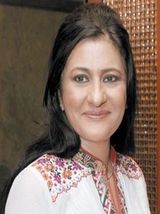 
Saba Hameed is an evergreen Pakistani actress who is working in the Showbiz since 1978 and has been a part of various notable serials. Saba is an ex-wife of Actor Waseem Abbas. She is one of those actresses whose Charisma can never fade away even after so many years. This article has all the information about Saba, including Saba Hameed Biography and Saba Hameed Family. It wouldn’t be wrong to call Saba an evergreen actress who is in the Showbiz Industry for the last 3 decades. Saba has been a part of various Pakistani dramas and plays and made herself recognizable with her powerful acting and personified personality. She is an epitome of beauty and grace who is still the crush of millions of people. Saba took the start of her career with PTV and that channel became a reason for her never-ending popularity and acknowledgment.

She was born on 21st June 1957 in Lahore. Currently, Saba is living in the same city with her family,

Saba has studied from Lahore College for Women University

Saba was born to a famous writer and a columnist Hameed Akhtar. She has 4 siblings out of which 2 have also worked with the PTV channel in the past including Huma Hameed and Lalarukh Hameed while her other 2 siblings Bushra Hameed and Umair Hameed never worked in this industry. She got married to Syed Pervaiz Shafo from whom she conceived 2 Children Meesha Shafi who is a well known Singer and Faris Shafi who’s an actor but unfortunately this marriage couldn’t last long and they got separated. After that, she got married to one of the versatile actors of the industry Waseem Abbas. Waseem already had a son from his first wife Ali Abbas who is another notable start of the Showbiz industry.

Saba started her acting career in 1978 and also worked in the theater until the 1990s. The play which made her recognizable in the media industry was a family drama ‘Family front’ in which she portrayed the role of Sumbal as a wife of Waseem Abbas. After this serial, her career actually started and she worked in several serials and got huge praise from the viewers. Other than Dramas she also acted in many Pakistani Films and even today we can say that she is one of the most accomplished and competent actresses of our industry.

Saba likewise appeared in many Lollywood movies. In 2015 she was shown in 2 comedy films including ‘Good Morning Karachi’ and ‘Jawani Phir Nahi Ani.’ More her roles received a massive response from critics and at the box office. In 2017 she became a part of another superhit film ‘Punjab Nahi Jaungi’ starring Humayun Saeed, Urwa Hocane and Mehwish Hayat.