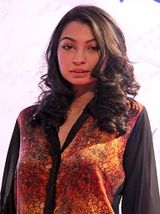 Rubya Chaudhry is a young, energetic, and talented Pakistani television and film actress, Model, and Singer. Though she doesn’t appear on the screen more often yet she makes sure that whenever she appears, that should be worth watching. She is married to notable musician Meekal Hassan. This article has all the information about Rubya, including Rubya Chaudhry Biography and Rubya Chaudhry Dramas. Rubya is a notable Pakistani model who is being recognized and acknowledged by every single soul because of her work that she has functioned as a model. After successfully establishing herself in the Modeling field, she went to the acting side and appeared in various Dramas and Movies. She amazes people by doing meaningful roles where women are shown to be brave and determined because she appears on the screen less. Though she is known for her modeling career yet, her few performances in dramas/movies also become a reason for her acknowledgment.

She was born on 3rd June 1987 in Karachi. Currently, Rubya is living in the same city.

She completed her secondary education from Karachi. Later she stepped into Showbiz to fulfill her dreams.

She got married to one of the notable Musicians of Pakistan, Meekal Hassan, who is known for his Sufi Rock band originated in Lahore. Both got married in 2016 after being engaged for many years.

Rubya gave a start to her glamorous career with Modeling. Her tall height and pre-eminent face became a bonus for her success, and with time her popularity increased. She has worked with many leading and prominent designers and has walked the ramp for them. Her commercials and photo shoots in magazines made her famous within no time. In an interview, she stated that Fashion is as challenging as acting.

After her successful journey of Acting and Modeling Rubya made her singing debut in 2014.