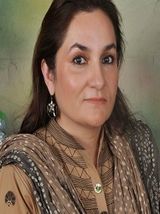 
Mehnaz Aziz is a Pakistani politician, educationist and Founding Director at Children’s Global Network who is currently working as a member of the National Assembly. Her husband Daniyal Aziz is also a politician associated with Pakistan Muslim League N. This article contains a blend of information about her including Mehnaz Aziz Biography and Mehnaz Aziz Family. Mehnaz Akbar Aziz is one of the most decent and elegant Pakistani politicians who is associated with Pakistan Muslim League N and is elected as a member of the National Assembly after winning the General Elections 2018. Other than serving as a Politician he is also an educationist and Founding Director Children’s Global Network. She also served in uniting partners for exchange towards change and an all-encompassing way to deal with training in strategy making.

She holds the degree of MSc in Anthropology which she attained from the Quaid e Azam University, Islamabad. She also did master’s in Gender and Development from the Institute of Development Studies, Sussex University.

Mehnaz Akbar was first seen in the politics when she was issued a party ticket for a member of the National Assembly in General Elections 2018 from the Constituency NA-77 (Narowal-I). He won the elections by securing 106,366 votes and gave defeat to her opponent Muhammad Tariq Anis who was contesting as an independent candidate. She was fielded by her Husband Daniyal in the Elections who himself got disqualified from the Elections by the Supreme Court.