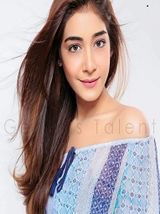 
Maryam Tiwana is a stunning and accomplished Pakistani actress who is in the industry since 2015 and has worked in many hit serials. She has achieved success with her diligence without having any artistic background. This article contains all the information about Maryam Tiwana biography and Maryam Tiwana career. Did you know that she made her debut in 2015? Maryam is a Young and beautiful Pakistani actress who is best known for her supporting characters in various hit serials since 2015. She had to work really hard to mark her name in the industry and to win the hearts of her fans because of not having any artistic background. She stepped into the Showbiz soon after completing her education from the University of Karachi. The young actress is currently single and is fully devoted to her career.

She was born on 20th December 1990 in Karachi and still resides there along with her family.

She is a well-educated girl in the Showbiz who did her schooling from the Karachi Grammar School. She holds the degree of Textile Merchandiser which she studied from the University of Karachi.

She made her acting debut in 2015 with a drama serial ‘Ek Thi Misaal’ starring Hina Altaf, Rabab Hashim, and Emmad Irfani. Her character as a supporting role was praised and appreciated by many people after which she started getting offers for various serials and from various directors. In 2016 she was seen in a serial ‘Bechari Mehrunisa’ opposite many young talents. In 2018 her drama serial ‘Thori Si Wafa’ on HUM Tv opposite Hiba Khan and many others became the top daily soap of that year which also got an award in HUM Awards. Currently, she is busy shooting for her new drama serial ‘Qismat’. She is famous for her supporting characters and the way she is establishing herself in the Showbiz is indeed worth praising.