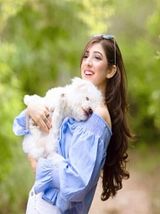 
Mariyam Nafees is an alluring Pakistani actress, model, and a wonderful addition to the Showbiz Industry who is often seen doing supporting roles with perfection. She is known for her role ‘Khajista’ in drama serial ‘Yaqeen Ka Safar’ which gave rise to her career. Other than actress she is also a strong supporter of Pakistan Tehreek e Insaf. This article contains all the complete information about her, including Mariyam Nafees Biography and Mariyam Nafees Dramas. Mariyam is a young and stunning Pakistani Actress and a model who is in the industry from the last few years. Still, her exceptional work and charismatic personality made her recognizable among many people. Mariam wanted to become a physician, but fate took her to the Showbiz Industry. She has an Empathetic and unconventional personality and is an enjoyable loving girl. She is unmarried and has one younger brother and sister.

She was born in Islamabad on 20th February where she spent all her life. Currently, she resides in the same city and often lives in Karachi for her work.

She did her schooling at American National while the high school at the convent.

She gave her small screen debut with a play opposite Waseem Abbas and Sajal Ali in which she had a guest appearance. After that different director approached her, and this is how her career started as an actress. Her debut drama was ‘Dyar-e-Dil’ where she did a supporting role. Although she had a little part to play, yet she gave the 100% that proved to be lucky for her because after that people saw her doing many super hit dramas including ‘Yaqeen Ka Safar’, ‘Yariyan’ and many others.

In spite of being an actress, she has extreme political views and is one of the dedicated supporters of Pakistan Tehreek-e-Insaf and Imran Khan. Other than an actress she is also Vice President NA 48, Youth Wing at PTI. In the past, she had been a part of their processions and raised her voice in favour of them.

She is very active on social media and mostly communicates with her fans.