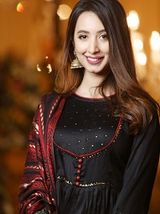 
Komal Aziz is a brave and talented Pakistani actress who don’t feel afraid to stand against oppression. Apart from fantastic acting skills, Komal never misses to amaze her fans for being human and always willing to stand for human rights. In 2019 she witnessed a murder and didn’t hesitate to bring it to social media. She is likewise a co-founder of a clothing brand, ‘Omal By Komal.’ This article has all the information about Komal, including Komal Aziz Biography and Komal Aziz Dramas. Komal Aziz Khan is a courageous, Intelligent and talented Pakistani actress and model who came from nowhere and won the hearts of millions of people. She aspired to be an actor since her childhood. She always knew that she is going to be part of the Showbiz industry one day despite her conservative background. Komal has been a part of various popular drama serials. She is one of the decent actresses who belongs to a middle-class family.

She was born on 13th April 1990 in Karachi. She has lived in America for a few years for her education. Currently, Komal is living in Karachi.

Komal remained an exceptional student throughout her educational period. She belongs to an extremely educated family. She did O levels and A levels from Beacon House. Later she went to the Institute of Business Administration, Karachi, to study business. After a few times, she got suspended for three years from the university after being caught doing the cheating. Later she applied for a university in America where she got admission on a 100% Scholarship. She holds the degree of Bachelor’s in Business and Commerce.

She belongs to a middle-class, conservative, and highly educated family. Her father studied Law but couldn’t pursue it as a career because of his values. He went to the banking side later. Komal’s younger sister is a doctor by profession. Komal is unmarried and fully focused on her career.

Komal made her small screen debut in 2015 with a daily soap ‘Ishq e benaam’ starring Mariyam Nafees, Mizna Waqas, and others. With her debut, she proved her remarkable acting skills and became a demand of many directors. Later, Komal appeared in many popular drama serials that increased her popularity. In 2019 her drama serial ‘Bharosa Pyar Tera’ became one of the most-watched serials of that year with a fantastic storyline.