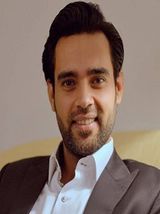 
Hassan Niazi is a decent and capable Pakistani actor, Model, and Director who is associated with the industry for a long time. He is known for performing various main characters beautifully. He knows how to make people fall for his character with his brilliant acting though Hassan is not very active when it comes to choosing dramas and movies yet his single appearance now and then is enough to increase his fan following. This article has all the information about Hassan, including Hassan Niazi Biography and Hassan Niazi Dramas. Hassan is an acknowledged Pakistani television and film actor who has succeeded in making his place in the industry and among his fans despite working in a few dramas and movies. Though he is always seen in a supporting role yet, his powerful voice and fantastic screen appearance are enough to captivate everyone’s attention towards him. Hassan always had the vision of becoming an actor, which took him to the Showbiz industry soon after his studies. Without having any artistic background, he tried his luck and somehow prospered in his dream. He is mainly known for his superb performance in drama serial ‘Sun Yaara.’

He was born on 3rd February 1981 in Lahore. Niazi is a resident of the same city yet often visits Karachi for his work.

He obtained his Graduation degree from his Hometown. Later he came to Karachi to try his luck in acting.

Hassan took the start of his showbiz career by performing a minor role in telefilm in 2007. The telefilm ‘Drama Fever’ proved to be an entrance for him in the Showbiz journey as he started getting offers from various production houses. There is not a huge list of his work, yet the work he has done over all these years reflects his determination, hard work, and maturity.

In 2008 he made his debut with a drama serial ‘Sipahi Maqbool Hussain’ as a supporting character. Later he did work in many popular serials and, with time, got fame for his brilliant performance in each role. In 2012 his serial ‘Ek Tamanna Lahasil Si’ starring Fahad Mustafa and Mawra Hocane also aired on Indian channel because of its popularity. In 2013 his drama serial ‘kankar’ opposite Sanam Baloch became one of the blockbuster serials of all time. Later in 2016, he appeared in another popular serial ‘Sun Yara’ that increased his fan following. When it comes to the selection of dramas, then Hassan Niazi is always on point.

In 2008 he debuted the big screen in the movie ‘Ramchand Pakistani’ along with Maria Wasti, Noman Ijaz, and others. The movie, directed by Mehreen Jabar, is based on the story of a young boy who accidentally crossed the border. The movie got a good response at the box office. In 2016 his other movie came at the box office titles ‘Maalik.’ The movie was a Pakistani political thriller directed by Ashir Azeem. The movie managed to collect more than 7 crores and became a hit. Hassan was also seen in an action film ‘Sher Dil’ opposite Mikaal Zulfiqar and Armeena Rana Khan.