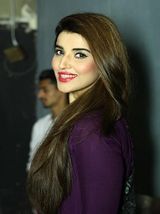 
Hareem Farooq is a successful Pakistani actress, Producer and  Host who started her Showbiz journey in 2013 and has achieved tremendous success in a short time. She has acted in various serials and many films and also co-produced a few Lollywood movies as well. This article contains all the information about hareem, including Hareem Farooq Biography and Hareem Farooq Dramas. Did you know that she is a cousin of singer Abdullah Qureshi? Hareem is a consummate and a well known Pakistani actress, a stunning model, an incredible host and also a producer who has produced few Pakistani movies till now. She doesn’t belong to an artistic background so whatever she has achieved today is her own diligence and dedication towards her work. Hareem is the only female Pakistani artist who got the privilege to host the opening ceremony of the 3rd Pakistan Super League which held in Dubai.

She was born on 26th May 1989 in Islamabad but Later her family moved to Karachi where they are currently living.

Hareem did her Schooling from the Karachi Grammar School, later she went to Quaid e Azam University Islamabad from where she completed her bachelors in Sociology and Journalism. Soon after completing her education hareem joined the Showbiz industry.

She belongs to a well educated and sophisticated family where her father is a public health PhD and international consultant while her mother is a dermatologist. She has 3 other siblings who don’t belong to the Showbiz Industry. One of her cousins Abdullah Qureshi is a big name in the field of music who is a self instructed musician and a singer who has his own band.