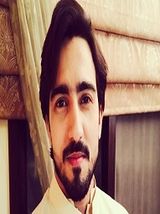 
Faraz Farooqi is a fetching Pakistani model and an actor who is considered to be one of the victorious actors of Pakistan who has achieved all the fame and love with his diligence and passion without having any artistic background. This article contains all the information about him including Faraz Farooqi Biography, Faraz Farooqi Family and Faraz Farooqi Dramas. Faraz is a good looking Pakistani actor and a model who is known for his supporting roles in various popular drama serials. He entered the Showbiz Industry following the footsteps of his twin brother Hammad Farooqi and has earned a huge fan following in a short span of time. The effort and diligence which he put in his character can be clearly seen from his exceptional acting in every next serial.

He was born on 7th September 1989 in Karachi where he spent all his life. Currently, he still resides there with his family.

He holds the degree of Bachelors in Business Administration which he attained from New ports institute of technology.

He was born in a non-artistic and an ordinary family. One of his brother Hammad Farooqi later joined the Showbiz Industry in 2010 and started appearing in various drama serials that gave motivation to Faraz and he too became a part of it. He got married to Shiza Khan in 2016. The couple is blessed with a beautiful daughter.