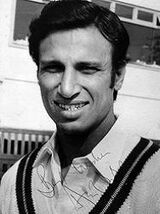 
Asif Iqbal Razvi is Pakistan’s cricket team’s former captain who had a very successful and renowned cricket career. Asif was good at all three departments of cricket. His vital skills were his batting, but he would also bowl during matches and was an excellent fielder. He led the national team in the first two world cups and got them through to the semi-final in the second World Cup. He also remained the captain of his county team Kent. After the retirement from cricket, Asif worked as a cricket match referee. This article has all the information about him, including Asif Iqbal Razvi Biography. Asif got his early education from Madrasah e Aaliyah School, Hyderabad (India), and then studied at Osmania University Hyderabad. Afterward, he came to Pakistan and graduated at S.M college Karachi, Sindh. He is a graduate in History and Economics.

Asif had a cricketing background as many of his family members had played professional cricket. His father, Majeed Rizvi, played for the Indian team. He was only about six months old when he lost his father. One of his uncle Ghulam Ahmed who was a former Indian cricket team captain and Off-Spinner, made Asif take an interest in cricket. He used to say to his mother that he would earn his livings from cricket, and he did not only earned a living but a lot of respect and fame too.