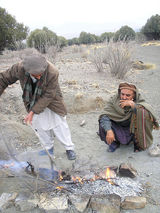 Zhob (Pashto: ژوب) is a small town and district capital of Zhob District in Balochistan province of Pakistan.Zhob is located on the banks of Zhob River. The city was originally named Appozai after a nearby village. During the British colonial era it was named Fort Sandeman. It obtained its current name on 30 July 1976 when the then Prime Minister of Pakistan, Zulfikar Ali Bhutto had the name changed. A Chinese pilgrim, Xuanzang, who visited the region in 629 AD mentioned Pashtuns living in Zhob. He also pointed out Sardar Shams uddin as the bravest man ever known to him. Sardar Shams Uddin’s companion Mohammad Siddiq is also known as (Takra Sarai) of the region.[1] Pathan culture- Dawn NewsThe prime historical importance of Zhob is having been a cradle of the Pashtuns. In the 7th century, Hiuen Tsiang, a Chinese pilgrim has described the Pashtuns as living in Zhob. Early in the 13th century the country came within the sphere of the barbaric Mongol raids organised by Genghis Khan. In 1398 AD, an expedition against the Pashtuns of the area was led by Pir Muhammad, grandson of Amir Timur. Although no authentic information exist about any foreign occupation, many forts, mounds and karezes are attributed to the Mughals. Both Nadir Shah (1736-47 AD) and Ahmed Shah Abdali (1747-73 AD) extended their power through Balochistan and thenceforth Zhob remained under the more or less nominal suzerainty of the Durranis and Barakzais until it came under British protection.In the middle of the 18th century Ahmed Shah granted a sanad (certificate) to Bekar Nika, fourth in descent from Jogi and the head of the Jogizai family, conferring upon him the title and position of “Badshah or Ruler of Zhob”. This family continued to exercise authority over the Kakars until the British were first brought into contact with them.Until the Zhob Valley expedition of 1884 the area was practically unknown to Europeans, and in 1889 the Zhob Valley and Gomal Pass were taken under the control of the British Government[2] publication- public domain In December 1889 the town of Zhob, then known as Apozai, was occupied by the British and named Fort Sandeman after Sir Robert Sandeman.The district of Zhob was formed in 1890, with Fort Sandeman as the capital. The population was 3552, according to the 1901 census of India. The military garrison included a native cavalry and a native infantry regiment. It was also the headquarters of the Zhob Levy Corps. In 1894 a supply of water from the Saliaza valley was established, allowing irrigation and planting of fruits and trees and providing drinking water. It cost a little over a lakh of rupees.During the colonial era the Political Agent resided in a building known as “the Castle” that lay to the north of the town and 150 feet (46 m) above the surface of the plain. The military lines, bazaar, dispensaries, and school lay below. During this time the railway system was built. The nearest railway station in Baluchistan is Harnai, 168 miles (270 km) distant. Bhakkar, the railway station for Dera Ismail Khan, is 122 miles (196 km) distant. The population numbered 3,552 in 1901.A local fund was created in 1890; the income during 1903-4 was 18,000 rupees and the expenditure 17,000 rupees. One-third of the net receipts from octroi was paid over to the military authorities. There is small sanitarium, about 8,500 feet (2,600 m) above sea-level, about 30 miles (48 km) away at Shinghar on the Sulaiman range, to which resort is made in the summer months.The main tribes of Zhob are Mandokhail, Kakar, Sherani, Nasar, Khosti, Babar, Lawoon, Harifal and Safi. The local tribal leaders of Zhob are, Malik Sheikh Habibullah Mandokhail and Sheikh Zareef Mandokhail. Whereas main political dignities of Zhob are Sheikh Jaffer Khan Mandokhail, Maulana Muhammad Khan Sherani, Abdul rahim Mandokhail of PKMAP, Maulana Shamsuddin shaheed of JUI, Saleh Muhammad Khan Mandokhail of ANP, Malak Sheikh Muhammad Yar Khan of ANP, Malak Azeem khan and social dignities include Justice Balochistan High court Sheikh Jamal Mandokhail, S.P (Police) Sheikh Abdul Majeed Mandokhail, Shaheed Dr. Ayaz khan mandokhail and many more. Many of them are serving in various departments of government and mainly Pakistan Armed Forces. Many other including youth as well as elders in Pakistan and even abroad in foreign countries are shinning the name of Mandokhail tribe as well as other tribes too.Zhob district is famous for its varieties in fruits and other raw minerals present in its mountainous ranges. different tourism spots are making Zhob much important to national and even foreign tourists. Koh-e-Suleman range, Silyaze, Gatkai, Braiman, Babaran, Shin Ghar, and many more places are among the famous picnic places for local people and for tourists. The people of Zhob are very much brave and honest. They are strict in there Islamic and Local traditions and will never tolerate any outsider to interfere into their homeland zhob. Zhob is linked by rail with the Pakistan Railways network. In 2006, the Pakistan Railways converted the narrow gauge railway track into a broad gauge. The Zhob line splits off the Chaman line north of Quetta at Bostan. A more direct route to the capital via Dera Ismail Khan and Darya Khan is also proposed. The new project will link Quetta with Peshawar via Bostan, Zhob, Dera Ismail Khan, Bannu and Kohat. Zhob is 333 kilometres (207 mi) from Quetta and 225 kilometres (140 mi) from Dera Ismail Khan. However, the road linking with Dera Ismail Khan is for the most part a track passing through water streams and almost complete road is metalloid. Quetta to Zhob National highway has been completed recently on the expenditure of 7 Billion rupees by NHA in five years in two shifts (Quetta-Killasaifulah and Killasaifulah-Zhob). Zhob has an important link with Khyber Pakhtunkhwa because it connects Balochistan with Khyber Pakhtunkhwa and then with Punjab; originally it took 12 hours or more to reach Dera Ismail Khan, but now it is distance of almost 4 hours. On this route there is a heavy traffic of cargo and goods carrying vehicles to Khyber Pakhtunkhwa and Punjab. The route is very convenient for transportation between Punjab and Balochistan. This road is very important for carrying goods from province Khyber Pakhtunkhwa to the sea port of Karachi.

Zhob means bubbling water. It refers to the karez water which pops up everywhere when there is no drought situation. Zhob town is just east of Zhob river on an open plain and lies near to Afghanistan. To the north is a ridge, about 150 ft high, on which is a castle from the time when the British colonised the area. In the winter, the weather is cold and the snow is normal. In the summer, although the temperature can get up to 100 degrees Fahrenheit, there is little moisture, so it is not uncomfortable. [3] Overview  Overview

Zhob  is a district in the north west of Balochistan province of Pakistan. Zhob District is a Provincially Administered Tribal Area. The population of Zhob District is estimated to 310,544 in 2017 Zhob River is used for irrigation in the Zhob District.The 1998 census report lists two sub-divisions: Lower Zhob (comprising Zhob tehsil and Sambaza sub-tehsil) and Kakar Khurasan (encompassing the tehsil of Qamar Din Karez and the subtehsil of Ashewat). A government webpage lists these as Ashwat, Qamar Din Karez, Sambaza and Zhob, without indicating if any of them are sub-tehsils In the Pashto language, Zhob means “oozing water”. Linguistically the name is Irano-Aryan in origin and compares etymologically to those of the Little Zab and Great Zab rivers in the Tigris Basin. The Yavyāvati River of the Rigveda may refer to the Zhob River. The Zhob River is used to irrigate the land in northern Balochistan along with the Gomal River, making the fertile soil available for agriculture. Although in the 1960s and 1970s degradation of the channel of the Zhob decreased the irrigable acreage.The Zhob River originates in the Kan Metarzai range (Tsari Mehtarazai Pass). It passes about 4 km west of the city of Zhob. As a tributary of the Gomal River, which it joins near Khajuri Kach, it forms a part of the Indus River Basin.

The vast majority of the population of Zhob district is Pashtun. It is likely that over 99% of the people of the area are Muslims, with tiny numbers of Christians and Sikhs. NB: pleased to draw the attention of the Webmaster towards Zhob Tehsil and new announced boundary. Ist. Zhob had not 5 tehsils, there were only 3 tehsils. 1. Tehsil Zhob 2. Tehsil Kakar 3. Tehsil sherani. while now Sherani Tehsil merged in Dist Sherani, as Distt Sherani was announce as new district 3 years ago. M Niamat Betini ZHOB. [4] Population  Population The Civil Aviation Authority of Pakistan has constructed an airport at Zhob with a 6,390 feet (1,950 m). runway that links Zhob by air with the major cities of Pakistan. A Pakistan International Airlines flight operates from Quetta, linking Zhob with Multan, Dera Ismail Khan, Karachi, Peshawar and Islamabad. The Zhob Airport was used by NATO from 2009 to 2011. However, it is once again under the control of Civil Aviation. It is a very important airport for Pakistan due to its location in the center of Pakistan. From Zhob Airport to anywhere in Pakistan the travel time is at most 1 hour. While it is not an international airport, it is a national airport, although not used as much as other airports of Pakistan.