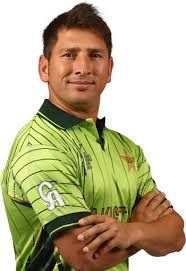 Yasir Shah (born 2 May 1986 in Swabi,[1] "Yasir Shah"- Cricinfo Khyber Pakhtunkhwa) is an international cricketer from Pakistan who is the second fastest bowler in the history of Test cricket to take 100 wickets. He is a specialist leg break spin bowler and is known for his leg spinners, flippers and googlies.Yasir Shah is a cricketer, who comes from the city of Swabi which borders Afghanistan. Predominantly a leg-spinner who can also bat a bit, he is a big fan of Shane Warne and hopes to emulate him. 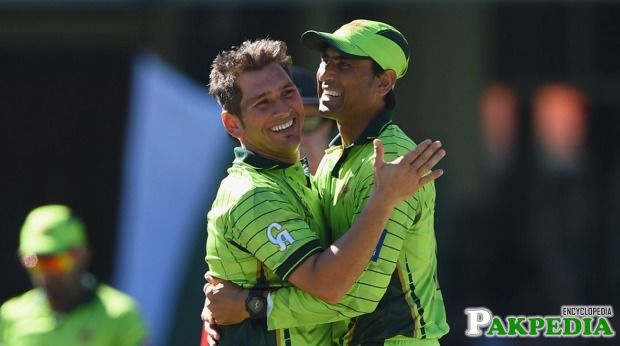 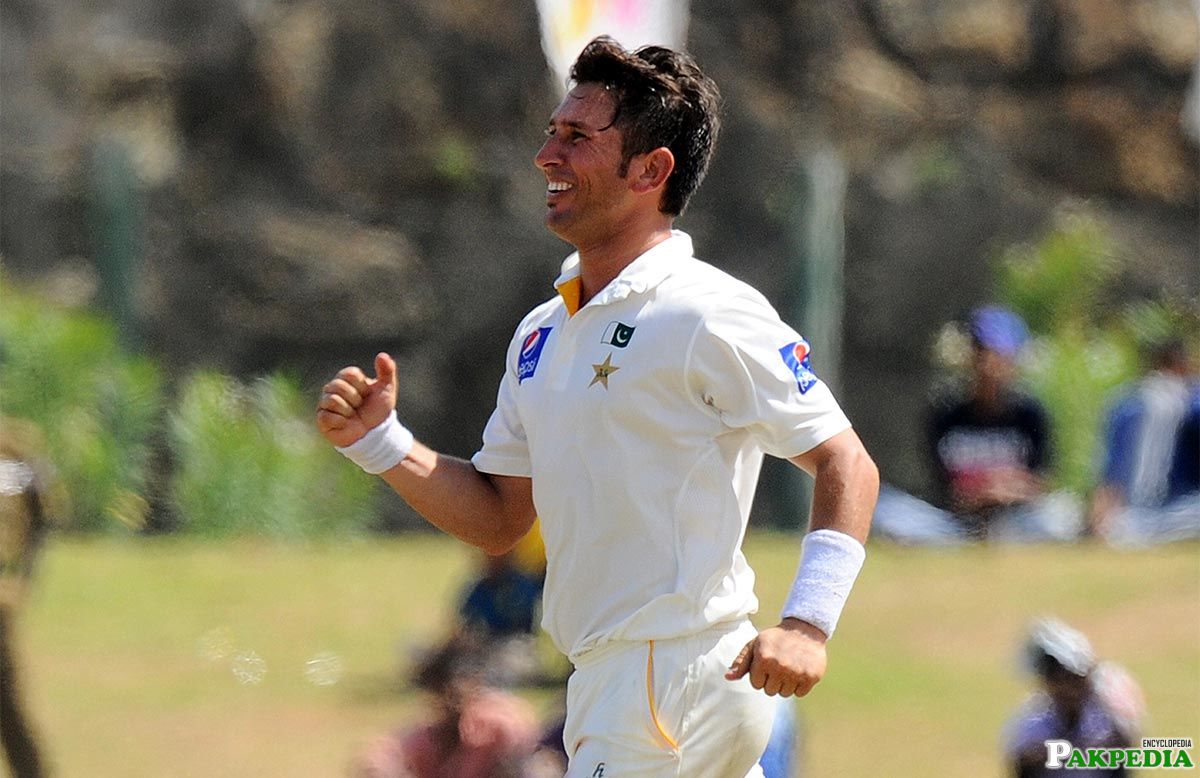 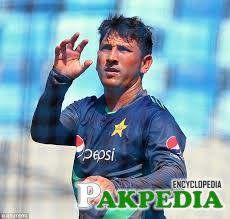 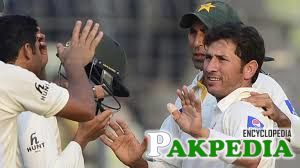 Yasir Shah with his Team 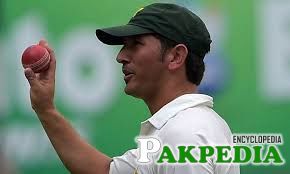 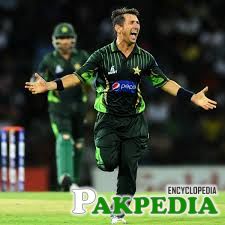 Yasir Shah made his first-class debut in February 2002 but had to wait nine years to play international cricket. An ODI and two T20s later, he was back out of the reckoning, seemingly forgotten forever. The recall, when it arrived, came at a time of crisis for Pakistan, when Saeed Ajmal was banned for chucking in September 2014.Shah made his Test match debut for Pakistan against Australia in the United Arab Emirates on 22 October 2014.[2] Australia tour - Emirates During Pakistan's tour of Sri Lanka, Shah became the fastest Pakistani bowler to take 50 test wickets.Shah is the cousin of Pakistan fast bowler Junaid Khan as well as of Australian international cricketer Fawad Ahmed.[3] Rookie spinner- examiner Shah has played for numerous teams in the Pakistani first-class domestic cricket circuit, including the Khyber Pakhtunkhwa cricket team, Pakistan A cricket team, Abbottabad Rhinos, Pakistan Customs cricket team, and Sui Northern Gas Pipelines Limited.He has also played cricket for the Pakistan A cricket team.

Shah has played for numerous teams in the Pakistani first-class domestic cricket circuit, including the Khyber Pakhtunkhwa cricket team, Pakistan A cricket team, Abbottabad Rhinos, Pakistan Customs cricket team, and Sui Northern Gas Pipelines Limited.He has also played cricket for the Pakistan A cricket team.Yasir didn't just grab the opportunity; he made everyone forget they were supposed to miss Ajmal, spinning his way to 12 wickets in his series.Yasir quickly won a horde of admirers including Shane Warne, who praised his "energy and shape on the ball, also his over spinner and patience", and proclaimed he would finish with more than.

In January 2015 he was selected in Pakistan's squad for the ICC Cricket World Cup 2015 and he was considered as a long-term replacement for Pakistan's banned off-spinner Saeed Ajmal. He made his World Cup debut against arch-rivals India on 15 February 2015.Even though he has not played ODI cricket for a while, the selectors have showed immense faith in him and have named him in the 2015 World Cup squad. He along with Shahid Afridi will be expected to do well in the World Cup. 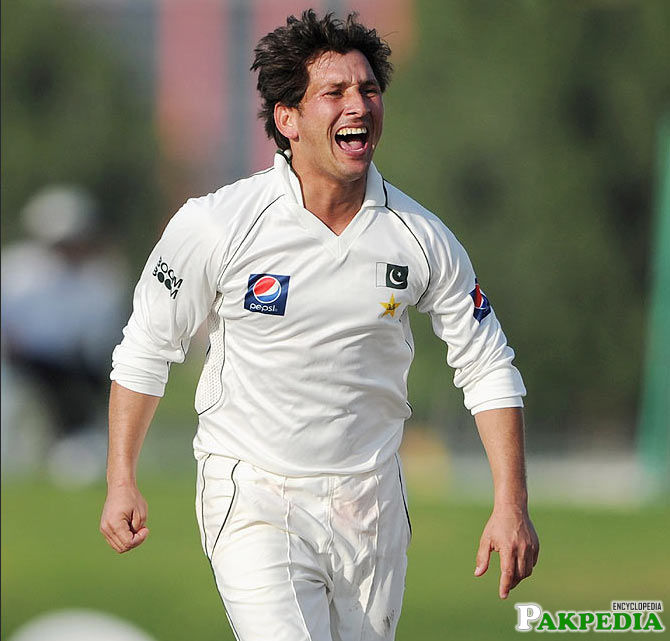 Shah become the first Pakistani bowler to take 50 test wickets in just nine matches. He has become the first Pakistani bowler to take early 50 wickets, while 5th spinner of the world overall. The early 50 wicket record for Pakistan in test cricket was previously held by Waqar Younis, Mohammad Asif and Shabbir Ahmed who completed their 50 wickets in ten matches. However, record for quick 50 wickets in Test Cricket overall is held by Charles Turner of Australia who completed his 50 wickets in just six matches.[4] Shah breaks- News Tribe Yasir Shah picked up 3 consecutive Five Wicket Hauls in three Tests against Sri Lanka further improving his Test Record.In July 2016, while on tour against England, Shah became the first leg spinner to take a 5-wicket haul in a Test match at Lord's since Mushtaq Ahmed in 1996. He also became the highest wicket-taking bowler in a single match from any Asian side at Lord's. On 18 July, 2016, Yasir Shah reached World # 1 in ICC Test Bowler's list.[5] Shah-first-legspinner- Cricinfo He displaced England quick Jimmy Anderson from the No. 1 spot in the ICC rankings for Test bowlers. He is the first leg-spinner since Australian Shane Warne in 2005 to be ranked No. 1, and the first Pakistan bowler since Mushtaq Ahmed in December 1996. However, eight days later following his poor performance in the second Test, he dropped four places to number five.At the end of his 13th test match, Yasir had 86 wickets to his and after 15, the total was 90. Both these totals are world record for any bowler after their 13th and 15th test match respectively.In his 17th test match against West Indies at Dubai, Yasir Shah took his 100th test wicket and became the second fastest ever to achieve this milestone, with only George Lohmann bettering it. He is fastest Pakistani to get 50 and 100 wickets in test.

Yasir Shah abandoned three New Zealand batsmen to come extremely close to turning into the quickest man to 200 wickets in Test cricket on the very beginning of the third and last Test in Abu Dhabi on Monday 3rd December 2018 and is all set to become the fastest man to reach 200 wickets in a Test cricket. Yasir now has 198 wickets in his 33rd Test, only two short of Australian leg-spinner Clarrie Grimmett's World record 200 wickets in 36 Tests accomplished in 1936.
Disclaimer: As an encyclopedia, pakpedia.pk's articles contains shared information which has collected from different sources and people. We welcome everyone for corrections and updates, Thank you.

Sohail Khan emerged from the depths of obscurity i