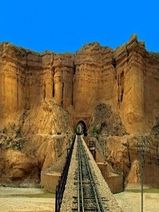 The province of Balochistan (or Baluchistan) in Pakistan contains most of historical Balochistan and is named after the Baloch. Neighbouring regions are Iranian Balochistan to the west, Afghanistan and the Federally Administered Tribal Areas to the north and Punjab and Sindh to the east. To the south is the Arabian Sea. The principal languages in the province are Baluchi, Pashto, Brahui, and Persian. The capital and largest city is Quetta.Balochistan is located at the eastern edge of the Iranian plateau and in the difficult to define border region between Southwest, Central, and South Asia. It is geographically the largest of the four provinces at 347,190 km² and composes 42% of the total land area of Pakistan. The population density is very low due to the mountainous terrain and scarcity of water. The southern region is known as Makran. A region in the centre of the province is known as Kalat.