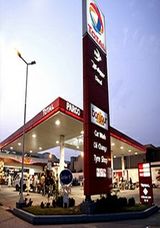 Pak-Arab Refinery (PARCO) is a fully integrated energy company and is the second largest company in the Pakistan corporate sector by sales (PKR 250BN+) and has an asset base of over PKR 141 billion. PARCO, a Joint Venture between Government of Pakistan and the Emirate of Abu Dhabi was incorporated as a public limited company in 1974. The Government of Pakistan holds 60% of the share holding while 40% of the shares are held by Emirate of Abu Dhabi through its Abu Dhabi Petroleum Investment Company L.L.C. (ADPI), a holding company with majority shareholding (75%) held by International Petroleum Investment Company (IPIC) and minority shareholding (25%) held by OMV, which is the largest listed manufacturing company in Austria. The major business activities include Crude Oil Refining and Transportation, Storage and Marketing of POL Products. With a refining capacity of 100,000 BPD, combined storage capacity of over one million tons, a marketing joint venture with TOTAL (France) and a technical support venture with OMV (Austria); PARCO is the strategic fuel supplier for Pakistan with a broad portfolio of operational ventures. The organization encompasses Pakistan largest refinery and 2000 km of cross country pipeline network, including that of its subsidiary PAPCO. In 2010 set up a Diesel Hydro Desulfurization Unit to ensure that Diesel produced by the refinery meets international Euro-II standards. PARCO also commissioned a Biturox® plant in 2012, which is expected to producing high quality road paving bitumen which is mandated for infrastructure development.
Most recently in September 2012, Pak-Arab Refinery completed its first acquisition by acquiring 100% shareholding of SHV Energy Pakistan, which prior to the acquisition was Pakistan’s largest LPG marketing company and PARCO’s strategic partner since 2001