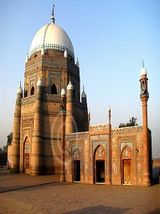 Multan, city of province Punjab, is famous as “City of Tombs”. A city that is ornamented by the nature with many historical and architectural beauty-holding buildings that we called or in some cases known as the shrines, mausoleums or tombs. These tombs and shrines have a huge spiritual value for us imagine about the worth of residents of that holy places that are buried there, whom we knew as the Oliya Allah (Saints). These personalities are unique and the true humans and respectable people for us. One of these great saints was, Shah Rukn-e Alam whose holy shrine lies in the city of Multan near Multan fort. The Shaikh was the son of Pir Sadar-Al-Din Arif born at Multan on the 9th of Friday Ramazan 649/26 November 1251. He was the grandson and successor of Shaikh Baha-Al-Din Zakariya. Shaikh Rukn-i-Alam (Rukn-al-Din) died on the 7th of Friday (735/3 Jamadial-Awwal, January 1335). He was buried in the mausoleum of his grandfather, according to his own will. After sometime, however, his coffin was transferred to the present mausoleum. [1] birth It was constructed, according to a popular belief, by Ghiyas-al-Din Tughluq (1340-1350) during the days of his governorship of Depalpur, but was given by Feruz Shah Tughluq to the descendents of Shah Rukn-I-Alam for the latter’s burial. The mausoleum of Rukn-I-Alam has been admired by not only the travelers and chroniclers but also by the art-historians and archaeologist who wrote the architectural history of the subcontinent. [2] Construction

Structural Beauty of the Tomb The beauty of Multan is the tomb of Shah Rukn e Alam (RA) and this will be your first sight due to its structural beauty, attractiveness and its titanic dome. The tomb of Shah Rukn e Alam(Ra) is situated near the fort of Multan. The structural beauty of the tomb is worthless. The tomb is a clear picture of earliest architectural style of Multan. The entire tomb was built with the red color bricks that have wood frame supporting. The external part of the tomb was decorated with glassy and colorful faience ceramic and colored stone pieces that are a clear picture of old mosaic artwork. The most prominent article of that tomb is the dome that was considered the world second largest dome. The grave of Shah Rukn e Alam is made with simple bricks. In fact, the tomb was built by Emperor Ghias-ud-din Tughlak as his tomb, but later gifted by the spouse of the Emperor to Shah Rukn e Alam (RA). The tomb of Shah Rukn-i-Alam was built by the Tughluq ruler of Delhi, Ghiyas-ud-din (r. 1320-1325), between 1320 and 1324 AD. Although probably intended as a mausoleum for is own dynasty, it was presented to the family of the renowned Sufi saint following the latter’s death. The three-tier structure stands within its own compound at the north-western edge of the Fort. It is octagonal in shape with an interior diameter of 15 metres and the first tier’s 4 metre thick walls assisted by 8 engaged corner towers or buttresses with a clear slope, support an 8 metre octagon surmounted by a dome with a diameter of 15 metres. The 35 metre high structure is constructed in red brick with a visible framework of beams of shisam wood. The exterior is further ornamented with the use of carved brick and wood as well as blue and white faience mosaic tiles with raised relief patterns. The octagon is decorated with geometric, floral and arabesque designs and calligraphic motifs. The interior, although originally plastered, is bare and the sarcophagus of the saint is surrounded by those of 72 of his descendants. The saint is still revered today and his tomb is the focus of the pilgrimage of over 100,000 pilgrims from all over South Asia who visit and commemorate his memory. The carved wooden mehrab is though to represent the earliest example of its category. [3] architecture

Holy Atmosphere at the Tomb The visit of the shrine of Shah Rukn e Alam is a great experience of the human’s life. The birds and especially the pigeons are recognized as a symbol of peace in all over the world. You will be welcomed by the sweet voices of the pigeons that show the peaceful and relax environment of the tomb. Mannat (Demand/ Request/Promise) is the common activity of the people while visiting the shrine of Shah Rukh e Alam. There are a lot of pieces of colorful threads you will find on the doors of the tomb that were tied up by the visitors as the memory of their Mannat. When they have been rewarded according to their desire they untied the threads. Conservation commenced in late 1971 and was completed in six years. Because of the monument’s dilapidated condition the repair work required was extensive.  This project required the establishment of a training programme for Pakistani craftsmen in the traditional crafts of glazed Multan tile work, wood carving and terra cotta. Indigenous craftsmen who had inherited the knowledge of these crafts trained a total of 33 novices, now active in other conservation efforts as well as in new building. The way of conserving this fourteenth-century monument was to restore all the damaged parts of the building as nearly as possible to their original appearance. Those parts of the tomb only slightly damaged, however, were left untouched in order to convey a sense of age. [4] Renovation

The Architects Approach to the problem The decision was made to restore all damaged parts of the building as nearly as possible to their original condition where parts of the building were only damaged in a minor way. More controversially, the tombs which were in the porch and on the platform were all removed (with the exception of one or two over which legal court cases were still pending) and an outer vestibule which had been added after the original entrance vestibule was removed. the entrance portico to the platform was demolished and rebuilt in a style imitating1 that of the period of the mausoleum. The original construction, in 1971 the architect set about reemployment of traditional craftsmen who had inherited through their family some knowledge of the 14 of the building crafts used in this building which had largely fallen into disuse or had become seriously altered with time. Under the direction of the site supervisor and sub-engineer, an outstanding mason, a woodcarver and a tiler were found and together they trained a total of 33 craftsmen in the revived techniques which were perfected by trial and error over a long period. Every year in the month of April the Uras of this Holy saint is celebrated with great respect. The countless pilgrims of Shah Rukn e Alam celebrate his Uras under versus of Holy Quran. The opening ceremony of the Urs is the ghusal-e-Mubarik (Grave wash) of the grave of Shah Rukn e Alam (RA) with rose water. After that flower-patterned wreaths put down on the grave of the saint. This is the sign of the opening of the urs. [5] urs