The Thar Desert is a large, arid region in the northwestern part of the Indian subcontinent and forms a natural boundary running along the border between India and Pakistan. With an area of more than 200,000 km2 (77,000 sq mi), covering parts of Bikaner and Jodhpur divisions in the Indian state of Rajasthan, and some region of the states of Punjab, Haryana and Gujarat, it is the world’s 18th largest subtropical desert.Â [1] world’s 18th largest subtropical desert. 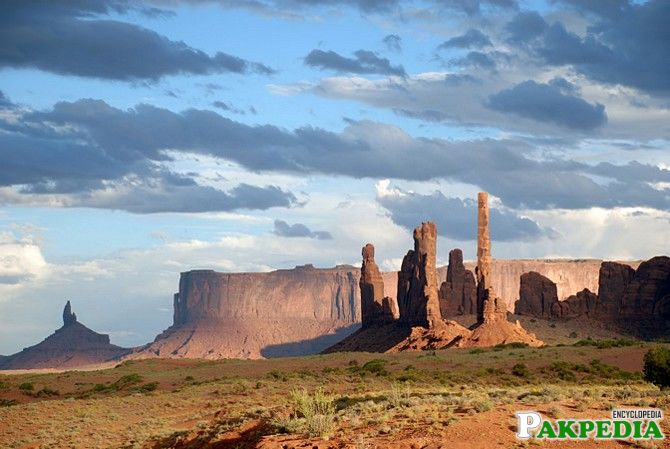 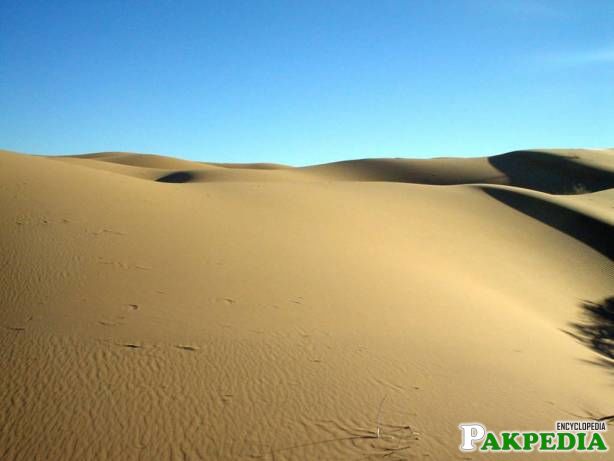 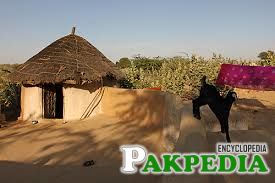 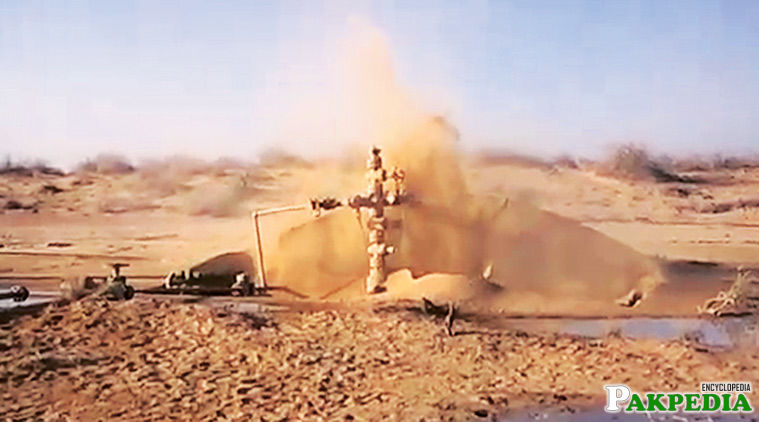 This large ecoregion lies to the west of the Aravalli Mountain Range in northwestern India and includes the deserts that cover portions of the Indian states of Gujarat, Rajasthan, and Punjab, as well as the Punjab and Sind in Pakistan.
The climate is extreme: annual temperatures can range from near-freezing in the winter to more than 50(C during the summer. All rainfall is associated with the short July-September southwest monsoon that brings a mere 100-500 mm of precipitation (Hawkins 1986). About 10 percent of this ecoregion is composed of sand dunes, and the other 90 percent of craggy rock forms, compacted salt-lake bottoms, and interdunal and fixed dune areas (Grewal 1992).
The habitat is greatly influenced by the extreme climate. The sparse vegetation consists of xerophilious grasslands of Eragrostis spp. Aristida adscensionis, Cenchrus biflorus, Cympogon spp., Cyperus spp., Eleusine spp., Panicum spp., Lasiurus scindicus, Aeluropus lagopoides, and Sporobolus spp. (Mares 1999). Scrub vegetation consists of low trees such as Acacia nilotica, Prosopis cineraria, P. juliflora, Tamrix aphylla, Zizyphus mauritiana, Capparis decidua, and shrubs such as Calligonum polygonoides, Calotropis spp., Aerva spp., Crotalaria spp., and Haloxylon salicornicum. Haloxylon recurvum is also present (Puri et al. 1989; Mares 1999).Â [2] Location and General Description

Tharparkar consists of two words, Thar means â€˜desertâ€™ while Parkar stands for â€˜the other sideâ€™. Years back, it was known as Thar and Parkar but subsequently became just one word â€˜Tharparkarâ€™ for the two distinct parts of Sindh province. On the western side, Parkar is the irrigated area whereas Thar, the eastern part, is known as the largest desert of Pakistan with a rich multifaceted culture, heritage, traditions, folk tales, dances and music due to its inhabitants who belong to different religions, sects and casts. The Parkar area has been formed by the alluvial deposits of river Indus while Thar mostly consists of barren tracts of sand dunes covered with thorny bushes. The only hills of the district, named Karon-Jhar, are in the extreme south-east corner of Nagar Parkar Taluka, a part of Thar. These hills are spread over about 20 kilometers in length and attains a height of 300 meters. Covered with sparse jungle and pasturage, they give rise to two perennial springs as well as streams caused after rain.

The Thar area has a tropical desert climate. The months of April, May and June are the hottest ones during the day. The average maximum and minimum temperatures during this period remain 41 centigrade to 24 centigrade respectively while December, January and February are the comparatively coldest months with average maximum and minimum temperatures 28 centigrade to 9 centigrade respectively. Rainfall varies from year to year. Most of the rain falls in the monsoon months between June and September whereas the winter rains are insignificant. [3] Topography & Climate 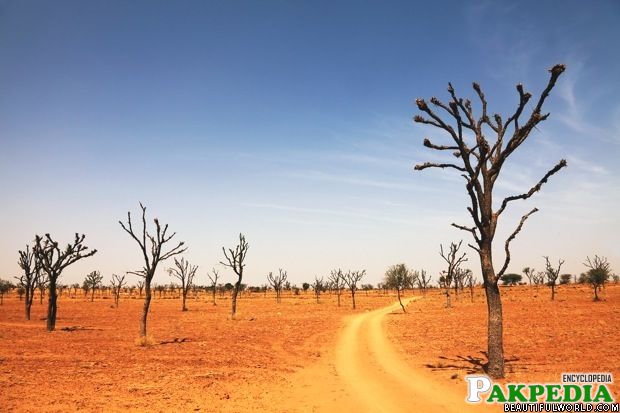 The Thar’s desert sands overlie Archean (early Precambrian) gneiss (metamorphic rocks formed between 4 billion and 2.5 billion years ago), Proterozoic (later Precambrian) sedimentary rocks (about 541 million to 2.5 billion years old), and more-recent alluvium (material deposited by rivers). The surface consists of aeolian (wind-deposited) sand that has accumulated over the past 1.8 million years.
The desert presents an undulating surface, with high and low sand dunes separated by sandy plains and low barren hills, or bhakars, which rise abruptly from the surrounding plains. The dunes are in continual motion and take on varying shapes and sizes. Older dunes, however, are in a semi-stabilized or stabilized condition, and many rise to a height of almost 500 feet (150 metres) above the surrounding areas. Several playas (saline lake beds), locally known as dhands, are scattered throughout the region.

The soils consist of several main groups”desert soils, red desertic soils, sierozems (brownish gray soils), the red and yellow soils of the foothills, the saline soils of the depressions, and the lithosols (shallow weathered soils) and regosols (soft loose soils) found in the hills. All those soils are predominantly coarse-textured, well-drained, and calcareous (calcium-bearing). A thick accumulation of lime often occurs at varying depths. The soils are generally infertile and, because of severe wind erosion, are overblown with sand.
The amount of annual rainfall in the desert is generally low, ranging from about 4 inches (100 mm) or less in the west to about 20 inches (500 mm) in the east. Precipitation amounts fluctuate widely from year to year. About 90 percent of the total annual rainfall occurs during the season of the southwest monsoon, from July to September. During other seasons the prevailing wind is the dry northeast monsoon. May and June are the hottest months of the year, with temperatures rising to 122 °F (50 °C). During January, the coldest month, the mean minimum temperature ranges between 41 and 50 °F (5 and 10 °C), and frost is frequent. Dust storms and dust-raising winds, often blowing with velocities of 87 to 93 miles (140 to 150 km) per hour, are common in May and June.

The desert vegetation is mostly herbaceous or stunted scrub; drought-resistant trees occasionally dot the landscape, especially in the east. On the hills, gum arabic acacia and euphorbia may be found. The khajri (or khejri) tree (Prosopis cineraria) grows throughout the plains.
The thinly populated grasslands support black bucks, chikara (gazelles), and some feathered game, notably francolins (partridges) and quail. Among the migratory birds, sand grouse, ducks, and geese are common. The desert is also the home of the endangered great bustard. [4] overlie Archean (early Precambrian) gneiss 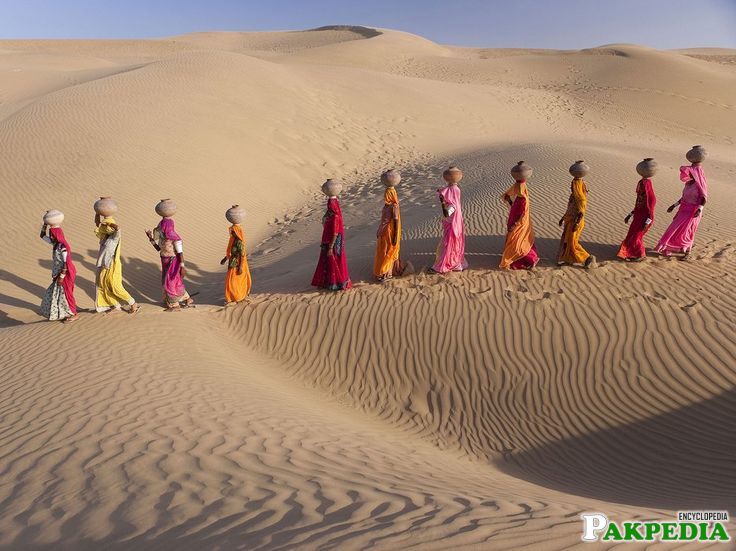 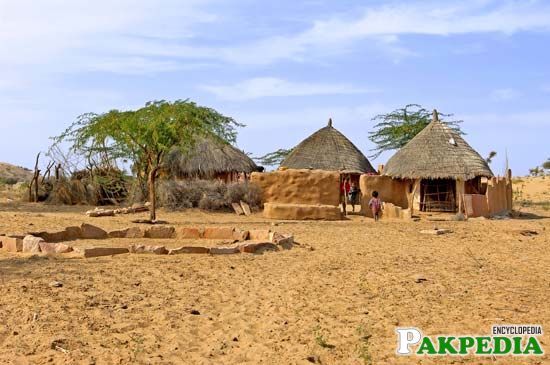 It’s a vast, hot, dry, dusty, shady desert area stretching from the corner of Interior Sindh of Pakistan up till Rajasthan and Gujarat over the other side there in India. Water is a main problem here, food is insufficient, and education is luxury. Thar or Tharparkar desert is where about one and half million tribal people, living in more than 800 widespread villages, survives their life, with their cattle, despite all of the hardship.

Umerkot is a small, busy town connecting the desert to the interior Pakistan. It’s a vital survival for the people from the deep desert. Umerkot is not a common Pakistani city. It boasts the point of world history as the birth place of the biggest Mughal king, Akbar. And what makes the town special: it has the largest Hindu inhabitants proportion in this Islamic Republic of Pakistan. Most of the people, some claimed seventy percent, are Hindus. If might said, Umerkot is the little India of Pakistan. The town has some offices, a bustling bazaar, rows of shops, and decent schools. For the people in the desert, Umerkot, as other little towns surrounding the desert, is source of life. As the desert now can not provide food to sustain the life (after years of drought), the bazaar of Umerkot with flourishing fruits and vegetables is crucial. It’s also where the uneducated tribal people get money from: they work as labour, they sell their frustratingly thin and unhealthy cattle, or they beg for money here.
Many parts of the desert are now reachable by public transport. The government has built quite good road infrastructure to connect some big villages in the deep desert to outside world. Even the remote Naga Pakar and Indian border of Kokhrophar are now accessible by public bus. The buses are mostly very old, but it provides cheap transport for the villagers. There are several buses serving many different routes, waiting for passengers in the bus terminal of Umerkot everyday. The schedule of departure and arrival is very limited, and suited to the villagers needs. The bus usually departs early morning from the deep desert bringing all of the villagers who are going to town to shop or to trade, wait until the afternoon in the town, and go back with almost the same passengers, happy to go home, back to the deep desert.

I was in a busy and crowded old bus, going to Ramsar, a village in the interior of Thar Desert, with Jamal who was going to take me to his home village. Jamal is a teacher, and just attended social worker training provided by the Sami Samaj Sujag Sangat organization in Umerkot. The bus was full of people. Women passengers got special place at the middle part of the bus, everyone got a seat. The male passengers were squinched together in some rows of seat behind the driver and at the end of the bus, together with sacks of materials and vegetables they bought from the bazaar, and also live chicken. People in rural areas of Pakistan prefer to buy live chicken rather than chicken meat, so that they may enjoy fresh chicken meat at any time they want. But it also turned the house to be a small â€˜poultry farmâ€™. Jamal knew that I was suffering from my sickness, that he even borrowed a cooler to keep the water and ice cold, so that I may keep drinking cold water during my stay in the hot desert. It was unnecessary though.

Ramsar is located 25 km away from Umerkot, and it took about 75 minutes to reach. The bus actually goes further until Mithi, a small town in the deep desert. It seems that the ticket seller knows everybody in his bus, that he didn’t need to ask for destination when collecting tickets. The ticket price also depends on the distance. For the 25 km distance, Jamal had to pay 25 Rs. The journey was not always easy. The smooth sand from the desert is easily transported by the wind to cover the main road. And this old bus is not a jeep. It can not pass through the sand. And it comes the turn of the passengers to do a little bit labour, to make the path for the bus by removing the sand with everything possible: shovel, wood, and even palms of their hands. It reminded me to bus journey up north there in the mountainous areas of Pakistan, where the passengers has to do work together to remove the stones that blocked their way, brought by landslides after rain shower. But here is another world in the same country. [5] Thar Desert  Life of Survival 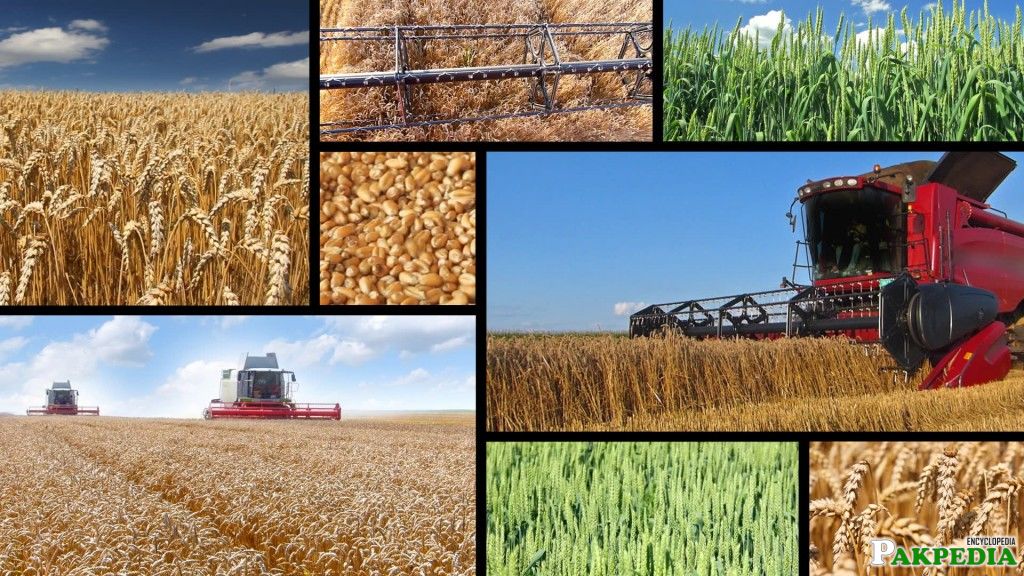