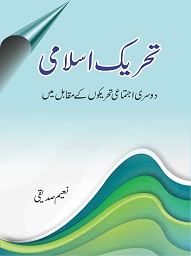 Tehreek e Islami is an Islamic (related to fighting authority or causing huge, important changes) religious and political party of Pakistan.Its head office located is in Karachi Sindh Pakistan.PartyÂ was founded by the author and Islamic educated person Naeem Siddiqui and his fellows in 1994 following their leaving/quitting (of a large number of people) from Jamaat-e-Islami (JI) in 1993, after their differences with its leadership on the matter of party policy that led to the failure of Jamaat e Islami in the politics of Pakistan.

Tehreek Islami have main objective to make Pakistan an Islamic state through a gradual process.Tehreek e Islami stricktely opposes secularism,communism,capitalism, liberalism ,nationalism and fascism as well as immoral and illegal practices in social,political and economic domains.Political Parties Jamaat-e-Islami and Tanzeem-e-Islami its members form an elite with "affiliates" and then "sympathizers" beneath them. In 1996, the party split into two groups,1st group was led by Naeem Siddiqui himself while the coordinator of the 2nd group was Hafeez ur Rehman Ahsan.Due to the endavour and mediation of some Arab based Pakistani friends both the groups were re-united in 1998,he expressed the story of re-uninion in a letter to his friend Khwaja Maqbool Ellahi in 2001 by saying that our difference was unique and now our union is also very unique.After the unity of both the groups of the tehreek e Islami Naeem Siddiqui became its spiritual and political Qauid(leader) but he refused to become the Ameer of the Tehreek e Islami due to his illness. The party leader is called an ameer.[1] details
Disclaimer: As an encyclopedia, pakpedia.pk's articles contains shared information which has collected from different sources and people. We welcome everyone for corrections and updates, Thank you.