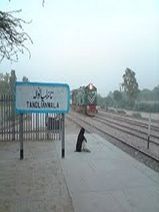 The Town was established as Mandi (Market) during the colonization of west Punjab. In 1887, it was given the status of sub tehsil and the town committee came into being during 1965. During 1966-1990, the town expended rapidly because of Construction of Bridge over the Ravi. Before the independence of Pakistan the city was a food supply for villages and nearby areas. The old name of the city was Tandla Mandi (Tandla Market).  [2] Established –  Established As per Population Census Report of 1998, the town is spread over an area of 1284 Square Kilometers with total population of 5,40,802 which is almost 690,563 in 2014 indicating that the growth rate of the city is 3.37 percent per annum. Before the partiotion there was a majority of Sikh & Hindus in the city, then migrated to India. While settlement of Muslim refugees from East Punjab and Haryana who came from India. There are other two urban localities in Tandlianwala Municipal committeeand: Mamoon Kanjan and Kanjwani. The Town has 28 Union Councils, 3 Urban and 25 Rural Union Councils.[3] Population –  Population The level of education is increasing day by day in Tandlianwala. There are two colleges in the city, one for boys and another for girls. Nowadays there are many private schools open along with many government schools. The most famous school of Tandlianwala is Govt. MC High School TWL, Govt. High School No.1 Tandlianwala and in private sector we can say Edify Science Model High School, Faiz Nursary School 411GB uthwal, is on the leading side. Other schools are Allied School, Dar-e-Arqam etc. Punjab group of colleges has also started branch in Tandlianwala which will be a great addition to education sector in this city.[6] Education –  Education

Tandlianwala has a lot of sports like Cricket, Football and Volley Ball. The boys of Tandlianwala play cricket in evening at different places. Mostly at the ground of MC High School or the so-called Doonga Ground. There is also an under construction cricket & hockey stadium which will be at national standard level.[7] Sports –  Sports The town is also well known because of the high quality of sugarcane. It has two sugar mills and dozen of cotton factories, rice factories and flour mills. The city is traditionally known for pure Desi Ghee, though it is rare now.

The people of this city took an active part in the struggle for independence of Pakistan (Freedom Movement). The city was originally developed around a grain market. Its police station was established as early as 1905 and prior to that only a police checkpost existed.[8] People of city

Politically, it is the most important Tehsil of Faisalabad District. Mian Manzoor Wattoo, the former chief minister of Punjab was elected from this constituency in 1993, while he lost in his home constituency. The name of the city comes from a herb “Tandla”, which was grown in abundance.[9] Politics –  Politics