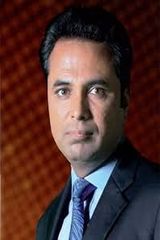 Talat Hussain went to school in Rawalpindi and did his masters from Quaid-e-Azam University in Islamabad. He is married to his first cousin, Tehmina Hussain. They have 3 children together. Talat Hussain describes himself as ” Journalist, writer, obsessive jogger, voracious reader, massive meat-eater”.He takes himself and his profession very seriously.

On the 30th of May 2010, Hussain was aboard the convoy amid conflict during the Gaza flotilla clash.Due to loss of communications, Hussain’s status and whereabouts are unknown although a spokesman for the Ministry of Foreign Affairs (Pakistan) stated “the Government of Pakistan is seriously concerned over the well-being and whereabouts of the Pakistani citizens and media personnel including Syed Talat Hussain and Raza Mahmood Agha (both of them from AAJ Television) who were on board the Flotilla bound for Gaza. The Foreign Ministry is in constant touch with its Missions in the region to ascertain the well-being of our nationals.” and on June01,2010. he was released via Shah Abdullah II of Jordan and he came back Karachi via Dubai

Syed Talat Hussain is one of the foremost journalists in Pakistan. He is the senior manager director of one of the most preferred Pakistani Private Channel AAJ Television. He has also got the ability to write for News line, Daily Dawn, Time Magazine, Daily Times (Pakistan), Daily Express and infrequently contributes to India Today. Almost 20 years of experience in journalism Syed Talat Hussain belongs to a family who has been connecting with journalism so he has also got a journalism background from his family. Since 1990’s he has been playing a vital role and has been outstanding as a host in TV Program. He has broken ground-breaking view of Morning News Shows in Pakistan. Accordingly in late 90’s he directed a renowned morning news show called Sawaray Sawaray on PTV which was very popular among all ages of people in Pakistan.[3] Talat Hussain early career KARACHI: Renown anchorperson  Talat Hussain has joined Geo news and he will be seen in a new program.According to sources, the anchor will host a political show “Naya Pakistan” in the channel, which will be on air three days in a week.He will also present his services in famous newspaper Jang through his columns both in English and Urdu languages.
It is pertinent to mention here that the anchorperson had tweeted earlier in which he revealed that he left Aaj news and join another channel.[4] Talat Hussain Join Geo news

KARACHI: ‘Naya Pakistan’ a current affairs program covering all political and social issues will be broadcast on Geo News at 8:05 PM (Friday-Sunday). The program will be hosted by the saner voice from the unbiased, balanced school of thought, Talat Hussain who will bring decades of his journalistic experience and repute of being one of the most honest and esteemed opinion makers.Mr. Hussain will conduct his shows from Islamabad and will occasionally do shows on important issues with audience to get direct feedback from the masses[5] Talat Hussain on geo news