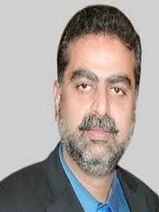 Syed Zaeem Hussain Qadri son of Syed Saleem Hussain Qadri was born on December 25, 1964 in Lahore. He obtained the degree of LL.B. in 1988 from Quaid-e-Azam Law College, Lahore and that of MBA in 1991 from Canadian School of Management Sciences. A lawyer, who remained Member, Provincial Assembly of the Punjab during 2008-13 and functioned as Special Assistant to Chief Minister on Higher Education and Youth Affairs. He has been reelected as Member Punjab Assembly for the second consecutive term in general elections 2013 and is functioning as Minister for Auqaf & Religious Affairs. He has extensively travelled abroad including USA, UK, Saudi Arabia, Dubai, Denmark, Bangkok, Singapore, France, Turkey, India, Iran and Switzerland. His wife, Syeda Uzma Qadri is a sitting MPA from W-302. His uncle, Syed Shamim Hussain Qadri, former Chief Justice, Lahore High Court remained a Member of Punjab Legislative Assembly during 1951-55 and Member, Provincial Assembly of West Pakistan during 1956-58.[1] Qadri son of Syed – Saleem Hussain Qadri Syed Zaeem Hussain Qadri son of Syed Saleem Hussain Qadri was born in Lahore on 25th December 1964. He did his matriculation from St. Anthony’s High School Lahore and proceeded to FC College for his intermediate. He then joined Government College Lahore and graduated as a proud Ravian with a Bachelors degree in Sciences.His family’s love for the profession of Law made him to do his LLB from Punjab Law College.  He belongs to a very famous family of lawyers. His grandfather, Syed Naubahar Hussain Shah was a barrister. His uncle, Syed Shamim Hussain Qadri was the chief justice of Lahore High Court. His four cousins are practicing lawyers. Albeit his father is a businessman by occupation, he is also a law graduate.He finally ended up mastering the nitty gritty of management by completing his MBA from Canadian Institute of Management.[2] His family’s love for the – profession of Law Zaeem pursued his professional career as a banker and worked in Societe Generale Bank for 14 years. As of today he is managing his own business and takes keen interest in politics.He has two brother and two sisters. He got married in 1991 and has been blessed by a son ProfileNamed Ali, who is currently 4 years old.He actively played first class cricket which includes one day international match against West Indies and county cricket in England from Manchester.[3] Zaeem pursued his  —-   professional career Syed Zaeem Hussain Qadri is a third generation Muslim Leaguer. His family has the unique honor of receiving three gold medals from Nazria e Pakistan Foundation awarded to his grandfather; his uncle justice retired Syed Shamim Hussain Qadri and his father Syed Saleem Hussain Qadri.He entered active politics at the age of fourteen from the platform of PML in Tahreek e Nizam e Mustafa in 1977. Politics is in him to a seriously deep extent, for his mother Syeda Farrukh Sultan was senior vice president of PML women wing and father Syed Saleem Hussain Qadri was president PML Punjab.Zaeem got elected as the General Secretary in the student union of FC College, Lahore from the platform of Jamiat in the year 1982. It was after this initial booster that he excelled in politics from the platform of PML (N) and held many a portfolios which included:[4] Qadri is a third generation – Muslim Leaguer Zaeem feels that Pakistanis have got educated and have realized the power of their vote by defying dictatorship. Moreover, recent structural changes make him see a bright future for Pakistan, 20 years down the line.
He opines that the public at large must be empowered, and it shall make things brighter for Pakistan.The panacea is an independent judiciary, he maintains.He draws inspiration from Ahmedinejad and Nelson Mandela. He also regards the noble work of Imran Khan but feels that instead of health, education is something which must be given its due by the well-to-do of the society.[5] Zaeem feels that Pakistanis – got educated

Zaeem believes that PML(N) is the only party who stands by the ‘Pakistan Resolution’ and helps in maintaining Pakistan’s identity. He finds the rule of the despot as a natural blessing to cleanse the party of Unionists and now PML(N) is pure, and has nothing to do with PML(Q). He finds substance in leaders from the past such as Mr Junejo and among the contemporary leaders he praises Nawaz Sharif as the true leader of the masses.[6] who stands by the —–  ‘ Pakistan Resolution He has been a sportsman all through his youth and still loves to watch Cricket, Squash and Swimming. Spending time with his family rejuvenates him to a great degree. He likes to read Newspapers and finds the writings of Ayaz Amir and Irfan Siddiqui quite interesting. He also liked the work of Khalid Hassan (late).He likes the poetry of Ghalib and Iqbal. He has also read books written by Javed Hashmi, and urges the youth to read and learn from the biographies of great men. He is also fond of music and likes listening to Mehdi Hassan, Nur Jehan and Rafi; apart from the semi classical music which he adores. He likes pets and feels that he has inherited the love for birds from her mother. He loves travelling and has been to many a countries amongst which he loves England and Denmark the most.[7] He likes the poetry of –   Ghalib and Iqbal