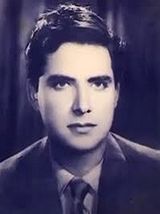 Syed Moosa Raza also famous as Santosh Kumar is known as first romantic hero of Pakistani film industry. He worked in 1950’s and 60’s. He was the son of Syed Dawood Musa. Syed Musa Raza better known as Santosh Kumar was a famous Pakistani film actor of 1950s and 1960s era. He belonged to a well educated family of syeds from Uttar Pradesh, India. His brother Darpan (Syed ishrat abbas) was also a renowned film actor during that period. His other brother S. Suleiman was a renowned film director. Santosh Kumar was Pakistan’s super star film hero along with Sudhir but he was the first ever top romantic hero.

He graduated from Osmania University, Hyderabad, where he passed the I.Sc. (pre-graduate course) examination with high marks. Santosh Kumar was often offered roles in government, but he declined in favour of people he felt were better suited for such positions. [1] education

Owing to his education and awareness, Santosh Kumar was always designated to lead the entourage to represent Pakistan in meetings held abroad, and because of this became known as the foreign minister of the Pakistani film industry. This was revealed by him in one of his interviews broadcast by the Radio Pakistan in the mid sixties. Initially, he was married to Jameela Begum, but subsequently married actress Sabiha Khanum. During the location shooting of the film ‘Wada’, Santosh-Sabiha had developed tremendous understanding. Hence they decided to marry and became hero-heroine in their real life, too !. They ‘re blessed with a son named Syed Ahsan Raza.  Santosh Kumar’s first wife, Jameela, was an highly educated, gorgeous, enlightened and a realistic lady and both Sabiha and Jameela lost no time to nurture close relationship which continues to this day. In reality, he had been impatiently waiting for his appointment in the government service, when a friend encouraged him to try his luck in films. In fact, Santosh looked like a typical prince of a romantic movie. He possessed all the qualities required of a film hero: Superb facial cuts, ,more than average height, authority on Urdu and English vocabulary, quick wit, ingenious with God-gifted wisdom and praise-worthy etiquette. ‘Ahensa’ was the first film of Santosh as a hero, which was released in 1948, under the banner of Kashmir films. After independence, Santosh migrated to Lahore, Pakistan, along with his family. ‘Beli’ was his first film as a hero, which was picturised and released in Pakistan (‘Beli’: 1949, screen writer: Sa’adat Hasan Munto, director: Masood Pervez, who also assisted W.Z. Ahmed as his special advisor, composer: Rasheed Attray, lead actress: Shaheena, daughter of renowned composer-actor Rafiq Ghaznavi, also included were M.Ismail, Shahnawaz, Anwar Adha and Sabiha Khanum (‘Beli’ was Sabiha’s debut film). In 1948, he also appeared as a side hero in his second movie, ‘Meri Kahani’ which was released in 1949 at Nishat cinema, Karachi. Munawwar Sultana and Surender played the lead roles. In 1949, director Anwar Kamal Pasha, son of Hakeem Ahmed Shuja Pasha, established his film studio, ‘Naubahar films’ and started the location shooting of the film ‘Dou Aansoo’, which was based on a novel, ‘Baap ka gunah’, penned by his father.
‘Dou Aansoo’ was released in April 1950, in Jubilee cinema, Karachi, and it was also the first silver jubilee film of Pakistan. (Director: Anwar Kamal Pasha, assistant director: Murtaza Jeelani, who also co-ordinated with director Nazeer in his movie, ‘Sacchai’ in which Santosh performed the role of ‘Aslam’ opposite two lead actresses, Sabiha and Gulshan Ara. Other performers were Shamim Banu, Himaliya Wala, Shahnawaz, Ajmal, Fazal Shah, Azad, Alauddin, Ghazala and a new comer, comedian , Asif Jah. ‘Dou Aansoo’ not only gave a vintage quality to the performance of the entire film crew, but also proved to be a milestone in each and every participant’s career. [2] partition Mega hit movies of Santosh brought more name, fame and money for him, as he labored his way up. His ascendency to stardom paved the way through movies like: Essentially, Santosh was a principle, articulate and a sober person with his eyes always on the future. In addition, he always kept himself abreast of the situation around him. One commercially successful movie after another kept its grip on his imagination and he worked relentlessly to pursue realistic goals. He died on 11 June 1982 at the age of 56. He did 85 films in the span of 35 years in the Pakistan Film Industry with the filim Deewane Do(1985) as being his last one which was released after his death. The film starred Babra Sharif opposite Nadeem Sahab, who carried on the legacy of Santosh Kumar as an actor.

[6] films
Santosh Kumar’s contribution to the Pakistan Film Industry is an immense one. Today, Santosh Kumar is no longer with us, but his significant moral character, wisdom and humility ignited a fire in the countless cine-goers that never did go out and never will.