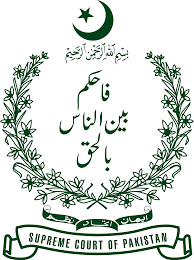 The Supreme Court of  Pakistan  ( Adalat-e-Uzma Pakistan) is a highest and an apex court in the judicial hierarchy of Pakistan[1] Constitution - PakistanEstablished in accordance to the Part VII of the Constitution of  Pakistan , it has ultimate and extensive appellate, original, and advisory jurisdictions on all courts (including the high courts, district, special and Shariat court), involving issues of federal laws and may act on the verdicts rendered on the cases in context in which it enjoys jurisdiction. In the court system of Pakistan, the Supreme Court is the final arbiter of legal and constitutional dispute as well as final interpreter of constitutional law.[2] supremecourt - gov.pk In its modern composition, the Supreme Court is incorporated of Chief Justice of  Pakistan , fifteen justices and two ad-hoc who are confirmed to their appointment by the President upon their nominations from the Prime Minister's selection based on their merited qualifications. Once appointed justices are expected to completed a designated term and then retire, unless their term is terminated through resignation or impeachment by the Supreme Judicial Council resulted in a presidential reference in regards to the misconduct of judge(s). In their discourse judgement, the justices are often categorized as having the conservative, textual, moderate, and liberal philosophies of law in their judicial interpretation of law and judgements. 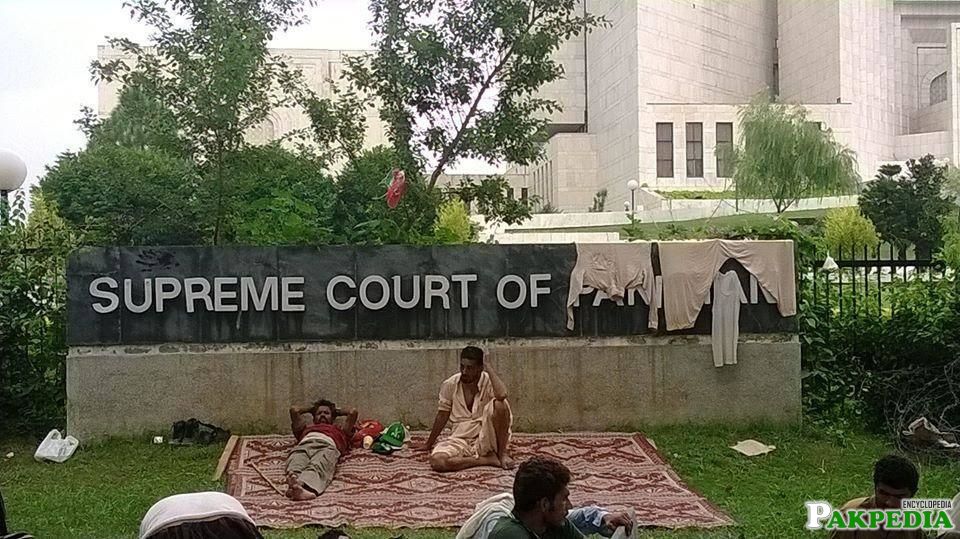 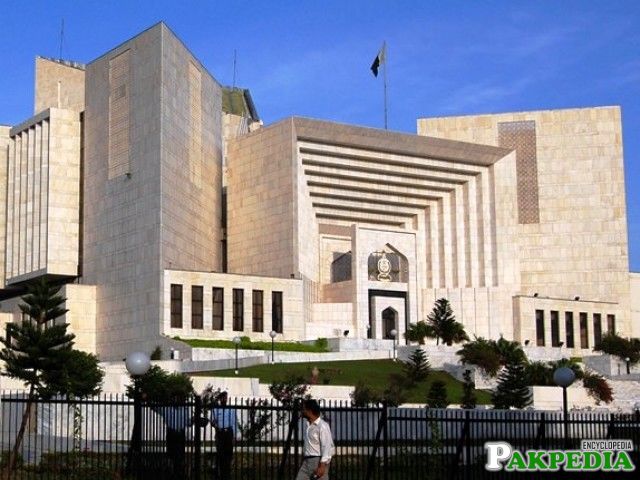 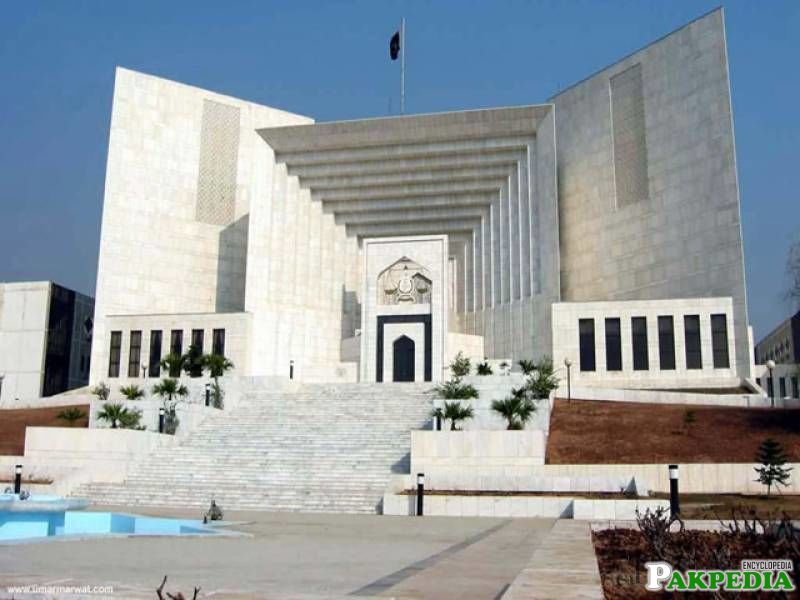 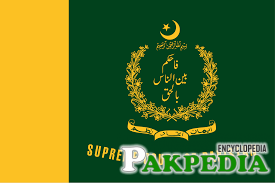 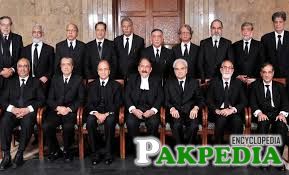 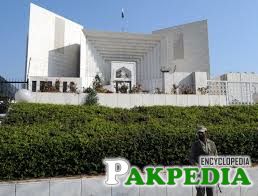 In 1861, the British government in India enacted the Indian High Courts Act that created the high courts in all over the Indian subcontinent in various provinces while abolishing the supreme courts Calcutta, Bombay, Madras,  Lahore , and also the Panchayati system in autonomous presidencies.:[3] Ahmedabad - Allied Until the enactment of the Government of India Act in 1935 that created the Federal Court, these new high courts had the distinctionary powers of being the highest Courts for all cases.:235 The Federal Court had wide range of jurisdictions to resolve disputes between the provinces, presidencies, and the British government of India, often hearing appeals against judgements of the High Courts.While the tradition of British law culture continues to remain an integral part of the Judicature, the modern existence of the Supreme Court of  Pakistan  came when the first set of the Constitution of Pakistan was promulgated on 23 March 1956.:101:2426 The ratification of the Constitution of Pakistan reestablished the Supreme Court in 1956, replacing the name "Federal Court" to "Supreme Court", initially had its seat in  Karachi  where the Sindh High Court exists now. In successive years, the Supreme Court was moved to Lahore High Court until the Supreme Court was permanently moved into its new building constructed in Islamabad in 1964.[4] supremecourt - gov.pk 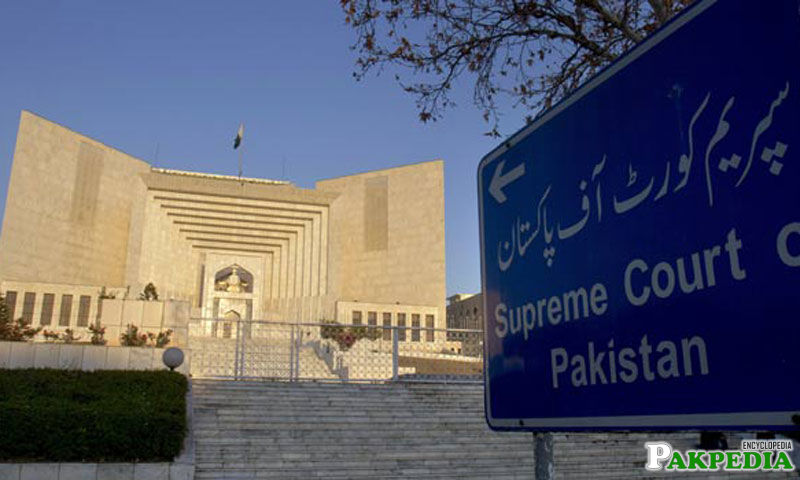 The Part VII of the Constitution of Pakistan reconstituted the composition of Supreme Court and the high courts but it does not specify the number of justices to be served in the Supreme Court[5] Constitution - Pakistan Qualifications to be served as a supreme court justice are strictly imposed that are based on merit, personal intellecutualism, and as a judge in the high courts.In 1947, the Supreme Court consisted of a Chief Justice and six senior judges from  Sindh ,  Punjab , NWFP,  Balochistan , and East Bengal.:94 95 Over the several successive years, the work of the Court increased and cases began to accumulate, leading the Supreme Court requesting the Parliament to increase the number of judges.[6] Court Pakistan - Press As the number of the justices has increased, they sit in smaller benches of two or three (referred to as a division bench ), however, coming together in larger benches of five or more (referred to as a constitution bench) when required to settle fundamental questions of law. 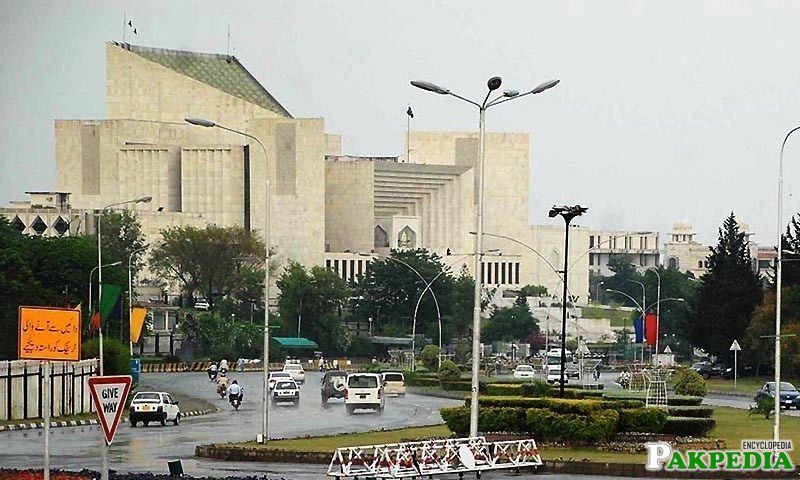 Part VII, Chapter 2 of the Constitution (articles 176 through 191) deals with the powers, composition, rules, and responsibilities of the Supreme Court. These articles concern: 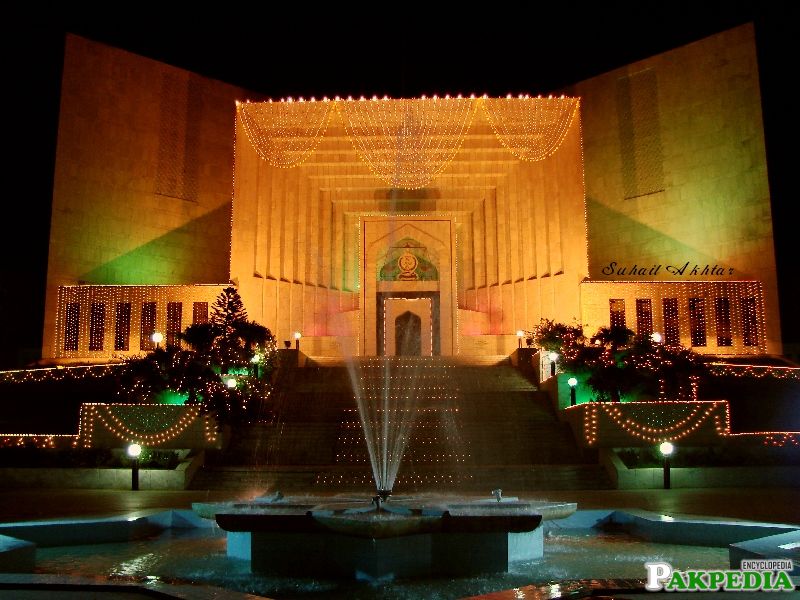 The Supreme Court has the explicit de jure powers and enjoys the powerful judicial independence to block the exercise of certain Prime Minister's executive powers or Parliament's legislative powers that repugnant to Constitution.[7] make laws - repugnant The Supreme Court has maintained its institutional integrity and has been able to maintain its authority to some degree in the face of martial law in  Pakistan  in last decades.Every citizen, not being in the service of (State of)  Pakistan , shall have the right to form or be a member of a political party, subject to any reasonable restrictions imposed by law in the interest of the sovereignty or integrity of Pakistan and such law shall provide that where the Government declare that any political party has been formed or is operating in a manner prejudicial to the sovereignty or integrity of Pakistan, the Federal Government shall, within fifteen days of such declaration, refer the matter to the Supreme Court whose decision on such reference shall be final.The Constitution also allows the Supreme Court to exercise powers and take sua sponte actions against the person, regardless of its statue, or the authority, of being disobedient to or disrespectful towards the Supreme Court, its justices, and its officers in the form of behavior that opposes or defies the Supreme Court's institutional integrity and popular authority.[8] Constitution - Pakistan 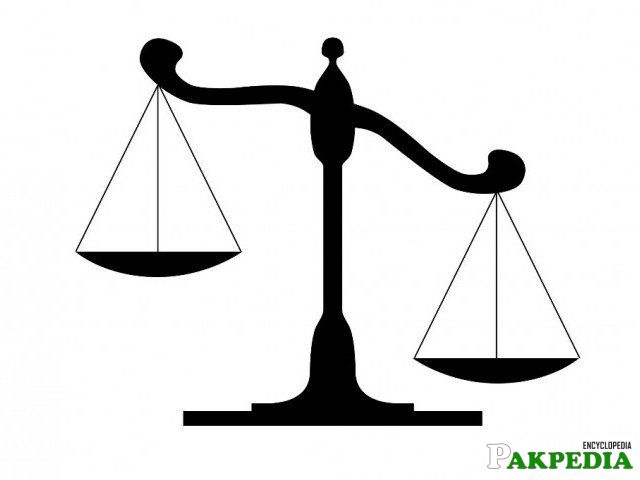 In practice awarded by Constitution, judges of the supreme court have been selected so far, mostly from amongst judges of the high courts. The Constitution allows the judges to be appointed at the Supreme Court regardless of colour, race, and religious sect. Justices A.S.M. Akram, Fazal Akbar, Amin Ahmed, Abdus Sattar, and Hamoodur Rahman (Chief Justice) were the Bengali/Bihari jurists who served as senior justices in the Supreme Court. In 1960, Justice Alvin Robert Cornelius became the first Christian to be served as Chief Justice.In 1970s1980s, Justice Dorab Patel was the first Zorastrian, followed by Justice Rustom Sidwa who served as Supreme Court justice from 1989 until 1993.:226 227[9] Zoroastrian - Diaspora Justice Rana Bhagwandas was the first Hindu jurist who has distinction being the Chief Justice of Pakistan in 2007.

The jurists/judges do not represent or receive the official political endorseman acceptable professional practice in the executive branch of the government.:199200 ents from the nation's political parties which is As their American counterparts in the U.S. Supreme Court, the Jurists philosophical leanings in the Supreme Court are often categorized as conservative, moderate, liberal, and textualist that reflected in their judicial interpretation of the judgements in the impending cases of importance.In 1947, Governor-General Muhammad Ali Jinnah confirmed the nomination of Justice Sir Abdul Rashid, at the behest of Prime Minister Liaquat Ali-Khan, was said to be a national conservative leanings in his judgement.:6065 His successor, Chief Justice Muh'd Munir, was a liberal in his jurisprudence but sided with conservative judgement when validated dissolution of the first Constituent Assembly in 1954 and the National Assembly in 1958 in the light of doctrine of necessity.:67 Under the Chief Justice Muh'd Shahabuddin, the Supreme Court had the conservative leanings in regards to the constitutionalism and their judgements in the cases of important issues.:67 68 Chief Justice Shahabuddin plays a crucial role in drafting the second set of the Constitution of Pakistan which incorporated the liberal ideas with the important Islamic provisions.:[10] Testament - liberal.

Membership of the Court

Chief Justice of Pakistan and justices

As of current formation, Hon'ble Justice Saqib Nisar is currently tenuring as the Chief Justice of  Pakistan , having being appointed on 31 December 2016. The Supreme Court is currently composed of the following Justices (in order of seniority), that included the seventeen regular judges including the Chief Justice and two ad-hoc judges who were reappointed again after their retirement.[11] tribune.com - pkThe ad-hoc appointments are due to fill the Shariat Appellate Bench that is composed on legal scholars that has expertised on Islamic jurisprudence since its establishment in 1980. The ad-hoc appointments for this bench are drawn either from the Federal Shariat Court or from among the Clergy. Decisions made the Federal Shariat Court may be appealed to the Appellate Bench, as the Appellate Bench of Supreme Court is the final authority on Islamic interpretation of law in Pakistan.

The registry of the Supreme Court is its appointed officers who is assisted by registrars, several additional and deputy registrars, gazetted officers, and other law clerks. The registry branches provides speedy justice of all nature of crimes and disputes to the people living in remote areas in the country, while keeping the civil registry of the people.The Officers and Registrars are appointed by the supreme court with the approval from the Chief Justices of High Courts and the President and may make rules providing for the appointment by for their terms and conditions of employment that is granted by the Constitution.[12] Article 208 - Chapte

The Supreme Court has an extensive competitive program for the appointment of the law clerks and research associates at the Supreme Court Library. The Supreme Court hires the law clerks based on the recommendations provided by their professors from their respected universities and colleges. Law clerks reviews the petitions for writ of certiorari, research them, prepare bench memorandums, and draft opinions, and reported back to the supreme court's administrative registrar. As of current, the supreme court has 10 law clerks for the 2016-17 year.[13] press, Law - clerks The Pakistan Bar Council provides qualification for senior advocates, barristers, lawyers, and selected civil court judges to be elevated as Advocate Supreme Court (ASC) based on individual experience, qualifications, and selected invitations.

On 15 March 2009 a two-year-old lawyers' movement working for restoration of the judiciary as it existed prior to the state of emergency called for a long march and a sit-in in Islamabad. Before the procession could reach Islamabad, the Prime Minister Yousuf Raza Gilani appeared on national television and announced unconditional restoration of the judiciary. On 17 March 2009 the formal official notification for restoration of the judiciary was issued. As the result of the notification, all judges who had not retired due to age limit and had not re-taken oath were restored back. Justice Javaid Iqbal, Justice Ijaz Ahmed, Justice Khalil-ur-Rehman Ramday and Justice Raja Fayyaz Ahmed were restored to their position as of 2 November 2007 with immediate effect. Justice Iftikhar Mohammad Chaudhry was notified to re-assume his office on 22 March 2009. Justice Rana Bhagwandas and Justice Falak Sher had since retired.

General Ashfaq P. Kayani, the Chief of Army Staff, also had an important role by silently intervening and encouraging a rapprochement between the government and the opposition. Neither side acknowledged this role, however, until lawyers' movement leader Aitezaz Ahsan publicly admitted Kayani's role. There were rumours that protestors and law enforcement would have violently collided otherwise had he not intervened.

Independence of the judiciary

The restoration of the judges resulted from immense public pressure and led the judiciary to begin a quest for independence. The goal was to ensure a strong and efficient judicial system that could quickly deliver justice to the public. The Supreme Court took notice of several important constitutional and other matters in this period that related to the public interest. These matters included the constitutional petition on PCO judges to declare the 3 November 2007 actions null and void and the constitutional petition on the national reconciliation ordinance (NRO) to declare it null and void. The Supreme Court has also been vigilant on corruption cases related to the current ruling elite, acting in cases such as the Hajj scam, rental power projects, steel mills of Pakistan, and National Insurance Corporation Limited (NICL). This judicial activism and the slowing of government productivity without corruption has created a tension between the judiciary and other government branches.[14] Transnational - Law
Disclaimer: As an encyclopedia, pakpedia.pk's articles contains shared information which has collected from different sources and people. We welcome everyone for corrections and updates, Thank you.