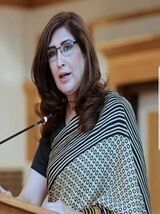 Shehla Raza is a senior politician from Sindh. She is associated with the Pakistan People’s Party for a long time. In her political career, she has served as the Deputy Speaker of the Provincial Assembly of Sindh from 2008 to 2018. She inspires women to join politics and serve the country. Despite having problems due to her struggle for democracy and being a woman politician in a patriarchal society, she has stood adamantly in the face of every kind of problem. The tragedies in her personal life have given her more strength. This article has all the information about Shehla, including Shehla Raza Biography. Shehla is one of the most loyal politicians of Pakistan People’s Party. As she has proved herself faithful and committed, she was in the close circle of late Benazir Bhutto. She always found leading the protest and political activities. Because of her active role in politics from her university life, she jailed to pressurize her so she would not participate in political activities when the student politics was banned. Inspire from the political career of Zulfiqar Ali Bhutto, Shehla always takes a stand in front of the military dictators. Currently, she serves as the provincial minister of Sindh for Women Development

She completed her metric from Government High School, Hyderabad. Later she joined the University of Karachi and did her graduation and post-graduation in Physiology. In the university, she also started her political career with the People’s Students Federation.

Shehla is the wife of Ghulam Qadir, who was a general manager of a well known Pharmaceutical company. They tied the knot in 1992. The couple had a son and a daughter who died in 2005 in a road accident.

The political career of Shehla started in 1986 when she joined the People’s Student Federation. It is the student wing of the Pakistan People’s Party. Her political career started at a time of the military regime of Zia Ul Haq. The political activities for the students banned at that time, but she continued her struggle. After three years of her political struggle, she became the Joint Secretary of People’s Student Federation. Like most of the political leaders who stood against the military regime, Shehla also faced hardships and difficulties.

She was jailed in some politically driven cases in 1990. It was after the Islamic Democratic Alliance formed the government. She was jailed purely due to her political activities but accused of murder and possession of illegal arms. As the charges are politically driven, they later dropped. Her political struggle continued without any fear of the opponents. In 2005, she became the General Secretary of women’s wings of people’s party, Karachi division. The top leadership was already in self-exile, and the responsibility of reorganizing the party was mainly on her shoulder.

Shehla first elected as a member of the Provincial Assembly of Sindh in 2008 on reserve seats for women. Her party won the general elections in the center and Sindh. Due to her loyalty to the party, she became the unopposed deputy speaker of the Sindh Assembly. Her first term as a Deputy Speaker of lasted till the expiration of the government.

In 2013, her party lost the government in the center but won the election in Sindh. She was again elected as the Provincial Assembly of Sindh on reserve seats and later, the Deputy Speaker of the Sindh Assembly. Her second term also lasted until the end of the government.

In 2018, she appointed as the Provincial Minister of Sindh for Women Development in the cabinet of Murad Ali Shah.

While she was serving as a deputy speaker, she received a threatening letter in her office through the currier. The letter typed in Urdu demanded 50 million rupees from Shehla. In case of failure, she threatened to face the same fate as Benazir Bhutto. She immediately informed the government but said that she was not afraid of any threat.