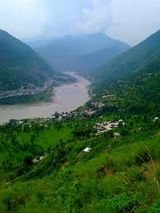 Shandur Top (el. 12,200 feet (3,700 m)) located in Chitral District, Chitral- Gilgit – Baltistan ,  Pakistan . Shandur is often called the ‘Roof of the World’. The top is flat, a plateau and can be crossed between late April and early November. The grade is very gradual, and the area is crossed by plentiful small streams during summer. The boundary line between Ghizer District and Chitral District is also situated in Shandur Top in Punji-Lasht as per the international boundary law division by watershed initially demarcated by Lt. Col AG Durand( also known as Durand boundary line).[1] travel pk – org Every year there is a polo match played on Shandur Top between the teams of Chitral District and Ghizer District.Shandur Pass is one of the major mountain passes of Chitral-Gilgit- Baltistan. . In 1935 UK Administrator for Gilgit-Baltistan E. H. Cobb ordered Niat Qabool Hayat Kakakhel nambardar of Ghizer to make a huge polo ground in Shandur. The polo ground was named “Mas Junali”, because in the Khowar language ‘mas’ is the word for ‘moon’ and ‘junali’ is the word for ‘pologround’, and Cobb was fond of playing polo in the moonlight.[2] shandur.chitral – studio Cobb was impressed by Kakakhail’s resourcefulness and efficiency and wished to reward him for his service, but Kakakhail refused to accept any reward for his work. Instead, for the common benefit, Kakakhail asked Cobb to bring trout to stock the local streams. Cobb ordered live trout from England and dropped them into the River Ghizer.[3] Gilgit – introduced Due to this little service, Directorate of Fisheries had been established and hundreds of people got employed. Now the weight of those fishes in Hundarap Lake cross 24 kg and in Baha Lake Khukush Nallah, their weight crossed 40 kg.So Mas Junali became a source of relation between the people of Chitral District and Ghizer District. The Shandur Polo Festival opens a door step to the people of the world to enjoy their selves. Many of the people from entire world come here to watch polo match played between Chitral and Ghizer.At first it was a training game for cavalry units for the King’s Guards or other Elite troops. To the warlike tribesmen who played polo with as many as 100 players to a side, it was a miniature battle. It became a Persian national game in the 6th century AD. From Persia, the game spread to Arabia, then to Tibet, China and Japan. In China, in the year 910, death of a favourite relative in a game prompted Emperor Apaochi to order beheading of all players. Ali Sher Khan Anchan Maqpoun used to play Polo at Shandoor when Chitral was part of Maqpoun empire.  Historically, polo being the king of games was played between small kingdoms, villages and rival groups of Gilgit Agency. From 1936 onwards polo tournaments were held annually at Shandur at the patronage of the British. The three-day Shandur Polo Festival has developed steadily in recent years into the massive celebration of mountain polo that it is today. Shandur invites visitors to experience a traditional polo tournament which since 1936 has been held annually[4] ISBN 1-86966-135-4 in the first week of July between the local teams of Gilgit and Chitral. The tournament is held on Shandur Top, the highest polo ground in the world at 3,700 meters (the pass itself is at 3,800 meters). The festival also includes Folk music, dancing and a camping village is set up. The polo tournament is featured in the first episode of Himalaya with Michael Palin.Free-styled mountain polo is arguably polo in its purest form. This version of the game played at Shandur-Top has attained legendary status and is of great interest to international and domestic adventure tourists alike. There are no umpires and there are no holds barred. The rules are: There are no rules! In “The Roof of the World” Amin/Willets/Tetley write: “by comparison, an American Wild West rodeo might pass for choir practice.In order to decide the final teams to play at the Shandur Polo Festival preliminary matches are played both in Chitral and Gilgit, in which the best horses and players are chosen for the final games by the local juries. The festival begins on the 7th of July . During the course of the tournament A, B, C and D teams of Gilgit and Chitral battle it out on the polo field. Each team has six members with 2-4 reserve players in case of injury etc. The match duration is usually one hour. It is divided into two halves, with a 10 minutes interval. During intervals the locals enthrall the audiences with traditional and cultural performances. The game decided in favour of the team scoring more goals. The final is held on 9 July.The field measures about 200 meters by 56 meters (normal polo field is about 270m by 150m), with 60 cm high stone walls running the length of the field on both sides instead of boards. As six players make up one side, the field can get fairly crowded. This has the advantage of slightly slowing down the pace, which, all things considered, is probably somewhat safety-enhancing.[5] polo-festival – html