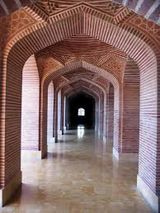 The Shah Jahan Mosque was constructed by the eponymous Emperor as a gift to the people of  Sindh . It is built predominantly of heavy brick and is laid out in the usual quadrilateral arrangement with a large (52 x 30 meter) courtyard at its center. The arcades around the courtyard are covered with 93 domes of varying size. One remarkable acoustical feature is that the prayers of anyone speaking loudly in front of the mihrab (the prayer niche facing Mecca) can be heard clearly throughout the building.It was not until 1658-59 that the eastern portion of the building and the gateway were completed. Later repairs were undertaken under Emperor Alamgir in 1692 and in 1812 under the auspices of a local chieftain, Murad Ali Khan Talpur. Further renovations took place in 1855 and in 1894 during the British period. More recently, the mosque was restored during the 1960s and 70s.The mosque has been on the UNESCO tentative World Heritage list since 1993 but has not yet achieved official recognition.[1] 1658-59 that the eastern portion of – the building The Shah Jahan Mosque was built in the reign of Mughal emperor Shah Jahan. It is located in Thatta, Sindh province, Pakistan. It has been on the tentative UNESCO World Heritage list since 1993.  In the town of Thatta (100 km / 60 miles from Karachi) itself, there is famous Shahjahani Mosque with its beautiful architecture. This mosque was built in 1647 during the reign of Mughal King Shah Jahan, also known as the builder King. The mosque is built with red bricks with blue coloured glaze tiles probably imported from another Sindh’s town of Hala. The mosque has overall 93 domes and it is world’s largest mosque having such number of domes. It has been built keeping acoustics in mind. A person speaking inside one end of the dome can be heard at the other end when the speech exceeds 100 decibels.[2] Located –  Located Thatta (Thatto in local language) is a historical and important city of the  Sindh  Province of Pakistan. The city lies some 100 kilometers east of the Karachi metropolis on the National Highway. With River Indus and the Arabian Sea coast to its west, Thatta was once an important and thriving city and a centre of the then newly thriving religion of Islam. From the 14th century four Muslim dynasties ruled Sind from Thatta, but in 1739 the capital was moved elsewhere and with it Thatta declined. Thatta has a very rich heritage of Muslim architecture during the era of the 16th and 17th century. Although Thatta is known for its history which dates back to some 2000 years, it is also known for the Shah Jahan Mosque – a masterpiece of Mughal construction. This mosque was built by Mir Abdullah on the orders of Mogul emperor Shah Jahan in 1647 A.D. It is said that Shah Jahan built this mosque as a gesture of gratitude to the people of Thatta for sheltering him during his youth after his father, Emperor Jahangir banished him from Delhi.[3] Shah Jahan Mosque – a   Mughal construction

Architecturally unique, Shah Jehan mosque is the first mosque in this region to be constructed according to the principals of Mughal courtyard architecture. As per some Persian inscriptions, the foundation of the mosque were laid in 1644 and mosque was completed in 1647. The floor was paved with stone in 1657.The mosque is a superb example of crafty tile work. Its 93 domes and 33 arches with varying sizes add to their architectural beauty. The domes have been exquisitely laid in a mosaic of radiating blue and white tiles. Its blue tiles and mosaic work are alluring. Red brick is utilized rather than the more commonly seen pink sandstone and marble associated with Mughal buildings.[4] Constructed accordin principal –   Mughal architecture

The main entrance of the mosque has a central domed chamber. The mosque has an open central courtyard of about 15,900 square feet. Arcades of red brick arches highlighted with bands of white surround the courtyard. The main entrance is in the eastern portion and the secondary entrances are contained in the north and south portion. The prayer hall has three bays on either side of the central meh-rab chamber. Each bay is covered by a low dome, which adds up to 93 domes. The proportion of the aisle to the low domes enables an acoustic range that in effect allows the prayers read in front of the mihrab to be heard in all parts of the mosque. The mosque is spread over an area of 51,850 square feet.[5] The mosque  open central courtyard – about 15,900

The Best feature of this Shah Jahan Mosque is its unique dome designs that the sound circulates all over the mosque without loudspeakers. The air circulation system is also appreciable and environment of it remains calm all the time. More than 20,000 peoples can offer the prayers in this mosque at a single time. Water pound and the garden are present in the front side of it which enhances the attraction.[6] Best feature Mosque

It is said that King Shah Jahan once dreamed about this Mosque and get the orders from the Allah Almighty to build a Mosque. He completed this beautiful Shahjahani Mosque in a very limited period of time. When Sher Shah Suri defeated the King then Shahjahan spent few of his time in this Mosque for it completion. Shahjahan completed this Mosque under the supervision of Mir Abdullah. Mir Abdullah was one of the great architects at that time and built so many marvelous buildings. He mixed red bricks and Blue glazed tiles in the finishing of Shahjahani Mosque. Dabgir Mosque is also very famous along the Shah Jahan Mosque.[7] Dream of King Shah Jahan

Royal King Shah Jahan spent around 9 lacs Shahjahani Rupees at that time. The foundations of Shahjahani Mosque are 12 feet to 15 feet deep in the soils and include the mountain’s hard stone. There are 5 small and big doors in it along the 100 domes and 94 pillars.[8] Expenses –  Expenses