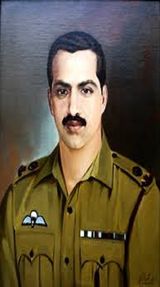 Shabbir Sharif Shaheed was commissioned in Pakistan army on 19 April 1964 .He is the only person ever who received both the Nishan-e-Haider and Sitara-e-Jurat for his bravery. In addition, he is also a recipient of Sword of Honour and holds a unique honor of having received the three most coveted awards of Pakistan Army. He was born on 28 April 1943 in a Rajput family [2] Legnds Maj Shabir Sharif at Kunjah, Gujrat District to Major Rana Muhammad Sharif.Sharif Completed his Matric from St. Anthony’s High School, Lahore and while he was at Government College Lahore that he received a call to join Pakistan Military Academy (PMA) Kakul.
He used to play squash and won Army level swimming medal while he was in 4th Frontier Force Regiment.

He was commissioned in Pakistan Army on 19 April and after successfully completing his training, after which he was awarded the Sword of Honor, he was posted to the 6th Battalion of the Frontier Force Regiment.

In the Indo-Pakistani War of 1971, the Pakistan Army launched an offensive on the Western front against the enemy. Shabbir, as commander of a company of 6 Frontier Force Regiment, was ordered to capture high ground overlooking Grumukhi Khera and Beri, a village in the Sulemanki Sector.

On 3 December 1971, in a well-organised action, he fought valiantly alongside his men and held Indian attacks at bay. He cleared the Jhangar post with utmost courage by fearlessly passing through the minefield laid by enemy and swimming across a water obstacle, the ‘Sabuna distributary’,whilst under intense enemy fire and led his company to capture the objective. During the day, his troops repelled over 15 Indian attempts to recapture the high ground and furthermore, he and his men destroyed four enemy tanks and held two Indian battalions at bay by killing 43 soldiers.
During an attack on the night of 5 December, Shabbir jumped out of his trench on the call of an Indian Company Commander who dared him for a hand-to-hand combat. Shabbir soon snatched the sten gun out of the Indian major’s hand and mortally wounded him. The gallant act demoralized the Indian troops allowing Shabbir’s men to consolidate their hard earned gains in the captured area.[3] Major SHabbir Sharif ,Army`s Superman  [4] Braving Of Major Shabbir Sharif
On the afternoon of 6 Dec, the enemy launched another counter attack preceded by air strikes and heavy artillery shelling. After casualties amongst the crew, Shabbir Sharif took over as a gunner on an anti-tank gun and started firing on the enemy tanks. While this fight was on, one of the enemy tanks fired at him causing fatal injuries which resulted in his death at the age of 28. His last words were quoted as: “Don’t lose the bridge.” It was the same bridge he died defending from the enemy’s attack.

LAHORE: Homage was paid to Major Shabbir Sharif, a valiant warrior who displayed unparallel courage while defending the motherland and embraced Shahadat on December 6 at Sulemanki Sector during the 1971 War.

He earned the highest gallantry award of Nishan-e-Haider. 29th PMA Long Course (18 April 1964): BSUO Shabir Sharif. Commissioned in 6 FF Regt.
Alma Mater: Govt College Lahore.[5] Award of Sword of Honour
He embraced Shahadat on 06 Dec 1971 at Sulemanki Sector, in 1971 War.
He was awarded  Nishan-e-Haider posthumously. He was also awarded SJ during 1965 War.
His brother Gen Raheel Sharif is current COAS.
He was a Maj when he embraced Shahadat in 1971.

The hospital has been established by the Punjab government on the recommendation of the army chief. It has been upgraded to the THQ hospital level with 60 beds at a cost of Rs360 million.[6]Shabbir Sharif hospital

His younger brother, General Raheel Sharif, became Chief of Army Staff, the highest rank in the Pakistan Army, in November 2013. He is also the relative of another Nishan-e-Haider holder Raja Aziz Bhatti.