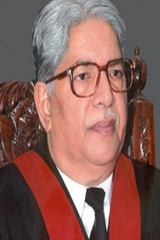 Justice Sayed Zahid Hussain was nominated as judge of the Lahore High Court on 21 May 1998 and was confirmed on 19  May 1999. Sayed Zahid Hussain had also been remained a company judge at the LHC, member committee for revision of High Court, member election tribunal, member LHC administration committee, chairman enrolment committee of the Punjab Bar Council and member of the Committee for Recruitment of additional District and Sessions Judges. He belonged to Narowal district and started legal practice as a lawyer in 1972. He had been an associate of SM Zafar. Justice Zahid was the 37th chief justice of the LHC since its inception in 1866. Justice Zahid retired on December 14, 2011, at the age of 62. Before imposition of emergency rule and PCO, Justice Khawaja Muhammad Sharif was the senior most judge of the LHC and was eligible to be appointed as the chief justice, but Justice Zahid Hussain became the senior most judges after Justice Sharif refused to take oath under the PCO. [1] Biography

Justice Sayed Zahid Hussain hails from Chak Qazian District Sialkot/Narowal where he was born on 15-12-1949. He belongs to a respected Sayed family, his forefathers held the august positions of Qazi/Qazi-ul-Qazat in the Mughal era. He rendered numerous important judgements in Civil, Service, Commercial and Constitutional matters and brings with him vast experience in the field of law. [2]  Family Background

Sayed Zahid Hussain handled and conducted important cases of Civil, Service, Commercial and Constitutional nature as a practicising Advocate before all the High Courts of the Country, the Supreme Court of Pakistan and Supreme Court of Azad Jammu and Kashmir.[4]  Cases

He served as Member, Syndicate Punjab University; Lahore, University of Engineering and Technology, Lahore and Member Board Lahore University of Management Sciences (LUMS).[6] Served As

Justice Sayed Zahid Hussain was appointed Chief Justice Lahore High Court with effect from 1-1-2008, which position he held till elevation as judge, Supreme Court of Pakistan on 14-4-2009 and retired from that Court on 01/3/2011. He has been Chairman, Punjab Judicial Academy, Member Board, Federal Judicial Academy, Member Law and Justice Commission of Pakistan, Acting Governor Punjab.[7] Chief Justice