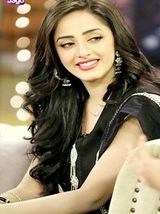 Sanam is a good looking and talented Pakistani actress and a model who started her career in 2013, and today she considered one of the most versatile actresses of the industry). She proved herself with her bewildering performances one after another, which wasn’t a surprise for her fans who welcomed her warmly since her first day in the industry when she didn’t have any experience of acting. She shares a strong association with Pakistani actors Noor Hassan and Wahaj Ali.

She was born on 27th August 1991 in Lahore, where she spent all her life. Currently, she resides in Karachi for her work.

She has a degree Bachelors, which she attained from the University of Central Punjab. Soon after completing her education, she became a part of the Showbiz industry.

She never disclosed her personal information with media though she is a sister of Zeb Chaudhry (a Pakistani actress and a model) who became a significant reason for Sanam to join Showbiz. She stayed in a relationship with Furqan (a Pakistani actor and a model), but unfortunately, they broke up, and furqan got married to Sabreena. In November 2019, she got married to Somee Chohan in a rivate event. Somee is a singer and composer by profession.