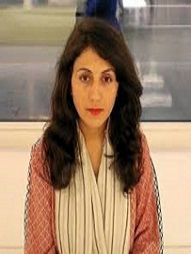 
Samina Baig who became the first Pakistani woman and the third Pakistani to mark her presence at the great Mount Everest (8848 meters above sea level) on May 19, 2013 after legendary Nazir Sabir who was the first Pakistani followed by Hassan Sadpar to climb Mount Everest. Born on 19 September 1990, Samina started her mountaineering career with climbing Chashkin Sar, a 6000 meters peak in Shmishal in 2010. She also climbed Koh-i-Brobar in 2011. While an attempt at the 7000m high Spantik Peak ended in failure due to adverse conditions on the mountain.Samina Baig hails from Shimshal village in Hunza Gojal, Gilgit-Baltistan, Pakistan, and was trained in mountaineering from the age of 15 by her brother Mirza Ali who himself is a mountaineer and a patron to her sister in the field of mountaineering. Her expedition was a demonstration of gender equality, as the philosophy she and her brother follows in their climbing exploits. According to the Pakistan Alpine Club, her brother Mirza Ali was unable to reach the summit as he dropped out in the end due to his illness. Her expedition to the summit took 48 days, the team traversed the South Col passed in eight hours, with the other fellow mountaineers and guiding Sherpas reaching their goal on the sixtieth anniversary of Edmund Hilary and Sherpa Tenzing’s first successful conquest of Everest. Her success has widely been applauded in mountaineering communities and by the people.[1] Samina Baig info 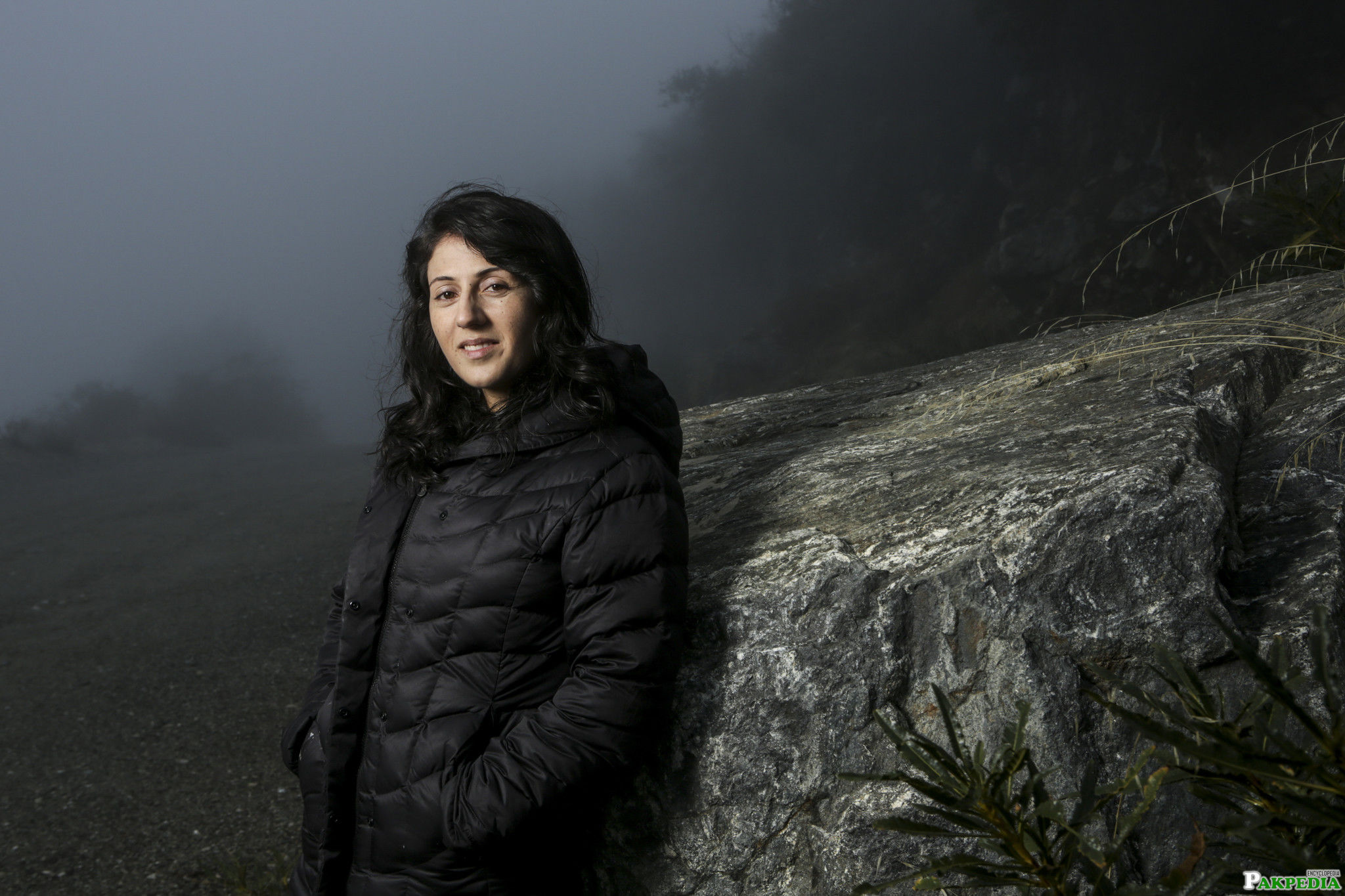 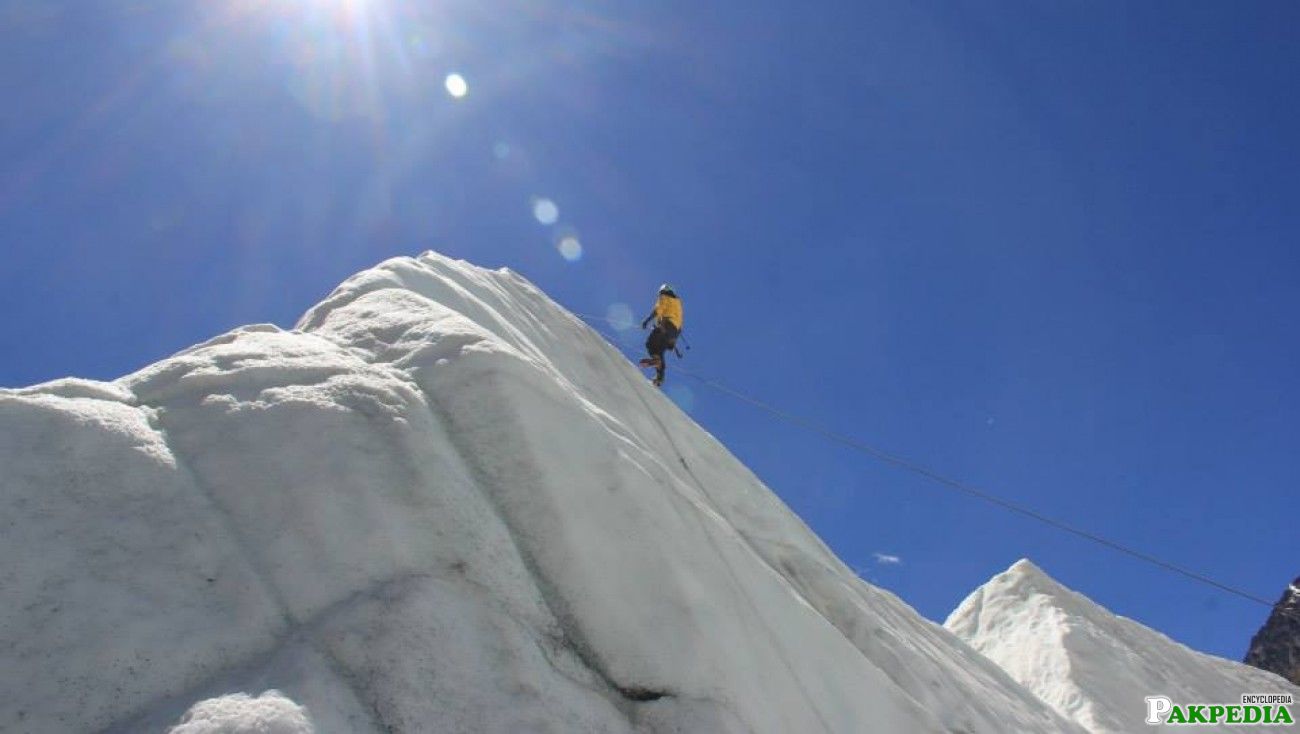 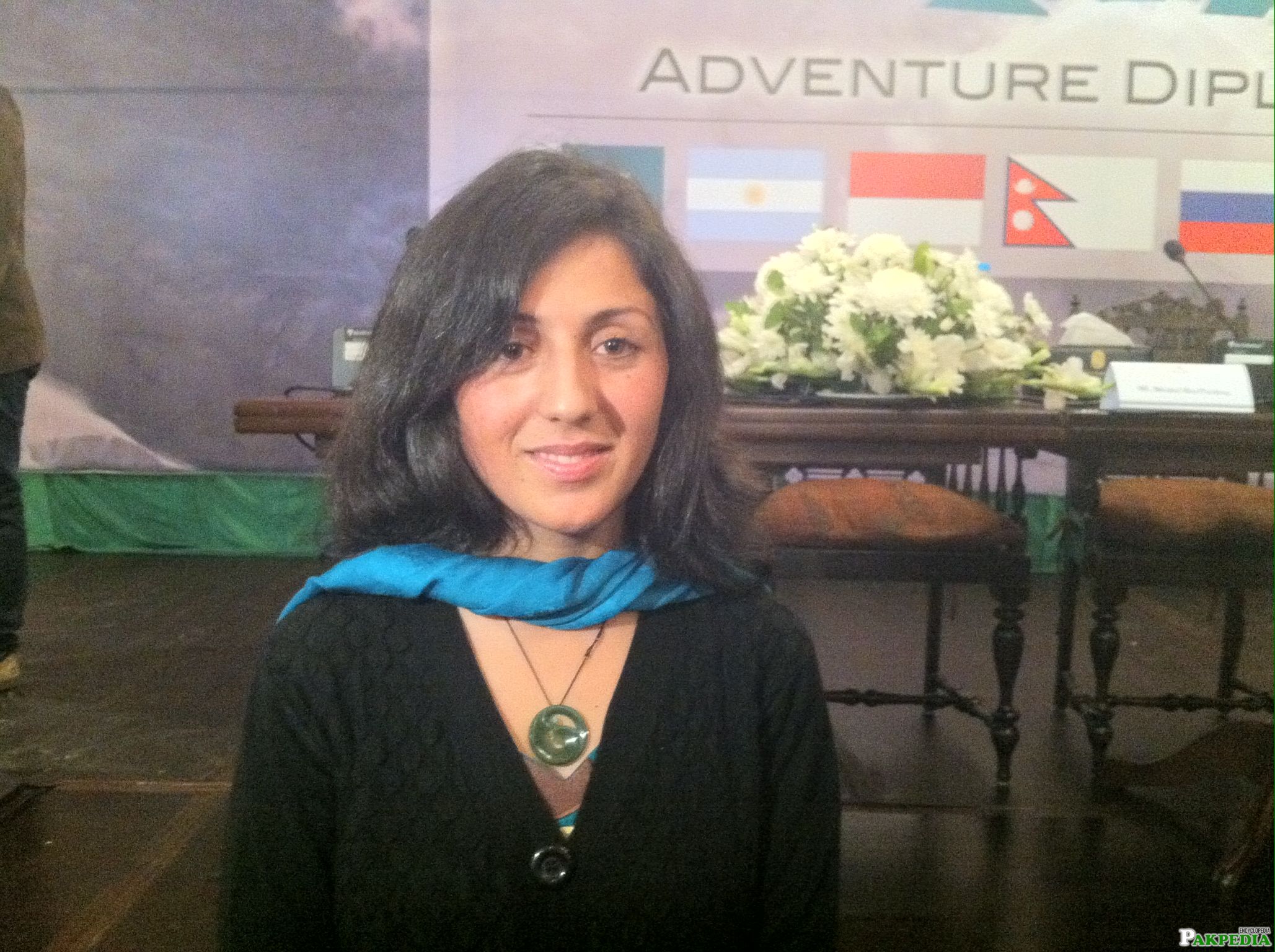 Samina Khayal Baig is the first Pakistani woman and the third Pakistani to climb Mount Everest. She is also the youngest Muslim woman to climb Everest, having done so at the age of 21. Samina is also the first Pakistani woman and the first Muslim to climb the seven summitsShe was the first to climb the peak Chashkin Sar (above 6,000 meters) in Pakistan in 2010, which was later renamed Samina Peak after her. She reached the summit of 'Koh-i-Brobar' ('Mount Equality') in 2011. An attempt at the seven kilometre high Spantik Peak ended in failure for Baig, due to adverse weather conditions. Baig comes from Shimshal village in Hunza Gojal, Gilgit-Baltistan, Pakistan, and was trained in mountaineering from the age of 15 by her brother, Mirza Ali. She is a student of Arts and began climbing when she was merely four years old. Besides the Himalayas, Baig has been employed as a mountain guide and expedition leader in the Hindu Kush and the peaks of Karakoram. Baig has been a professional climber since 2009.[2] Samina Khayal Baig Biography

Baig comes from Shimshal village in Hunza Gojal, Gilgit–Baltistan, Pakistan, and was trained in mountaineering from the age of 15 by her brother, Mirza Ali. She is a student of Arts and began climbing when she was merely four years old. Besides the Himalayas, Baig has been employed as a mountain guide and expedition leader in the Hindu Kush and the peaks of Karakoram. Baig has been a professional climber since 2009.Special Communications Organization (SCO), a telecom operator in Azad Jammu & Kashmir and Gilgit Balitistan has appointed her as its Brand Ambassador. The contract signing ceremony was held at headquarters Special Communications Organization Rawalpindi. Maj Gen Amir Azeem Bajwa and other officials of SCO were present on the occasion. 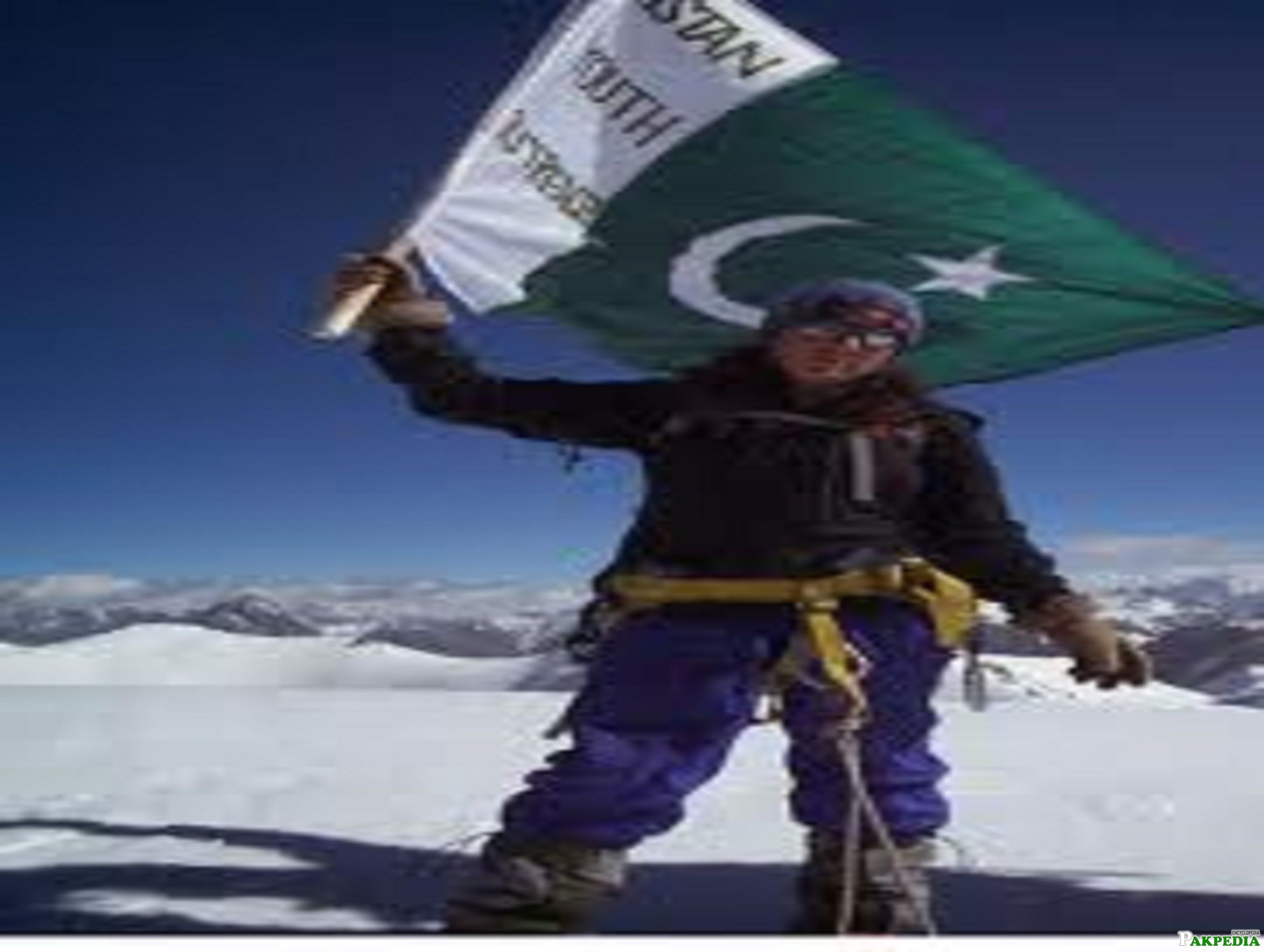 Samina Khayal Baig, a 21 year old mountaineer from the Shimshal, Gojal Valley (upper Hunza) created history today by becoming the only Pakistani woman to climb Mount Everest, the world’s highest peak, according to media reports.She, along with her 29 year old brother Mirza Ali, was part of a team that scaled the highest peak of the world in Nepal on Sunday. According to renowned Indian newspaper, the Hindu, “Nepal Mountaineering Department official confirmed their feat, saying 35 foreigners, accompanied by 29 Nepalese Sherpa guides, reached the peak after climbing all night from the highest camp on South Col — the pass between Mt. Everest and a neighbouring mountain. Ms. Baig (22), a native of Shimshal village deep in the Karakorum range in Upper Hunza, was accompanied by her brother and guide Mirza Ali (29) on the climb. The attempt began as an event to commemorate the first successful expedition to Mt. Everest, on May 29, 1963, by Edmund Hillary and Tenzing Norgay.”Mirza became Pakistan’s youngest male mountaineer to climb Everest. The first man from Pakistan to climb Mount Everest was Nazir Sabir from Hunza Valley while the second was Hassan Sadpara from Skardu, Baltistan.All of the climbers of Pakistan to summit Mount Everest belong to Gilgit-Baltistan.The news of successful summit has charged the people across Pakistan with a new zeal and happiness. The social media and the mainstream media are abuzz with the news of the huge success.In their native village, Shimshal, the local people exchanged greetings and celebrated the success in the traditional way, by thanking the Almighty and rejoicing.A wave of celebrations have erupted in different parts of Gilgit-Baltistan, particularly in Hunza Valley, where people have lauded Samina Baig and Mirza Ali for winning honor for the region and the country.Mirza Ali and his sister Samina Baig were part of an expedition that aimed to promote gender equality in Pakistan and in other parts of the world.[3]Samina Baig becomes the first Pakistani woman to climb the Mount Everest Samina Baig and Mirza Ali were warmly received at the Karachi and Islamabad airports upon their return to Pakistan on 3 June. That evening, they were also honoured by the Ismaili Council for Rawalpindi, Islamabad, Peshawer, Mardan Areas (RIPMA) and the Aga Khan Youth and Sports Board at a special reception held at the Serena Hotel in Islamabad. Young artists performed Shoh Muborakbod, a traditional Wakhi folk song, welcoming the young mountaineers to the dinner hosted in their honour. Firoz Rasul, President of the Aga Khan University was also present and applauded Samina and Mirza for their success. He added that Samina was a source of inspiration for the women and girls of Pakistan. The audience joined in, giving a standing ovation to Khayal Baig, the father of Samina and Mirza, for giving his children the liberty to live their dreams. Most recently, Pakistan's Prime Minister Nawaz Sharif recognised Samina's accomplishment as the first Pakistani woman to scale Everest. During a meeting at his office, the Prime Minister congratulated her on her "landmark" achievement, citing her as an example of the courage of Pakistani women and their ability to face challenges. He said that the sport of mountaineering would be promoted by his government.Reflecting on her accomplishment, Samina wants her achievement to inspire the millions of woman in Pakistan to achieve their dreams: “Women are often underestimated in our society, so my achievement will send out a message to everyone – women are equally capable of achieving great things in life.”Speaking at the occasion, Aitmadi Iqbal Walji, President of the Ismaili Council for Pakistan congratulated Samina Baig for making history by becoming the first Pakistani woman to reach the summit of Mount Everest. He also paid tribute to her parents and siblings for creating opportunities to help Samina, and in particular praised Mirza for training and mentoring his sister in mountaineering. [4]Ismaili Council honours Samina Baig

Samina Baig was the third Pakistani to climb Mount Everest and the only Pakistani woman ever to achieve the feat. The Pakistani mountaineer is these days on the quest to conquer the towering K2 this summer. However, Baig was injured whilst climbing as a rock hit her. [5]  Samina Baig gets hit with a rock during K2 expedition 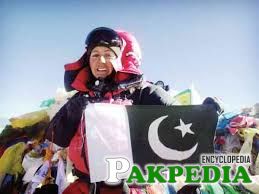 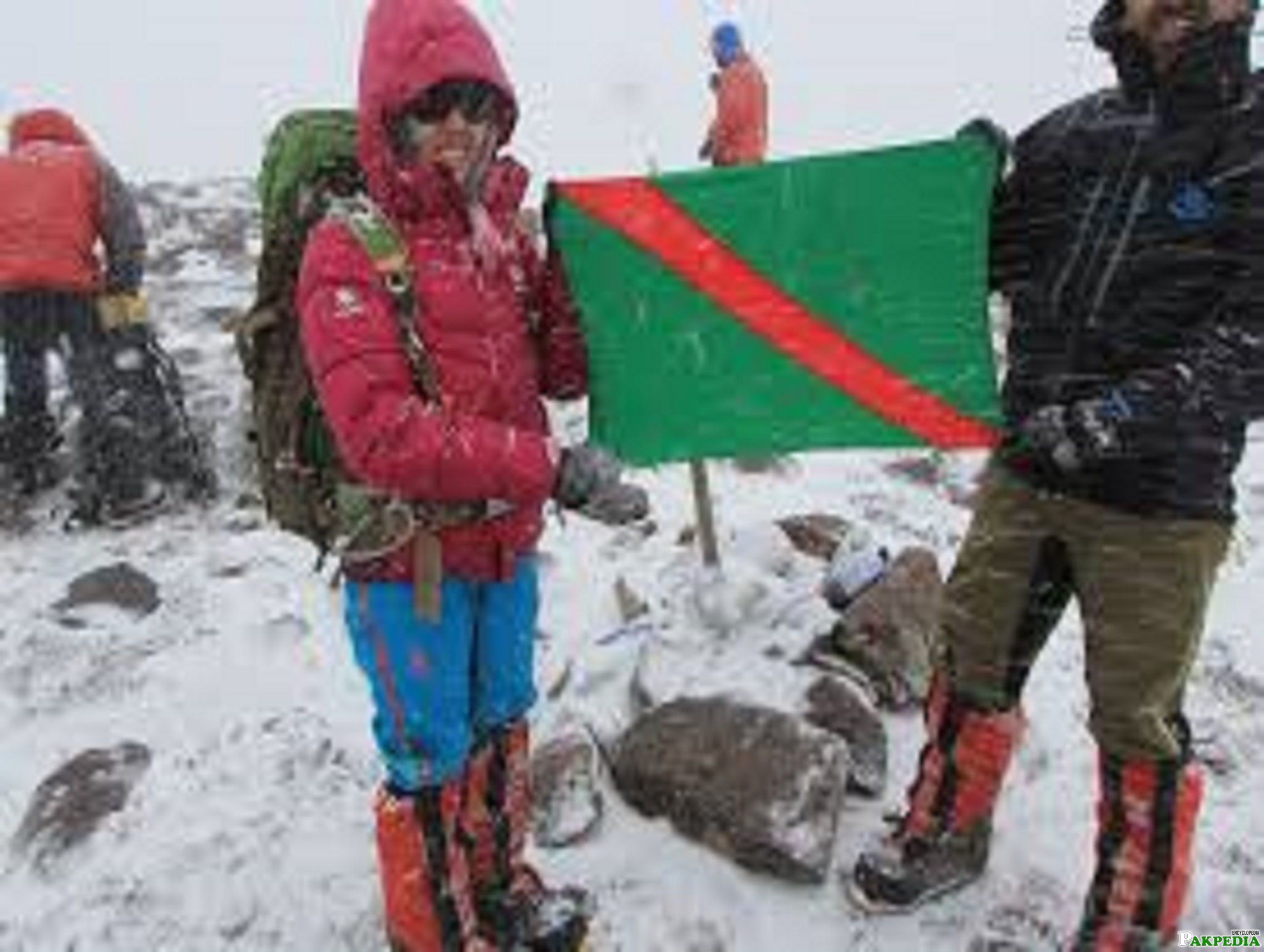 Mountaineer Samina Baig was forced to call of her bid to summit the second highest mountain in the world, K-2, after suffering an injury while climbing, Express News reported.Samina, who was the first Pakistani woman to scale Mount Everest, was climbing up K-2 on a second rotation to acclimatise to conditions at high altitude ahead of a summit attempt. Having climbed to camp-1 on Friday, she complained of severe pain on the left side of her neck, extending to the shoulder, her brother Mirza Ali wrote in a post on Facebook. Instead of subsiding, the pain increased the next morning, but the group decided to push on towards camp-2. Ali said that Samina has complained of the pain in the past as well, with treatment doing little to help.While pushing on from camp-1, Samina continued to complain of pain which prevented her from climbing up. Hence, the group decided to go back down to base camp instead of climbing up to camp-2.Climbing down below camp-1, Ali said that a chunk of ice and rock hit her forearm. “Doctor is not sure if it’s fracture or just bruises but it’s swollen.” The group, however, managed to get back to base camp for doctors to have a better look at the injuries and to treat the arm. [6] Samina Baig to call off K-2 summit bid No mountain is high enough for Samina Baig, who became the first Pakistani woman to climb all seven highest peaks in the seven continents in just under eight months. “We had the greatest honour to hoist our green flag on the seven summits,” said Mirza Ali who accompanied Samina Baig on the seven summits adventure, updating his Facebook page. At 9am, Samina Baig stood at the top of Mt Elbrus, the highest peak in Russia, with her brother, holding the Pakistani flag high for a picture. With this summit, the 23 years old climber completed the challenge of climbing seven of the highest mountains around the world, including Mount Everest which she conquered in May, 2013.Alpine Club of Pakistan (ACP) confirmed the news on Saturday. “We are planning a reception for Samina Baig when she returns this week,” said ACP Executive Council Member Karrar Haidri.The two flew out to Russia, after Alaska, where they pushed to capture the highest mountain in Europe, Mt Elbrus, which is 5,642 metres tall, bringing their ‘Seven Summits’ adventure to an end.[7] first Pakistani woman to conquer seven highest peaks

Mirza Ali Baig is a brave Mountaineer who has made