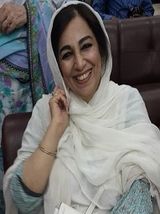 Saloni Bukhari was the one of the tallest leaders of PTI. She was a trusted ally of Imran Khan. She was behind the widespread support that PTI has among women and youths of Pakistan. She was a true fighter and a brave woman. She fought against deadly cancer for long with affecting her duty to the nation. In the end, Cancer did it work and Saloni left this world. In Lahore May 12th 2011 Pakistan Tehreek e Insaf President Punjab Saloni Bokhari held a meeting at her residence where she invited the senior leadership of Lahore. Regional Organizer Lahore Mian Mehmud ur Rasheed and his counterpart Dr Nousheen Hamid Miraj, discussed the party policies and the action plans that will be followed in the coming weeks. The meeting was attended by the women’s wing Deputy Organiser Lahore Shahnaz Perveen, District Organiser Lahore Sadia Sohail, Deputy Organizer Shavana Bashir and Information Secretary Punjab Talath Naqvi,  Deputy Information Secretary Aneela Malik, Vice President Lahore region Zaheer Abbas Khokar and General Secretary Murad Ross. The pressing situation in the country calls for strategies that will lead the nation out of its present dilemma and for the party leadership to work with the people who are feeling betrayed by the ruling elite. All issues pertaining to Lahore region were discussed in detail and it was decided that the women’s wing will work in conjunction with the men to strengthen the party at the grass root level in preparation for the coming election.  [1] Meeting Meeting

On Feb 2011 Pakistan Tehreek-e-Insaf Women Wing led by Punjab President Saloni Bokhari, held a silent sit-in outside the American High Commission to condemn the death of Shumaila, the innocent young bride of Muhammad Faheem who was cold-bloodedly murdered by a dubious American ‘diplomat’ in broad daylight. The PTI Women Wing handed over an Open Letter to Obama to the Commission. The PTI Leaders said both the Federal and Provincial government’s silence and resolve to protect the American mercenary and provide him diplomatic immunity shows just  where the Zardari government’s loyalties lie, and the PML-N government’s lip service and attempts to gain popularity with empty promises, has not materialized as people are demanding justice. The families of the three victims have asked for nothing but justice. Young Shumaila took her life when she saw that nothing was furtherest on the minds of our rulers and that the American killer would be given immunity for a crime, while she would live to see her husband’s memory besmirched with no fairness in sight. PTI leaders also said the International Law was being misused as the Americans had sent mercenaries under the garb of diplomats. [2] Letter to obama Pakistan Tehrik-e-Insaf (PTI) Woman Wing Punjab President Saloni Bokhari said that Imran Khan’s programme to visit and meet people of Lahore would give new hope to the citizens.  She said the visit would start on November 6 2009. She said that this would tell people that there was a leader in Pakistan who was outspoken and could stand up to dictators and corrupt political forces. She said this kind of a leader could demand what was in the interest of the country. She said he would not ignore the rights of the common man.  Saloni further said PTI would protect the nation’s sovereignty at a time when the political situation was deteriorating. Saloni Bokhari said it was time that every citizen, particularly the women, should come out to stand by Imran Khan in protecting our nation from succumbing to foreign pressures and corrupt leaders. It is time for women to raise their voice and safeguard the future of their children, she concluded. [3] Campaign Campaign

Pakistan Tehreek-e-Insaf (PTI) women wing leader Syeda Saloni Bokhari passed away today after losing the battle with cancer. She was fighting with the cancer from last many years but finally on 15th December 2017 cancer did it’s work and she left this world.  She was not only the founding member of PTI but also the President of Women’s Wing Punjab. She was appointed as the Punjab Women’s Wing President on August 28, 2011 in a simple ceremony attended by the PTI office bearers and members. Many members of PTI including Sarah Ahmad,‏ Maleeka Bokhari‏, Mohammad Sarwar, Munaza Hassan, Saifullah K Nyazee, Momina Basit and others showed grief on the sad demise. She was indeed the true and loyal worker of PTI who performed her services well. [4] Saloni bokhari passes away

Reaction of PTI members on her Death Condolences started pouring in from various PTI leaders as the news of her demise broke. PTI chief  Imran Khan tweeted that he was devastated by the loss of Bokhari who stood by him through thick and thin and was there when PTI was in its greatest crisis. Another PTI leader Naeem ul Haque said that Saloni Bukhari contributed immensely to the cause of PTI. He further said that she fought bravely against cancer but never gave up her wonderful loving smile. PTI’s  Jahangir Tareen  tweeted that Bokhari’s selfless services for PTI and the way she stood with Imran Khan during difficult times can never be forgotten. Andleeb Abbas tweeted that Bukhari’s smile, courage, her contribution will light others forever. PTI leader  Shah Mehmood Qureshi  said that Saloni’s struggle and contribution to Naya Pakistan shall never be forgotten. [5] Reaction on death