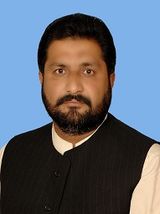 Sajid Nawaz Khan was born on 25 March 1975 to politician Haji Mohammad Nawaz in Peshawar. He holds degree of Masters in Business Administration. [1] profile

He joined politics after the death of his father Haji Mohammad Nawaz. Khan ran for the seat of Provincial Assembly of Khyber Pakhtunkhwa from PK-7 Peshawar-VII constituency as an independent candidate in Pakistani general election, 2008 but was unsuccessful. He later joined Pakistan Tehreek-e-Insaf and was awarded a PTI ticket to run in 2013 election despite opposition from the Khyber Pakhtunkhwa wing of PTI. Khan was elected to the National Assembly of Pakistan on a ticket of Pakistan Tehreek-e-Insaf from NA-3 (Peshawar-III) in Pakistani general election, 2013. [2] career