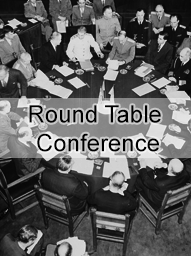 The three Round Table Conferences of 1930–32 were a series of conferences organized by the British Government to discuss constitutional reforms in India. They were conducted as per the recommendation of Jinnah to Viceroy Lord Irwin and Prime Minister Ramsay MacDonald . Demands for swaraj, or self-rule, in India had been growing increasingly strong. By the 1930s, many British politicians believed that India needed to move towards dominion status. However, there were significant disagreements between the Indian and the British political parties that the Conferences would not resolve. 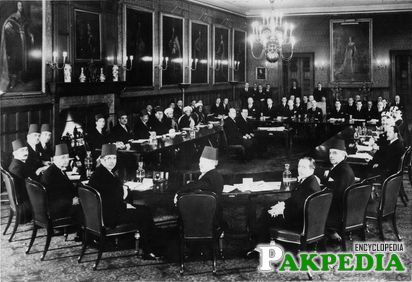 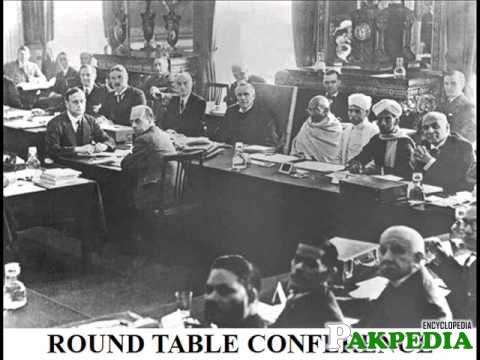 Round Table Conference in London 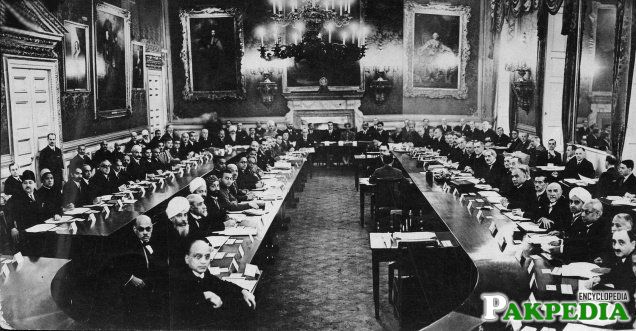 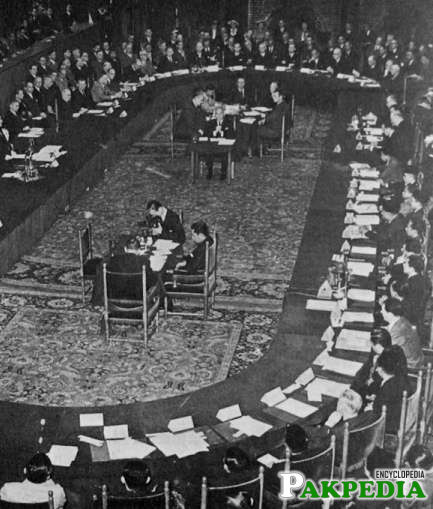 First round Table Conference in London

As both the Muslim League and the Congress Party had boycotted the Simon Commission , The British announced that a Round Table Conference was to be held in London and Indian Political leaders and princes would be invited to discuss the framework for future constitutional reforms with the British government. The Viceroy , Lord Irwin , announced that a series of conferences would be held in London in which all segment of Indian political opinion would be given a chance to discuss the future path of constitutional reform. He also said that if sufficient political and constitutional progress was made at the talks , dominion status for India might be granted .

Dominion Status was Known to mean full self rule but as part of the British empire . This was a dramatic incentive for all parties to attend the conference but The congress Party wanted a clear commitment from the viceroy that the specific purpose of the Round Table Conference was to draft a scheme for the granting of dominion status .The Congress also demanded an undertaking that the terms agreed in London would be implemented by the British government.

The first Round Table Conference was held in London during November 1930. Despite the absence of the Congress Party , some political advances were made during the talks. Firstly the princes declared that they were ready to join a future federation of India provided that some of their rights were recognized . Secondly , the British agreed that responsible and representative government at provincial level should be started and that power should also be shared at the center . No agreement was reached as to the question of Muslim weightage  in a future constitution.The Muslims were represented by an excellent team which included Muhammad Ali Jinnah , Maulana Muhammad Ali and the Aga Khan . The conference with optimistic speeches and the realization that it was the beginning of a long process . There was , however , the recognition that without the Congress Party , no final agreement could be reached .

Before the Second Round Table Conference was to start , the British took steps to ensure Congress participation. For this purpose , it was necessary for the viceroy, Lord Irwin , to meet Gandhi , who had been imprisoned during the agitation over the Civil Disobedience Movement . Irwin and Gandhi met in February and March 1931 to agree to the terms of future progress. The basic terms of the Gandhi -Irwin Pact were that the Congress Party would call off its civil disobedience campaign and participate in the next round of talks. The British , in return, agreed to lift their ban on the political activities of the Congress and released all those arrested in the movement on non-violent charges. The most important part of the Gandhi - Irwin talks was the discussion on the future constitutional framework. Gandhi Agreed to give up the demand for immediate full independence if the British agreed with the principles that a fedral India was necessary and that the Indians should be responsible for all matters which were safeguards in the interests of India. This was a formula which allowed both sides to claim a partial victory as both the Congress and the British badly wanted to resume the political process.

The Second Round Table Conference

The Second Round Table Conference was held in London from September to December 1931. Gandhi did attend eventually, in spite of last minute threats that he might not. He decided to represent the Congress Party alone and claimed that Congress spoke for the whole of India . Gandhi refused to recognize the problem of minorities within the subcontinent and dubbed them 'Communalists' and 'hangers-on' . The Muslim League had a strong delegation again with both Allama Iqbal and Jinnah attending. There was obviously little chance of an agreement with Congress taking such a hard line and the situation became more complicated with non-caste Hindu leaders demanding separate electorates for themselves . Theonly definite result of the Conference was the agreement that the North West Frontier and Sindh were to be made provinces with governors.The Conference broke up with the British warning that if no agreement was reached, a British -imposed settlement might be the only solution.

The Third Round Table Conference

The Third Round Table Conference had little chance of succeeding where the first two had failed and was the least important of the three conferences.The background to the third conference was not very encouraging as Gandhi had been rearrested for starting his civil disobedience campaign. The British had decided that in the absence of any agreement between the Congress and the Muslim League, it would impose the terms of the Communal Award forr future elections. The Muslims were given weightage in Hindu-dominated provinces, but the Muslim majority in the Punjab and Bengal was reduced. The major consolation for the Muslims was that Sindh was taken from the Bombay presidency and made another Muslim province. The Communal Award was unpopular with both the Muslim League and the Congress Party but as the Muslim League had themselves suggested a British award , they promised to abide by it . The Congress Party rejected it outright . The Third Round Table Conference , Therefore, took place in an atmosphere of less urgency , with the feeling that the conferences were becoming immaterial . The Congress Party did not attend again , nor did any of the major princes. At this stage , Jinnah had gone into voluntary exile from politics and was not even invited to the conference, although he was living in Londan at the time . He was disillusioned with the British , the Congress Party and even other leaders of the Muslim community who were constantly fighting with each other . Ironically , it was Jinnah's experiences at the first two conferences which had dissuaded him from further conferences of this nature , so the Muslims were represented by the aga Khan The conference opened on 17 November 1932 , with only 46 delegates , and broke up on 24 December with nothing of substance agreed or achieved . It was becoming obvious that the British would have to carry our their threat and decide the next stage of political reforms themselves. [1] Page 115-118