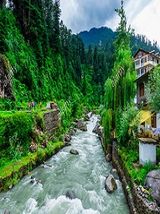 One of the “five rivers” that give the Punjab its name, the Beas river rises in the Himalayas in central Himachal Pradesh state and flows for some 290 mi (470 km) to the Sutlej River in western Punjab state. The river was also known as Arjiki or Vipas to the ancient Indians and the Hyphasis to the Ancient Greeks. The present name ‘Beas’ is thought to be a corruption of the word ‘Vyas’,the name of Veda Vyasa, the author of the great Hindu epic, the Mahabharat. The river is sometimes also referred to as ‘Vipasha’in Himachal, especially by the scholars. The Beas River marks the eastern-most border of Alexander the Great’s conquests in 326 BC. The river begins at the Rohtang Pass in the state of Himachal Pradesh, and merges with the Sutlej at Harike Pattan south of Amritsar in Punjab, India. The Sutlej continues into Pakistani Punjab and joins the Chenab River to form the Panjnad River; the latter joins the Indus River at Mithankot. The waters of the Beas and Sutlej rivers are allocated to India under the Indus Waters Treaty between India and Pakistan. The Beas River is the point of India’s eastern-most border, which marks Alexander the Great’s conquests in 326 BC. The river is known to have been the biggest hurdle in the way of Alexander’s India invasion. The name of the river ‘Beas’ is known to have originated from its Sanskrit name ‘Vipasha’. The origins of the name are often connected with ‘Vyasa’ of Veda Vyasa, proving that the river starts from the Vyasa Kund. The river went through development under the Beas Project for irrigation and hydroelectric power generation in the 20th century. The Pong Dam was finished in 1974 in the second phase, while the Pandoh Dam was completed in 1977 in the first phase, around 140 km upstream. Initially used for irrigation, the Pong Dam began the generation of power with a 360 MW capacity. [1] history The Rohtang pass at 13,050 feet ( 4,350 metres ), 51 km. North of Manali gateway to the valleys of Lahaul and Spiti lies on the main Manali-Leh highway. It has remained the main attraction for all tourists visiting this picturesque hill resort. During the season from early June to mid-October, thousands of tourists visit the pass eavery day. Besides affording a magnificent view of the snow-clad mountains of Lahaul, this pass is also the source of the river Beas. This river while fulfilling the thirst of many local travellers, also quenches the thirst of the fields of Punjab and Pakistan before flowing into the Arabian Sea. Thr river emerges from a cavern at the Rohtang pass and assume different identities as the seasons go by. From a clear blue easy flowing mountain river to an awesome torrent during the monsoon. The name Rohtang is a new one, the old one being Bhrigu Tung. On the South of this pass lay the civilized state of Kullant ( Kullu ), while to the North lay the more desolate and barren areas of Lahaul and Spiti. Both these areas were not connected and according to legend the people prayed to Lord Shiva to make a way. Lord Shiva with his trishul cut the Bhrigu Tung mountain and made a path that is known as the Rohtang pass. On the right of this pass lies the source of the river Beas also known as Beas Rishi. At this spot the great thinker and writer of the Mahabharta, Maharishi Vyas, meditated. To the South of this source lies another source known as Beas Kund. Both these mountain streams meet at Palachan village, 10 km. North of Manali to form the river Beas. In ancient times the river was not known as the river Beas but as Arjiki and till the time of the Mahabharta this remained its name. The world famous tourist resort of Manali is situated on the right banks of the river Beas. From Manali, this holly river after passing through dense evergreen forests reaches the town of Kullu. After covering hundreds of Kilometres through the hills, the river at Hari Ka Patan in Ferozpore district of Punjab embraces the river Satluj before flowing into Pakistan. [2] source The Beas River flows from a height of 14,308 ft at Rohtang Pass, Himachal Pradesh, from where it flows through the Kullu valley towards south, adding from various mountains bound tributaries. The river crosses Mandi and turns west, flowing into the Kangra valley at Sandhol at 1,940 ft above sea level. The river is divided into three directions, which join back after crossing Mirthal at 980 ft above sea level. The Beas meets the Shivalik Hills in Hoshiarpur and turns north, creating a boundary with the Kangra district, separating the Gurdaspur and Hoshiarpur districts. Coming down from the valley, it enters into Punjab at Kapurthala, and turns south and meets into the Sutlej River at Harike, at around 470 km. The major tributaries of the Beas River are Bain, Banganga, Luni and Uhal, along with Banner, Chakki, Gaj, Harla, Mamuni, Parvati, Patlikuhlal, Sainj, Suketi and Tirthan. The Sutlej enters into Pakistan and joins the Chenab River, which later flows into the Indus River. India shares the waters of the Beas and Sutlej rivers with Pakistan under the Indus Waters Treaty.

Its main tributaries are the Parbati, the Spin and Malana nala in the East; and the Solang, the Manalsu, the Sujoin, the Phojal and the Sarvati Streams in the West. In Kangra, it is joined by Binwa, Neugal, Banganga, Gaj, Dehr and Chakki from North, and Kunah, Maseh, Khairan and Man from the South. The Beas enters district Kangra at Sandhol and leaves it near Mirthal. At Bajaura, it enters Mandi district situated on its left bank. In Mandi district, its own Northern feeders are Hansa, Tirthan, Bakhli, Jiuni, Suketi, Panddi, Son and Bather.The northern and Eastern tributaries of the Beas are perennial and snow fed, while Southern are seasonal. Its flow is maximum during monsoon months. At Pandoh, in Mandi district, the waters of the Beas have been diverted through a big tunnel to join the Satluj. It flows for 256 km. in Himachal Pradesh. [3] tributaries

Rises from the Dhauladhar range in the Kangra valley of Himachal Pradesh. It flows in a South-Westerly direction before joining the river Beas. It receives both snowged as well as rainfall water from smaller channels.

It is also known as Baner Khad. It is a tributary of the Beas river and drains the central part of the Kangra valley. The Baner Khad rises as a small snow fed channel on the Southern slopes of the Dhauladhar range near Palampur. The general direction of flow of the Banner River is towards South-West.

It joins the Beas river in the Kangra valley. It rises from the Southern slopes of the Dhauladhar range. the river is fed by snow melt waters and channels emanating from springs. Large fertile sediments have been formed all along the river near its mouth.

It drains the South-Western part of Himachal Pradesh. The Chakki river rises as a small snow-fed and rain fed stream from the Southern slopes of the Dhauladhar range. The river enters Punjab near Pathankot and joins the Beas river.

It rises as a small stream from the snows on the Southern slopes of the Dhauladhar range in Kangra district. A number of small streams form the Gaj Khad. The Gaj river joins the Beas river a little upstream of the Pong dam lake ( now known as Maharana Pratap Sagar ).

Harla river rises as a small channel from the snows in the depression of the North-Western plank of Kullu valley. It joins the river Beas near Bhuntar ( Kullu airport ). Numerous snow-fed streams join the river Harla.

Luni rises from the South slopes of Dhauladhar in the Kangra valley. It merges with the river Beas in the central part of Kangra valley.

It rises from the Southern slopes of the Dhauladhar range and joins the river Beas. Steep slopes form the upper catchment of the Manuni river. There is a sharp fall in its gradient huge river terraces occur on the both sides of the river bed, which are used for cultivation extensively.

This river is a tributary of the Beas river in the Mandi area of Kullu district. It rises from the snow on the Southern slopes of the Pir Panjal range and thereafter it flows into the Beas river upstream of Kullu.

It rises from the water divide of the Beas and Satluj rivers in the lower ranges of the main Himalayas to the East of Kullu. Thereafter it flows towards South-West to join the Beas river. Hust before it cuts across the Dhauladhar range near Larji. The Sainj valley is V shaped and the river flows past a series of interlocking spurs. It has widened near the mouth of the river.

This river is a tributary of the Beas river in the Kangra valley. It rises from the South facing slopes of Dhauladhar range. A number of small channels join the Suketi river in its upper reaches. The river has formed huge terraces, most of which are under cultivation. The upper catchment of the river consists of steep slopes.

It is a tributary of the Beas river. It rises from the base of an offshoot of the great or main Himalayan range to the South-East of Kullu. Thereafter it follows a South-Westerly cource and flows into the Beas at Larji just before it cuts across the Dhauladhar range. Lower down, the valley opens up and it is fairly wide near its confluence with the Beas river.

It is another tributary of the Beas river which rises as two feeder channels in the area to the North of the Dhauladhar range in Himachal Pradesh. thereafter the two channels cross this gigantic mountain barrier and merge at the base of the Southern slopes to form the main channel of the Uhl river in Kangra area. It flows for a considerable distance along the base of the Dhauladhar range. Then turns towards the South-East to merge with the Beas near the town of Mandi. An ill-fated group of students of a Hyderabad-based engineering college, merrily taking photos on the banks of the Beas river in Himachal Pradesh, were washed away in the swirling waters which suddenly rose several feet . 24 students were caught unaware when hundreds of cusecs of water was discharged from Larji Hydro Power Project’s reservoir.
A team comprising 84 National Disaster Response Force (NDRF) men and 10 divers carried out a search operation in the turbulent Beas river from the accident spot at Thalaut and Pandoh dam. They were able to recover bodies of five people from Himachal Pradesh’s Mandi district. The five bodies that were recovered and all the survivors were flown to Hyderabad by an Air India flight . [4] misfortune