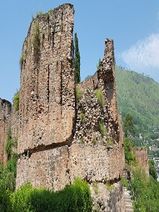 Red Fort – also known as the Muzaffarabad Fort was built by the Chak rulers of Kashmir. The current locality us called Center Plate Locally, it is known as the “Rutta Qila” or just “qila There is a Red Fort in Muzaffarabad which is in dire need of attention.

The fort — or what remains of it — is a 15-minute drive from the hotel and gets the red in its name from its crimson hues. It is called the Rutta Qila, which translates to Red Fort in English.
Historians say the fort was built after the Chak rulers of Kashmir realised there was a potential threat to their city from the expansionist Mughals. The fort was thus built to serve as a raised defensive post that could be a staging ground for counter-offensives.

A strategically important location was chosen for building the fort:  a large rock which is surrounded by a U-shaped curve carved by the River Neelum which flows on its eastern, northern and western sides.

Reign of the Chak Dynasty

Initiated in 1559 during the reign of the Chak Dynasty, the fort was built to develop a second line of defense while at the same time providing cover to the Fateh Garh Fort in Dub Gali Pass, west of what is now the city of Muzaffarabad.

The Red Fort had three levels, with the main gate on the eastern side of the upper level. The lower level of the fort once had stairs descending all the way down to the river, with the two levels connected to one another through a now-destroyed middle level.

But all of the rulers’ precautions could hold off the Mughal advance, and Kashmir was annexed in 1587 or so.  When Emperor Akbar visited his newly-won domain, he chose this route to return to the Mughal capital as it was the easiest one. When he reached Chakrs Bahak (now, Muzaffarabad), he stayed there for a week and a royal travel lodge was built for future visits.

The fort then lost its strategic importance and was forgotten until 1646 when Sultan Muzaffar Khan of the Bomba Dynasty — the founder of Muzaffarabad — repaired and completed the fort, using it as a military base.

In 1846, Maharaja Gulab Singh of the Dogra Dynasty began repairs and an extension on the fort once again, and his successor Maharaja Ranbeer Singh completed it, giving it the form it had before it became a ruin. The fort was then used by the military till 1926, after which a new cantonment was built, leaving the red fort abandoned once again.

Even the materials used in this structure, during its building and multiple repairs, tell their own tales. Ranging from rounded stones, rubble, red brick masonry and lime and clay, these materials speak of architectural development through the ages. And despite the massive damage to it after the quake, the fort still stands with all its inherent glory, grandeur and history.
[1] About Red Fort

A few weeks back, my family and I got a chance to visit the area to see the development projects initiated by the government with the aid of various donor countries for the rehabilitation of those who suffered during the tragic earthquake.After a three-hour drive from Islamabad, we reached the capital of AJK. I braced myself for the worst, as memories of the devastation this city had suffered in 2005 came flooding back. The last time I had visited this city, houses and markets alike had been razed to the ground and thousands of people lay either dead or injured. What was once an awe-inspiring sight — a city of breathtaking beauty –had been transformed into a graveyard that day. As I looked upon at the vast expanse of misery and tears, where the green of the grass was stained by the red of blood, it seemed the beautiful city would never live again.
This time, however, I was greeted by an encouraging scene; development was underway and the government was working on improving the infrastructure for the people.  Maybe, I was wrong. Maybe, the sensation of foreboding I had felt was misplaced. Maybe, the city could be whole again.

After a brief stay at the lavish and picturesque Pearl Continental Hotel, my family and I reached our destination: the Red Fort of AJK. Muzaffarabad Fort, generally known as Red Fort is a witness to the ancient history of this great city. It is said that construction of Fort was initially taken up by chuk rulers to counter the offensives of the intruders. However, Sultan Muzaffar Khan, the founder of Muzaffarabad town finally completed it in 1646. During the Mughal rule in Kashmir, this fort lost its importance, as they were more interested in other parts of their empire. But when Durrani’s took over the rule of this area, it again came in to being lime light and its importance was recovered. Afterwards after the Dogra rule of Maharaja Gulab Singh and Maharaja Ranbir Singh, the fort was reconstructed and extended according to their political and militarial requirements. However towards the end of 1947, the Dogra’s fled away leaving the fort wide open to anybody. Since then it has braved devastating floods, ravages of time, and other hazards to project its inherent glory and historical background.

The Red fort is a witness to the ancient history of this great city. Muzaffarabad Fort, generally known as Red Fort, traces back a chequered history. It is said that construction of the Fort was initially taken up by the Chuk rulers to counter the offensives of the intruders. However, Sultan Muzaffarabad Khan, the founder of Muzaffarabad town, finally completed it in 1646. During the Mughal rule in Kashmir this Fort lost its importance, as they were more interested in other parts of their empire. But when Durrani’s took over the rule of this area, it again came into limelight and its importance was recovered. Afterwards during the Dogra rule of Maharaja Ghulab Singh and Maharaja Ranbir Singh, the Fort was reconstructed and extended according to their political and militarial requirements. However, towards the end of 1947, the Dogra’s fled away leaving the fort wide open to anybody. Since then it has braved devastating floods, ravage: of time, and other hazards to project its inherent glory and Historical background.

The capital of Azad state of Jammu & Kashmir, is situated at the confluence of the Jhelum & Neelum Rivers. Its elevation is 724 meters (ASL) and at a distance of 138 kilometers from Rawalpindi and about 76 kilometers from Abbottabad. Muzaffarabad has been named after Sultan Muzaffar Khan, the chief of the Bomba Dynasty (in 1652). Cradled by lofty mountains, Muzaffarabad is a blend of varied cultures and languages. Being the capital of the State it has all the necessary facilities of life. In addition, there are two historical forts, the Red & Black Fort, situated on the sides of river Neelum. The Neelum River streams, proudly through the hub of the town, joins river Jhelum at Domel and plays a dominant role in the micro climate of Muzaffarabad. The capital city of Azad Jammu & Kashmir, “Muzaffarabad” also serves as a base camp for the tourist, intending to visit tourist spots and other historical, cultural and traditional aspects of AJK.

Muzaffarabad is not only the hub of political and cultural activities but also has various spots for leisure. Domel, the junction point of Neelum & Jhelum Rivers, presents a magic beauty from here. “Lohaar Gali” situated 9 Kilometers from the city on Abbottabad road, offers a bird eye view of the capital city. At night, the lights of the city present an unforgettable scene from this point. Similarly, Muzaffarabad city can be viewed from Sathra of Tariq Abad by-pass road and Maira Tanolian. [3]About Red fort

Historical tourist lodge Barsalla is located at a distance of 100 kilometer from Islamabad and 40 kilometers from Muree. On the way to Muzaffarabad it is only 3 kilo meters from Kohala Bridge that is entry point in AJK. This Lodge was firstly built in Dogra rule but historical importance is due to founder of Pakistan Mohammad Ali Jinnah who was stayed here in 1944 when he was returning from Srinagar. That particular chair is still present in this lodge on which Quaid was seated. Dograas rulers used to stay here while traveling between Rawalpindi and Srinagar.   AJK Tourism Department   has repaired it after it was hit by 2005 earth quake and now it has seven rooms for tourists. In summer season cool breeze from river Jhelum gives a pleasant touch. This historical resort is a memorable place for a tourist which is also known as Quaid-e-Azam Memorial Rest House. [3]About Red fort

The awe-inspiring locus, with an altitude of 2924 meters above the sea level is located 32 Kilometer, eastward of Muzaffarabad. Due to its tremendous scenic beauty, velvet green plateaus and wonderful climate, it wins admiration of nature lovers. The view of the summit of the neighbouring mountain peaks spell bounds a tourist. Devotees of Saint Shah Hussain Bukhari, take pilgrimage to rejuvenate their heart. The adjacent Pir Asimar, Pawna, Danna and the areas in the bottom of Pirchanasi i.e. Saran, Sud Bun, Mushki, Sakki and Jarran Phirran are also worth seeing and ideal for hiking, trekking and camping activities. A tourist lodge at Saran (with an altitude of 1231 meters ASL)  provides accommodation facilities to the tourists while construction of extra accommodation is in progress. [3]About Red fort

The comely beauty of the place attracts a restive mind to prolong his stay. The picturesque Shaheed Gali, situated at the height of about 1640 meters above sea level is at a distance of about 16 kilometers westward from Muzaffarabad. From Shaheed Gali a trek of 4 Kms leads towards a wholesome spot namely “Sri Kot”. A tourist is bound to be fascinated by serenity for the backdrop of area. A Tourist Rest House is available for accommodation at Shaheed Gali. [3]About Red fort

Located at a distance of 19 Kms from Muzaffarabad and at the height of about 840 meters (ASL), it is a gateway to Neelum Valley and can be the first journey break on the way. A mini zoo and a fish hatchery have turned the place into a site of diversions. Some private hotels are available   according to the local standard.
[3]About Red fort