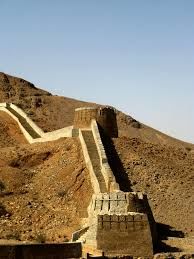 The Ranikot Fort also known as Dewar-e-Sindh (Great Wall of Sindh), with a circumference of about 26 km or 16 miles, is reputed to be the largest unexplored fort in the world. Since 1993, it has been on the list of tentative UNESCO World Heritage Sites. It is located in the Kirthar Range, about 30 km southwest of Sann, in Jamshoro District, Sindh, Pakistan.Ranikot is the most talismanic wonder of Sindh. Visible from five kilometers away its massive undulating walls twist and dip over the hills. Its walls, are built with dressed sandstone and reinforced with 45 bastions along the outer wall, of which 7 are rectangular and the remaining are round. All modified through the ages to accommodate the use of gunpowder, this perhaps makes it the largest fort in the world.[1] The Ranikot Fort 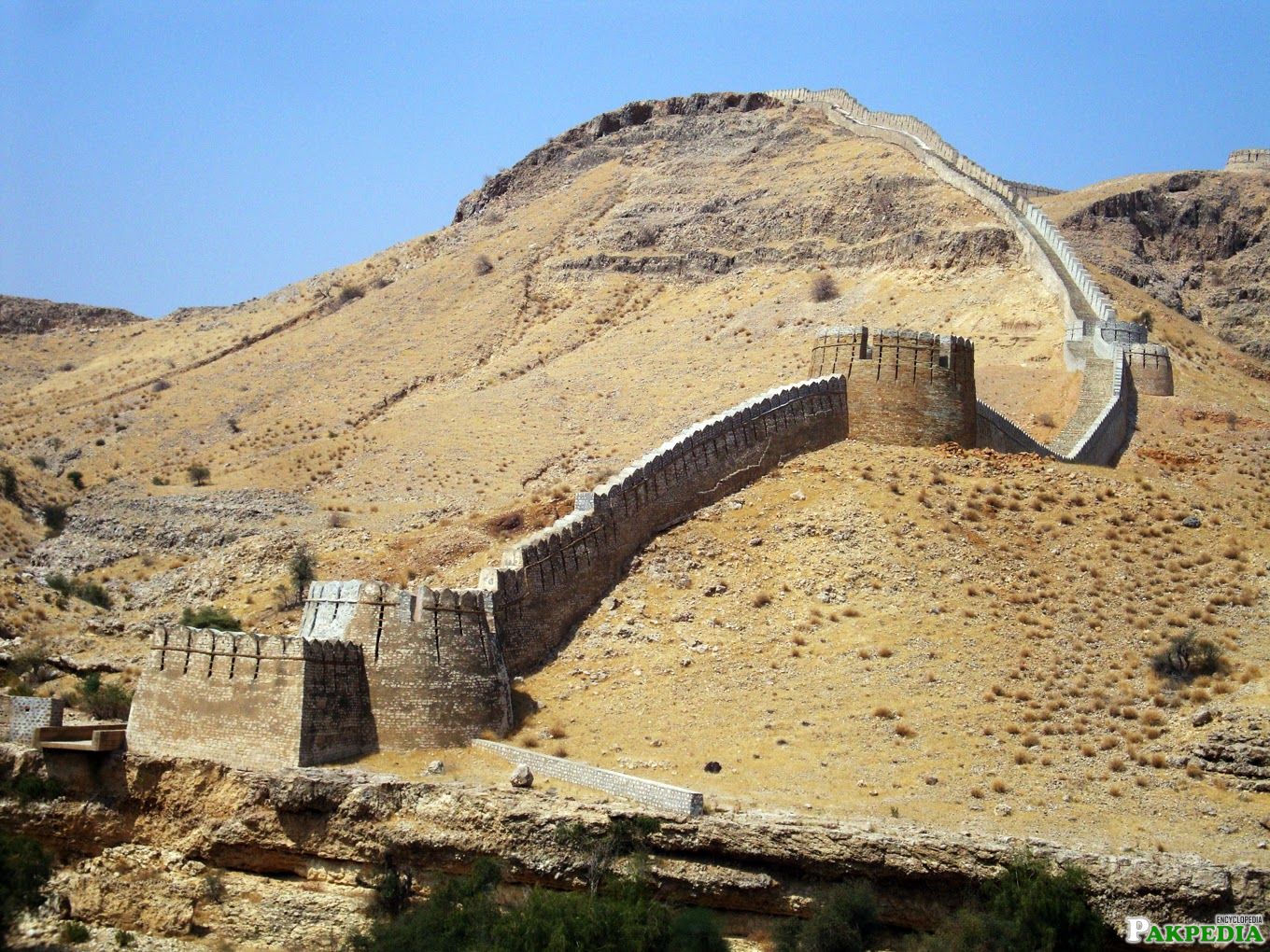 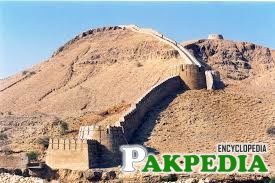 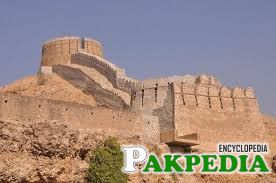 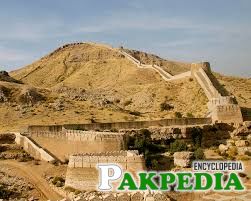 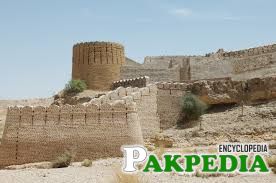 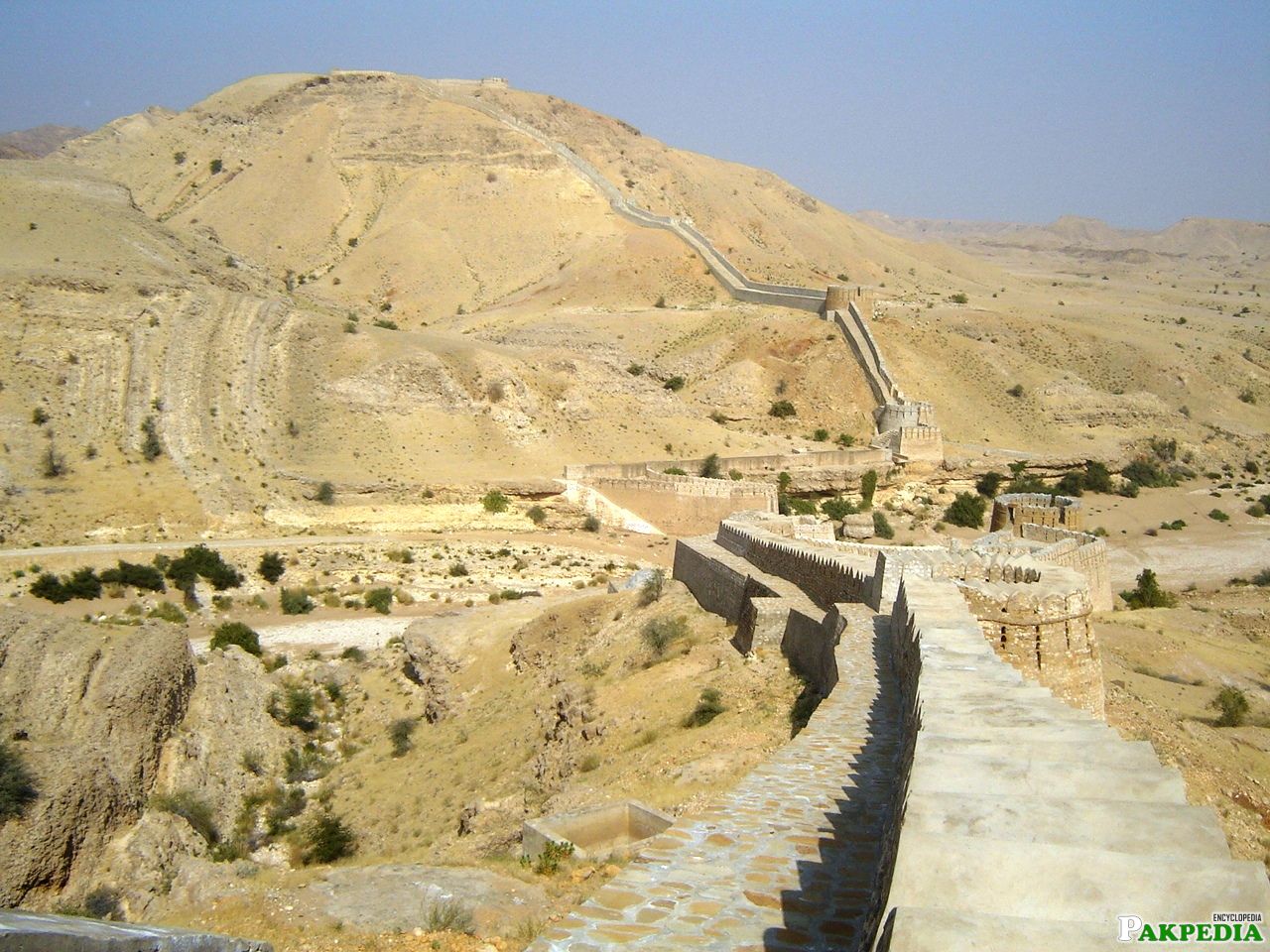 Mohan Nai, a rain-stream enters the fort from its rarely used western 'Mohan Gate', where it is guarded by a small fortification, changes its name to 'Reni' or 'Rani Nai' or rain-stream and gives the fort its name. Ranikot is thus the 'fort of a rain stream' - Rani. It runs through it, tumbles in a series of turquoise pools to irrigate fields and leaves the fort from its most used 'Sann Gate' on the eastern side. It then travels about 33 kilometers more to enter the Lion River - Indus.[3] Name Origination

Ranikot Fort is a historical fort

The original purpose and architects of Ranikot Fort are unknown. Now the question still remains - why build a massive structure that stands in the middle of nowhere, defending nothing? There are no plausible answers. One assumptions relate it to the Talpurs, who sent their families to Thar and Kach when Afghans attacked Sindh during the times of Kalhoras. However, after acquiring the rule of Sind, they wanted a safe haven for their families in times of war. So they built this fort or rebuilt an earlier fort that existed here?. Another view is based on its its location in Kohistan on the western frontiers of Sind that gave it its strategic value. Since Talpurs did not have good relations with Khan of Kalat, they wanted a secure western frontier - thus the requirement of a strong fort. Talpurs were also under threat from Durranis and Ranjit Singh and Ranikot added a lot to their defence. Even doubt exists its relation with the Kirthar Mountain range, since some believe that the mountains of Ranikot are called Tora Mountains, forming one of the boundaries of the fort.[4] History -  History

Some archaeologists attribute it to Arabs, or possibly built by a Persian noble under the Abbasids by Imran Bin Musa Barmaki who was the Governor of Sindh in 836. Others have suggested a much earlier period of construction attributing to at times the Sassanians Persians and at times to the Greeks. Despite the fact that a prehistoric site of Amri is nearby, there is no trace of any old city inside the fort and the present structure has little evidence of prehistoric origins. Archaeologists point to 17th century as its time of first construction but now Sindh archaeologists agree that some of the present structure was reconstructed by Mir Karam Ali Khan Talpur and his brother Mir Murad Ali in 1812 at a cost of 1.2 million rupees.[5] In 17th century

The Spring Of Fairies 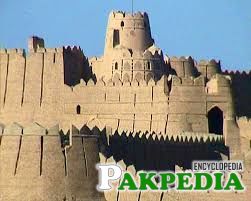 Ranikot Fort is also known as The Great Wall of Sindh

Most of the twenty six kilometers long wall of Ranikot is made of natural cliffs and mountains which at places rise as high as two thousand feet above sea level. Only about 8.25 km portions of its wall are man-made, built with yellow sandstone. This was first measured on foot by Badar Abro along with local guide Sadiq Gabol. As one enters the fort, one can find hills, valleys, streams, ditches, ponds, pools, fossils, building structure, bastions, watchtowers, ammunition depots, fortresses - all inside Ranikot, adding more to its beauty and mystery. A spring emerging from an underground water source near the Mohan Gate is named as 'Parryen jo Tarr' (the spring of fairies). According to a tale told by the local inhabitants, fairies come from far and wide on the Ponam Nights (full moon) to take bath at this spring near 'Karo Jabal'! Splashing sounds of water falling on the rocks can be heard at another spring, Waggun jo Tarr or "the Crocodile Spring", named so as crocodiles once lived there.[6] The Spring Of Fairies

Within Ranikot, there are two more fortresses, Meeri and Shergarh, each have five bastions. Meerikot takes its name from the word 'Mir' meaning top (for instance the top of a hill, chief of any Baloch tribe, etc.). M.H. Panhwar (a Sindhologist) disagrees upon the name's history being related to Mirs of Sindh, stating that "Of two forts inside the main Rani Kot fort, the lower one is called Miri and is a word used in Seistan for small fortress. It has nothing to do with Mirs of Sindh."Both the main Ranikot and the inner Meerikot have similar entrances - curved, angulated with a safe tortuous path. From the military point of view, Meerikot is located at a very safe and central place in the very heart of the Ranikot with residential arrangements including a water-well.[7] Additional Structures 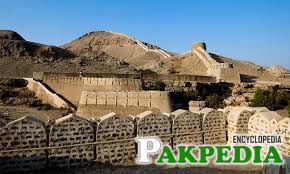 The original purpose and architects of Ranikot Fort are unknown

Beside the Mohan Gate and the Sann Gate, there are two more gates, rather pseudo gates. One is towards the side of ancient town of Amri. This 'gate' is called the 'Amri Gate'. Certainly it takes its name from the prehistoric ruins of Amri, but it must have taken this name much later than the times of Amri as the fort itself doesn't appears to be as old as the Amri itself. In fact there is a bridge over rain stream 'Toming Dhoro' exiting from the fort called 'Budhi Mori'. The breach in fort wall due to the river stream has been referred as a gate. Similarly, the Shahpir Gate to the south also appears to be a pseudo gate taking its name from a limestone rock with a rough shape of foot imprinted on it. The sacred footprint supposedly belongs to Hazrat Ali or some other religious personality and is venerated by locals. It seems to be a later breach in the fort wall instead of a formal gate because one can't find any bastion or watchtower or their remains at the site, needed to guard any formal entrance or exit points.[8] Additional Gates

Talpur Mirs used Meerikot as their fortified residence. One can explore ruins of the court, harem, guest rooms, and soldiers quarters inside it. Its 1435 feet long wall has five bastions. Every structure in the Ranikot has its own uniqueness and beauty. Looking up from Meerikot one can find another fortified citadel - Shergarh (Abode of Lions) built with whitish stone, it too has five bastions. Though its location at 1480 feet above the sea level makes this fortress a unique structure, it also makes it equally difficult for supply of water, which can only be had from the brooks and rain streams, hundreds of feet below. The steep climb up to Shergarh gives a commanding view down over the whole fort and its entrance and exit points. On a clear day one can even see Indus River, 37 kilometers away to the east.[9] More Imformation About  A mosque found in the fort appears to be a later modification of a watchtower or a later construction. There are also three graveyards, of which one has over four hundred graves, similar to those found in Chowkundi, with their sandstone engraved with motifs of sunflowers and peacocks. Of remaining two, one appears to be a graveyard of Arabs, while the third, located about a mile away from the Sann Gate, once had sixteen or seventeen graves earlier but now there are only four graves. The local inhabitants call it the Roman's graveyard. Scattered animal skeletons and prehistoric fossils can be found on the top of Lundi Hills.

"The size of Ranikot defies all reasons. It stands in the middle of nowhere, defending nothing" writes Isobel Shaw. So why was this fort built here in the desolate terrain of the Kirthar range? Many theories have been developed to answer this question. According to Ishtiaq Ansari, the Talpurs had sent their families to Thar and Kachchh when Afsharids attacked Sindh during the times of Kalhoras. However, after acquiring the rule of Sindh, they wanted a safe and secure place where they can send their families during the troubled times. This might have prompted them to rebuild this fort to their needs. Rahimdad Khan Molai Sheedai holds view that its location in Kohistan on the western frontiers of Sindh gave it its strategic value. Whereas Mazher Ansari is of the opinion that, it was first constructed in the Achaemenid Dynasty of the Persian Empire (550 – 330 BC). As this empire stretched from Turkey in the west, where a similar wall is constructed near the Caspian Sea called The Great Wall of Gorgan, which is 155 km in length and to the east up to River Indus in Sindh, where this majestic fort is located. Access to this man-made marvel of ancient times is possible through a metalled road, which goes up to Meeri Kot. [10] Detail Research

Restoration works were undertaken on the fort, particularly on the Sann Gate complex, the fortification wall extending south including the mosque and the small Meeri fort or palace within the main fort. These were undertaken by the Archaeology department of  Pakistan , the Department of Culture of Sindh and the Dadu district administration. Following allegations of poor construction and favoritism in award of contracts an enquiry was instituted in 2005. The Enquiry Commission's report indicated that the restoration works were poorly done with cement and new stone work without conforming to the "Venice Charter for the Conservation and Restoration of Monuments and Sites" and recommended stoppage of further work on the fort. Based on this report further restoration work was suspended in 2006.[11] Ranikot - The Dawn

The fort is huge, connecting several bleak mountains[12] Ranikot Fort - UNESCO of the Kirthar hills  along contours, and measures 31 kilometres (19 mi) in length. The fort is interspersed with several bastions in between and three  are of semi-circular shape. The northern part of the fort's perimeter is a natural high hilly formation while on the other three sides it is covered by fort walls.Within this main fort there is a smaller fort known as the "Meeri" which is about 5–6 miles from the entry gate of the main fort, and is reported to have served as the palace of the Mir royal family. The entire fort structure has been built with stone and lime mortar. The fort is built in a zig-zag form,  with four entry gates in the shape of a rhomboid. Two of the gates, facing each are crossed diagonally by the Sann river; the first gate is on the western side and is skirted by the river water and is difficult to approach.  The southern entry gate has a double doors gate. Within the gates there are two niches which have floral ornamentation and carved stones. The Sann gate is well preserved and can be climbed to reach the top of the fort from both sides to get a scenic view of the terrain around the fort. This gate is also the entrance to the Meeri.
Disclaimer: As an encyclopedia, pakpedia.pk's articles contains shared information which has collected from different sources and people. We welcome everyone for corrections and updates, Thank you.

The eye-popping Shah Faisal Mosque, nestled at the

The Badshahi Mosque or "Emperor's Mosque" was buil