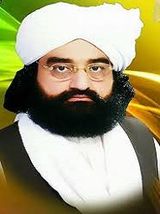 Pir Syed Naseer-uddin Naseer Shah Gilani was a Pakistani poet, great Islamic scholar and Sufi Muslim of the Chishti Sufi order. He was from Golra Sharif, in the Islamabad Capital Territory of Pakistan. Pir sahib was the ‘Sajjad-a-Nasheen’ of spiritual family of Golra Sharif and a poet of national eminence in his own right. He was a scholar, a researcher and author of about fourty books on several subjects. His poetic books had won acclaim. Pir sahib was against traditional mysticism and favoured it as a means of practical moral and spiritual training for development of personality. He also had vast following across Pakistan and abroad and would undertake visits of Europe for preaching purposes.  [1] life

Pir Syed Naseer-uddin Naseer Shah Gilani (November 14, 1949 – February 13, 2009) was a Pakistani poet, Islamic scholar and Sufi Muslim of the Chishti Sufi order. He was from Golra Sharif, in the Islamabad Capital Territory of Pakistan.

Pir Naseeruddin was the grandson of Pir Mehar Ali Shah (known as Pir of Golra Sharif) and the son of Syed Ghulam Moinud Din Gilani, known as Lalajee.His family History is stated underneath:[2] history Peer Naseer-ud DIn Naseer Shah Gilani has wrote more than 20 books. He was a great scholar,poet and reformer. Pir of Golra Sharif played important role in spreading the message of Islam in the Potohar region. People of the twin cities and the surrounding areas held the mystic personalities of Golra Sharif in high esteem. He was a renowned literary, scholarly and spiritual personality of Pakistan. The books written by Pir Naseer shah are:  [3] books

Pir Syed Naseer-ud-Din Naseer had great respect for Shaykh-ul-Islam and commended the contribution of Minhaj-ul-Quran International in different fields. He attended numerous programmes held at central secretariat of MQI. Just one day before his demise, he held a detailed telephonic conversation with Shaykh-ul-Islam Dr Muhammad Tahir-ul-Qadri. Nazim-e-Ala Dr Raheeq Ahmad Abbasi extended him invitation for participation in an upcoming Mashaykh Conference, which he happily accepted. [4] Minhaj Pir Naseeruddin died on February 13,2009 at the age of 58. He suffered a massive heart attack and was shifted to a private hospital. But he died before being provided any medical aid. Thousands of his followers converged on Golra shrine at sector E-11 from across the country and abroad after hearing about his death.
Renowned religious and spiritual personality and custodian of the Golra Sharif shrine, Allama Syed Pir Naseeruddin Naseer Gilani was laid to rest on February 14 at his family graveyard at Golra here on Saturday amid tears and prayers of thousands of his followers and devotees. Custodian of Baghar Sharif, Kahuta Sahibzada Allama Sajidur Rehman led the funeral prayer, which was attended by a large number of people from all walks of life including politicians, religious and literary personalities. Special traffic and security arrangements had been made to facilitate people who came from far-flung areas.  [5] demise

With the death of a person of Pir Syed Naseer-ud-Din Naseer’s stature, the country has been deprived of a great poet, spiritualist and scholar. May his soul rest in peace!. He was awarded with numerous titles in order to pay homage to his efforts for islam. [6] Tribute

Ministers, academicians, religious personalities and politicians expressed grief and sorrow over the sad demise of the custodian of Golra Sharif.