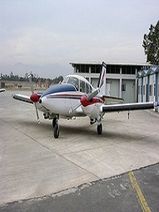 Peshawar Flying Club is the Aviation Company, situated adjacent
to Peshawar International Airport in the city of Peshawar in the province of Pakhtunkhwa.
It has the modern infrastructure built in view of the requirements of Aviation Industry.
The building comprise of admin. block, workshops, stores, battery shop, hostel and
well-constructed taxi track, hanger & tarmac. The admin. block is completed in 1992,
it has uptodate library, entertainment room, avionics shop, class room, indoor games facility, computer room & kitchen mess for students. The entire premises is well equipped with& heating facility. The hostel has accommodation for 14 students, mostly fully occupied at all times. [1] About PFC The Club was established in 1956 as Guarantee Limited company under the provisions of Companies Act, 1913 (Repealed ordinance) & presently registered with Securities Exchange Commission of Pakistan under the provisions of Companies Ordinance, 1984. The Club was initially established in camps with a Donation of two Tiger Moths & two Auster aircraft by Pakistan Air force. However, with the passage of time & endeavoring efforts, the Club enable to have its proper building & infrastructure with 7 aircraft consisting of Cessna-150 : 3 Nos., Cessna-172 : 1 No., Piper Aztec (twin engine) 1 No., Cessna-421 (twin engine  Executive aircraft) : 1 No. & Motor Glider: 1 No.

The Club has produce a record flying of more than 8000 hours in 1994-95 which is the record made by any flying clubs in Pakistan. The Club has an honor to train 22 PIAC Flight Engineers as well awarding commercial pilot licenses to the students from abroad, such as Yemen, Jordan, Sudan, Libya, Afghanistan, Iran, Egypt, and Syria etc.

Peshawar Flying Club bears good reputation in Pakistan as well as in Sub-continent region of the world. Moreover, the students from UK & USA have also shown their interest to join our Club for flying training. The staff of the Club consist of professional experienced, well-qualified & dedicated team which are producing the maximum output with their utmost efforts on 24/7 basis.

The Club has been blessed with the most experienced & well-professional team of Directors comprising the Board of Directors who support & motivate the staff of the Club to produce the best possible results. The Chief Executive of the Club is responsible for looking after the entire business affairs of the Club consisting of financial & administrative. [2] PFC History

The objectives of the Club are to produce professional pilots who can flourish their future in the Aviation industry. The Club is running Commercial Pilots as well Private Pilot courses besides the other commercial business such as charter flight operations for the Govt. of Pakhtunkhwa as well as private individuals & organizations, leaflet flower dropping & joy rides/air safaris. The Club welcomes all the students inside Pakistani as well as from abroad with a commitment to provide the best available facilities, training & services at all times. The Club has conducted regular Flight Instructor Training Courses in the past & intends to plan the same in future. Peshawar Flying Club looks forward to your arrival, Our care & attention & tutelage means â€œGood Speed & Safe Landing.

A flying start is likely to pay you rich dividends in future. [3] PFC Objectives

Flying is a profitable profession and thrilling hobby full of adventure and enthusiasm. Many people wish to become a pilot through our competent institute. [4] PFC Flying Since the Club established in 1956. The Club has produced 493 PPLs (Private Pilot License) and 426 CPL/IR (Commercial PilotLicense/Instrument Rating). The club has outstanding training Ratio into the Pakistan International Airlines and other national and international airlines.
PFC has flown above 100,000 hours during the last 20 years. This make PFC amongst safest flying institution in the world. [5] PFC Achievements

Aircraft Categories are given below in detail.