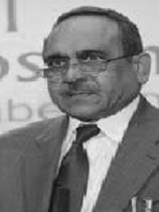 Pervez Butt (or Pervaiz Butt) born on 4 October 1942, is a Pakistani nuclear engineer and the former chairman of the Pakistan Atomic Energy Commission (PAEC) from 2001 to 2006. A nuclear engineer by profession, Parvez Butt played an important role in the development of the Pakistan’s nuclear power and weapons program. As chairman of PAEC, Parvez Butt helped establishing the particle accelerators, nuclear power plants, and started the research program to the field of Nuclear medicines. Parvez Butt is currently serving as an assistant professor of nuclear engineering at the Pakistan Institute of Engineering and Applied Sciences, and also serving as a “Science and Technology” member at the Planning Commission of Pakistan.
[1] Engineer Pervez Butt Engineer Pervez Butt was born on October 4, 1942, in Gujranwala, Punjab, British-India. At age 16, he was admitted to University of Engineering and Technology, Lahore, with a full scholarship. In 1962, he graduated and received his BS in Mechanical Engineering. After his graduation, Engineer Pervez Butt was employed in Pakistan Atomic Energy Commission (PAEC), where he did his post-graduate research. He was awarded PAEC scholarship in 1964 to study at University of Toronto, where he received his MS in Nuclear Engineering in 1966. He rendered his services to KANUPP for 19 years. In 1984, Engr. Butt was appointed as Director of PAEC, and in 1994, he was appointed as Director General and Member (Power) of the PAEC. As member (power) of PAEC, he  was responsible for all activities related to Nuclear Fuel and Power. He also served as the Chairman PAEC for five years, starting in 2001 to 2006. During his tenure as the Chairman, PAEC prospered in various areas of activities and expanded with creation of numerous new organizations.

The Pakistan Atomic Energy Commission (ادارہ جوہری توانائی پاکستان‎) is an independent governmental authority and a scientific research institution, concerned with research and development of nuclear power, promotion of nuclear science, energy conservation and the peaceful usage of nuclear technology. Since its establishment in 1956, the PAEC has overseen the extensive development of nuclear infrastructure to support the economical uplift of Pakistan by founding institutions that focus on development on food irradiation and on nuclear medicine radiation therapy for cancer treatment. The PAEC organizes conferences and directs research at the country’s leading universities.

CERN and Pakistan Consolidate Their Partnership During the President of Pakistan’s visit to CERN, the Laboratory and Pakistan decided to strengthen their collaboration. That was the time when Pervez Butt was the Chairman of PAEC. CERN’s Director-General and the Chairman of PAEC then signed an addendum to the 2003 Protocol Agreement covering the supply of additional equipment for the LHC. They also signed a letter of intent aimed at strengthening scientific and technical cooperation between CERN and Pakistan. The document envisages an extension of the existing partnership not only in the fields of new accelerators, detectors and information technologies, but also in the education and training of scientists and technical experts. Pervez Butt was actively involved in Pakistan’s civilian nuclear program. He, along with other Pakistani nuclear scientists, visited People’s Republic of China in 1986 to lead a Civilian Nuclear Technology agreement between Pakistan and People’s Republic of China. He was actively involved in the technical and contractual negotiations for the Chinese nuclear power plants and as chairman PAEC signed the contract for the second unit in 2004.