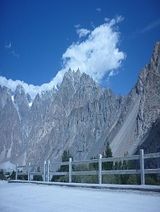 Passu is a village on the Karakoram Highway, beside the Hunza River, some 15 km from Gulmit, the Tehsil Headquarter of Gojal in the Gilgit-Baltistan region of Pakistan, and about 150 km upriver from Gilgit. It lies very near the tongue of the Passu Glacier, and just south of the tongue of the Baturaglacier. The latter is the fifth longest non-polar glacier in the world at 56 km,and reaches very near to the highway. .Tupopdan, 6,106 metres (20,033 ft), also known as Passu Cones or Passu Cathedral, lies to the north of the village; it is the most photographed peak of the region.Also nearby are the high peaks of Passu sir and shispare and Batura peak [1] Passu Village, est.5000BC Passu village on the Karakoram Highway, beside the Hunza River, some 15 kilometers from Gulmit, the Tehsil Headquarter of Gojal in the territory of Hunza/Nagar District of Gilgit-Baltistan region of Pakistan, and about 150 km upriver from Gilgit. It lies very near the tongue of the Passu Glacier, and just south of the tongue of the Batura glacier. The latter is the fifth longest non-polar glacier in the world at 56 km, (Citation needed) and reaches very near to the highway. The people are Wakhi and speak the Wakhi Language. Religiously they are Ismaili Muslim, the total population of Passu village is 1050 with 115 Households. The Major earning of Passu village from Tourism, Agriculture, especially fruit (Apple, Apricot and Cherry).
Passu Village has a unique Historical background three major custom of peoples are settled that is called in local language “Skoin” or “Kuch” one family member are Quli Kutor (Magh Kutor, Sakhi Kutor and DinAli Kutor), Alvi Kutor and Quba Kutor. Passu has a vast historical places and beautiful places but the major popularity of this village is Rock Carving which is correlated with Budha civilization 2000 BC, were found in Yeshvendan “Taqla Ghar”, Yunz valley near Passu Glacier and Khuramabad. According to the local history there was a Sham-Shan Ghat of Hinduism who burned the human body at Tipeskin at Khuramabad Passu, but it needs more research work to identify the truth.
The famous natural beauty of Passu is Tupopdan Peak, 6,106 metres (20,033 ft), also known as “Passu Cones” or “Passu Cathedral”, “Victory Peak” (because of its V Shape)  lies to the north of the village; it is the most photographed peak of the region, Also nearby are the high peaks of Pasu Sar, Shispare Sar, and Batura 1,2 and 3 .  [3] ABOUT PASSU VILLAGE: Tupopdan, “The Sun Drenched mountain”, also know as Passu Cathedral, or Cathedral Spires, towers over the tiny village of Passu. Passu is a tiny bastion of humanity surrounded by the overwhelming power of nature.Passu Cones are inspired by its unique structural attributes. Tourists have promoted the peak by giving it new names. Some call it “Passu Cones” and others “Passu Cathedral”. Mount Tupopdon is the most photographed peak of the region.

The Passu Glacier is one of the white glacier in hunza valley. many tourist vist passu glacier every year. If you look at the grey area on the right, this shows the historic level of the glacier, at a time when the Silk Route passed across the top of the glacier

The yunz valley connected the passu and batura glacier through an easy and scenic treak with a great views of two glacier and a zarth sar panoramic view around the passu village.see rock carving around the valley.it take five to six hours around hiking. [5] Tourists Attractions in Passu

Unpleasant ascent to the moraine offers views of about 7 000 meters high mountain top before Passu Sar. To the left above insignificant ridge separating the glaciers towers just the tip of the amazing mountains Shispare Sar.

View of the valley of Hunza

Once you scramble high enough to the moraine, the fantastic view back into the valley of Hunza River opens. In the gap between the spiky mountains blinks at you the ice pyramid of mountain Karun Kuh (6,977 m asl) towering above the fabled valley Shimsal that fails to belong to the VIP group of six thousand high mountains by only a few meters.

The right way to lake Borit leads from the moraine as close as possible to the rocky ridge. If you choose the side descent path, you can still link to the right path in the small pass under you. Lake Borit lies on the right under irrigational channel. If you go down by mistake through the valley to the left, it is again ok  you will come across KKH after a while and you are in 10 minutes in the village Husseini under the lake.
View of the rocky ridge is a beautiful from here  at the very right is the flat top of Ultar Sar (7 388 m asl), which you’ve probably already watched from the other side of Karimabad. [6] adventurous day hike in Passu