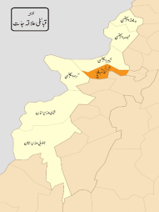 Orakzai Agency has an area of almost 700 square miles and has a general elevation of 5,500 to 5,600 feet above sea level. The important peaks are the Sangla (6325 ft) and the Chara Kandaco (5,643 ft). Its weather is characterized by intense cold in winter when the temperature falls below freezing and has mild summers. December, January and February are the coldest months and snowfall occurs in some areas. In the mild summers, the temperature usually does not go above 30 degrees centigrade. The surrounding forests are covered in dense and thick forests which produce a cooling effect in summers.The Orakzai Tribes take their name, which literally means the lost son (Orak Zoi) from a romantic legend about their ancestor, Sikandar shah, a prince from Iran. The prince was exiled or lost and after many adventures married and ruled over the Tirah.[1] Orakzai Agency – introduction The tribal area now forming Orakzai Agency was previously included in Frontier Region Kohat district and remained as such till 30-11-1973. The Biland Khel, a small pocket measuring about 6.5 square kilometers is also part of this agency and lies couple of kilometres off Thall, bordering North Waziristan and Kurram agencies. Responding to long standing demand of the Orakzais the then President of Pakistan announced the creation of Orakzai Agency on 3-11-1973 and was formally inaugurated on 1st December, 1973. Prior to its upgradation as an agency this area was administered as Frontier Region of Kohat district by the Deputy Commissioner, Kohat. The Orakzai Agency consists of two sub-divisions i.e., Upper sub-division and Lower sub-division. The Upper sub-division comprises two Tehsils i.e. Upper Tehsil and Ismailzai Tehsil, while the Lower sub-division also has two Tehsils i.e. Lower Tehsil and Central Tehsil. The land of the Orakzai tribes is located between 33° -33′ to 33° -54′ north latitudes and 70° -36′ to 71° -22′ east longitudes. It is bounded in the north by Khyber Agency, in the east by FR Kohat, in the south by Kohat and Hangu districts and in the west by Kurram Agency. The total area of the agency is 1,538 square kilometres. [2] Mini Bio –  Mini Bio Creation of the agency Creation of the agency had been announced at a grand tribal Jirga by the late Prime Minister Zulfikar Ali Bhutto at Samana and it began functioning on 1 December 1973. Before this date, the Orakzai tribes were part of Kohat and Hangu Frontier regions. The headquarters of the agency are in Hangu District whereas the Tehsil level head quarters are situated at Kalaya & Ghiljo. The valley is flanked by mountain ranges between 6000 to 7000 feet high. To the north is the Khyber Agency, to the west the Kurram Agency, to the east Peshawar District and to the south is the Kohat District which accessible via the Kotal Pass. Among the seven tribal agencies, Orakzai is the second smallest in area after Bajaur. The whole of the agency is a mountainous tract dissected by numerous dry waterbeds, especially in the south-western part of the agency. The major streams are the Mastura and the Khanki Toi; both of which originate from the hills in the west and run towards the east. The Orakzai tribes take their name, which literally means the lost son (Wrak Dzoy), from a romantic legend about their ancestor, Sikandar Shah, who was a prince from Iran, was exiled or lost, and after many adventures married and ruled in Tirah. The tribal area now forming Orakzai Agency was previously included in Frontier Region Kohat district and remained as such until 30 November 1973. The Biland Khel, a small pocket measuring about 6.5 square kilometres, is also part of this agency and lies a couple of kilometres off Thall, bordering North Waziristan and Kurram agencies. Responding to a long-standing demand of the Orakzais, the then President of Pakistan announced the creation of Orakzai Agency on 3 November 1973 and was formally inaugurated on 1 December 1973. Prior to its upgrading to agency status, this area was administered as a Frontier Region of the Kohat district by the Deputy Commissioner of Kohat. The Orakzai Agency consists of two sub-divisions: Upper sub-division and Lower sub-division. The Upper sub-division comprises two Tehsils, Upper Tehsil and Ismailzai Tehsil, while the Lower sub-division also has two Tehsils, Lower Tehsil and Central Tehsil. The land of the Orakzai tribes is located between 33° -33′ to 33° -54′ north latitudes and 70° -36′ to 71° -22′ east longitudes. It is bounded in the north by Khyber Agency, in the east by FR Kohat, in the south by Kohat and Hangu districts, and in the west by Kurram Agency. The total area of the agency is 1,538 square kilometres.[3] History –  History The agency can be ranked as cold temperate region with mild rains. The climate of the agency is pleasant in summer and extremely cold in winter. Summer season starts from May and lasts till October. June, July and August are the hot months. The mean maximum and minimum temperature during the month of June is about 40° and 27° Celsius respectively. Winter starts from November and continuous till April. December, January and February are the cold months. January is the coldest month with mean maximum and minimum temperature of about 18° and 6° Celsius respectively. There is no meteorological observatory in the area. However, climatic data recorded at Kohat as close proxy is given in the following table. The annual rainfall ranges between 250 to 500 millimeters. The relative humidity ranges from 25 to 85 per cent.

Presently there are hardly any differences or special characteristics about food, dress and dwellings which could distinguish them from their brethren of the settled area. Men usually clad in Shalwar-Kameez, put Kula Lungi (turban) over their heads and carry Chaddar on their shoulders. Women folk wear Shalwar Kameez with Dupata and when going out of homes wear Surka (veil). Gold and silver ornaments are worn by females on special occasions. The agency consist of two rivers i.e. Mastura and Khanki Toi running from west to east and draining into river Bara and Khanki. There are two valleys of the corresponding names bounded by parallel ranges in the same directions. The main river and the valley system are further divided by many tributaries and spurs.

The Orakzais are in the habit of constructing double storey houses which are made of stones and mud. The lower storey used for cattle and storage of grain and the upper storey is used for sleeping cooking purposes and also as ‘Morchas (bunkers) for defense purpose. The houses are not generally walled. They are often built on commanding positions with well placed towers for their protection. The Orakzais furniture consists of Charpais (beds) which are decorated for guests by spreading mattresses and beautiful bed sheets over them. Afridis are one of the most hospitable people. They consider Melmastiya (generous hospitality) as one of the finest virtues and greet their guest warmly with a board smile on their faces. Afridis feel delighted to receive a guest regardless of his past relations or acquaintance and prepares delicious meal for him or feed him with same meal and accommodation as he himself would await. Mr. L. Whit King says that “Afridis regard dispensing of hospitality as a sacred duty, and supply their guests with food according to their means.” Guests are usually entertained in a hujra (village meeting place). The host kills a fowl if he cannot afford to slaughter a lamb or goat and prepares a sweet dish (Halwa) to satisfy his sense of hospitality. Guests are not only looked after but also respected.The guest of an individual is considered as the guest of all and he is jointly entertained by the villagers in the Hujra. A variety of dishes are prepared and the elders of the family lunch with the guest on a common piece of cloth (Dastarkhwan) spread over a carpet, drugget or a mazri mat. It is one of the cardinal principles of Afridis hospitality to request the guest to sup or take a few morsels. After they have partaken of a meal, the company prays to Allah to give the host riches and prosperity and power of entertaining more guests. Dara Adam Khel is a land of rugged mountains rising in some cases to an elevation of 6500 feet. The hills are sparsely wooded with growth of shrubs and stunted trees, chiefly the ilex oak, wild olive, palosin (Kikar) and thorny bushes known as the gorgoora. In good seasons there is also an abundance of grass in these hills which is mostly cut and stacked fore sale. The land is dependent for its cultivation entirely on the rainfall. Wheat and maize are its common crops. The produce of these fields is as a rule kept for home consumption and is rarely sold in the market. The climatic conditions of Dara Adam Khel varies from extreme cold in winter to sultry hot in summer.

This section lives at the western head of the valley. In all matters Bosti Khel had an equal share with Sherakkis, the two sections being the descendants of two brothers. The Bosti Khels received a total subsidy of Rs. 1215 per annum in 1901 including the amount added on account of the construction of a good military road through the Kohat pass.

The Sherakkis, as mentioned above, are closely connected with the Bosti Khel. They received an annual subsidy of Rs. 1215, which they divided in equal shares between the Mobarak Khel and Bash Khel sub-divisions.

This section which is the off shoot of Gallai’s eldest son would have been the strongest if all the sections of unanimity had been its lot in life. This section enjoyed a subsidy of Rs. 1200 per annum, whicyh after paying a small 1/4th share to Kooiwals, they divided it into two equal shares between the Nekzan Khel and Feroz Khel sub-sections, who again further sub-divided it into small shares for each particular “Kandi”. The Zarghun Khel is the strongest and most important section. They occupy, with the Sherakki, the central portion of the valley. It consists of five main sub-section i.e., Mohammad Khel, Miri Khel, Mullah Khel -cum-Kasim Khel, Sani Khel, Talim Khel and Shpalkaiwals. Their subsidy of Rs. 950 was divided into five e1qual shares between the five sections above mentioned. Their allowances could be computed at Rs. 1130. To this has been added Rs. 1,000 on account of the construction of the new road in 1901.

The Akhorwals are descendants of the Barkai, Tatkai and Nur Malik sub-section, so the Hassan Khel family. Their original subsidy of Rs. 2250, Rs. 400 were allotted to the Akhorwals. The balance of Rs. 1850 they divided into the shares of different sub-section i.e., Gaddia Khel, Bolaki Khel two shares, and Pirwal Khel one share. In the allowances ofr the construction of the road they were given Rs. 750 per annum.