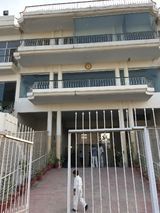 Niaz Stadium, Hyderabad is situated in the heart of once the 2nd and now the 3rd most populous city of Pakistan. Hyderabad has been named after Niaz Ahmed the late sports loving commoner of Hyderabad who was the motivating factor for building this stadium. Niaz Stadium Niaz Stadium, Hyderabad is located in the heart of once the fourth and now the sixth most populous city of Pakistan. The city of Hyderabad has been named after Niaz Ahmed the late sports loving commoner of Hyderabad who was the encouraging factor for building this stadium. The structure is in front of the three stars Indus Hotel. The inaugural 1st class match was played at Niaz Stadium between South Zone v/s Pakistan Education Board (PEB) on the day of 16–18 March 1962. Niaz Stadium becomes the 32nd first class ground in the Pakistan and second in Hyderabad.[2] Niaz Stadium –  Hyderabad is located in the heart

Just 5 Tests have so far been played at the city of Hyderabad two each against England and New Zealand and one against India. The inaugural Test match at the city of Hyderabad took place on 16–21 March 1973 against the team England, and it was left drawn after big scoring England picked up 487 with Dennis Amiss scoring 158. Pakistan in response, did even better, compiling 569 before declaring after 9 wickets had fallen. Mushtaq Mohammad hit 157 and Intikhab Alam 138. England played out time by hitting 218 for six wickets for the match to end in a draw.[3] 5 Tests have so far been played –  city of Hyderabad

The last Test was played at Niaz Stadium, Hyderabad between the team Pakistan and New Zealand on the day of 25–29 November 1984. Niaz Stadium celebrated staging this Test cricket’s 1000th with Pakistan winning the rubber with more than a day to spare. Javed Miandad became the 2nd Pakistani after Hanif Mohammed to score a century in each innings of a Test.

Although, an international match was played on the day of 24 January 2008 between Pakistan and Zimbabwe after 10 long years. The PCB made few improvements to the stadium. Individuals of Hyderabad were pleased but some were furious too as they were unable to purchase tickets for the match.[4] The last Test was –  played at Niaz Stadium, Hyderabad

Niaz Stadium also became the venue of 1987 World Cup inaugural match between Pakistan and Sri Lanka.A capacity crowd of 15,000 welcomed the hosts Pakistan and was rewarded with a victory, but one considerably narrower than had been expected. The Pakistan innings was founded on a third wicket stand of 113 between Rameez Raja and Javed Miandad. Rameez took 30 overs to reach fifty but Pakistan were aided by some wayward opening bowling from the Sri Lankans. Javed’s 103 came off 96 balls and included 6 fours. It was his 6th century in ODIs. He passed fifty for the ninth consecutive match and reached 4000 runs in his 120th ODI. When Sri Lanka batted, Kuruppu was soon caught at the wicket off an out swinger and Roy Dias was deceived by Abdul Qadir’s googly, which hit his middle stump. It was Qadir who presented the Sri Lankans with major problems, frequently beating the bat and proving most economical. Roshan Mahanama played an intelligent and forceful innings and hit the first six of the tournament. He and Gurusinha added 79 for the fourth wicket and there was some enterprising batting by Aravinda de Silva but Sri Lanka could never match the required run rate.[5] Niaz Stadium also became the venue –  1987 World Cup inaugural match

The last One-day International at Niaz Stadium was played between Pakistan and India on September 28, 1997. Openers Saeed Anwar and Shahid Afridi‘s undaunted stroke play was the dominant factor in Pakistan’s five-wicket victory. There were setbacks after the roaring start that showed up Pakistan’s susceptibilityNiaz Stadium against a spin attack, but off-spinner Rajesh Chauhan’s inadequacy on a pitch that was well exploited by colleague left-arm spinner Nilesh Kulkarni, was a factor that gave Pakistan an easy victory. The prospect of an intense contest had diminished in the morning session when Waqar Younis, Saqlain Mushtaq and Aaqib Javed limited India’s score to paltry 170. In the end, India was well short needing another 40 runs. In the 1997 – 98 season West Indies were scheduled to play a three-day match against Habib Bank on November 24-26, 1997 at Niaz Stadium. This was abandoned after a protest against sub-standard accommodation facilities.[6] The last One-day International at Niaz Stadium –  September 28, 1997 The agreed one-dayer on November 26, 1997 could not be played because of overnight rain and seepage on the pitch due to inadequate covers.