Mazar-e-Quaid or the National Mausoleum is a prestigious tomb of the founder of Pakistan, Muhammad Ali Jinnah; it is a worldwide recognized iconic symbol of Karachi. Situated at the heart of Metropolitan city of Karachi, the mausoleum was completed in the 1960s.[1] mazar e Quaid Karachi 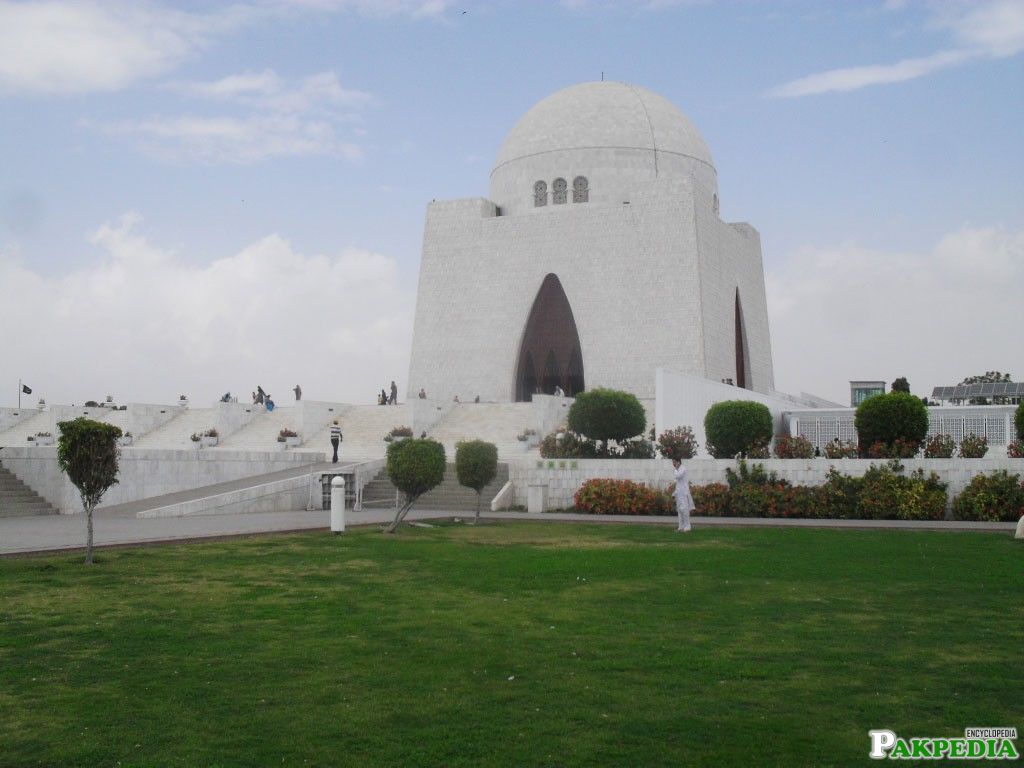 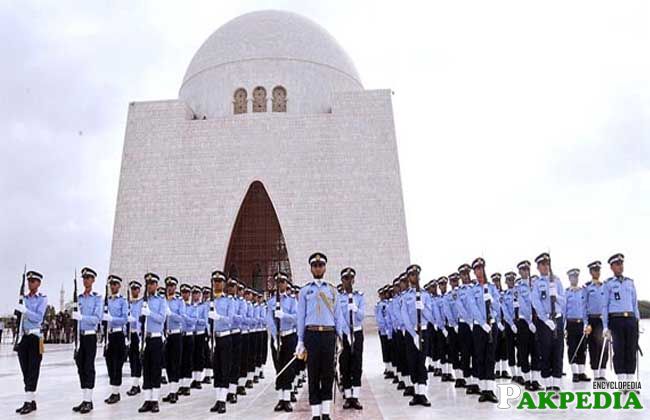 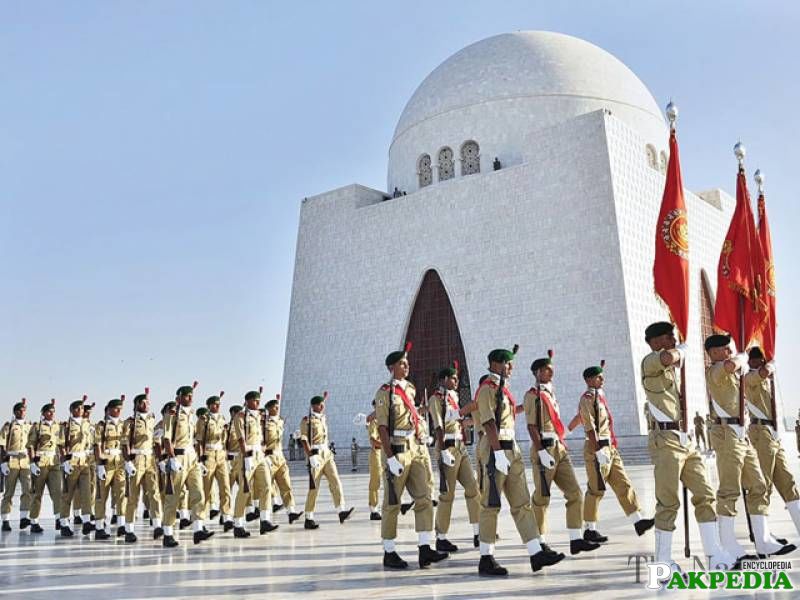 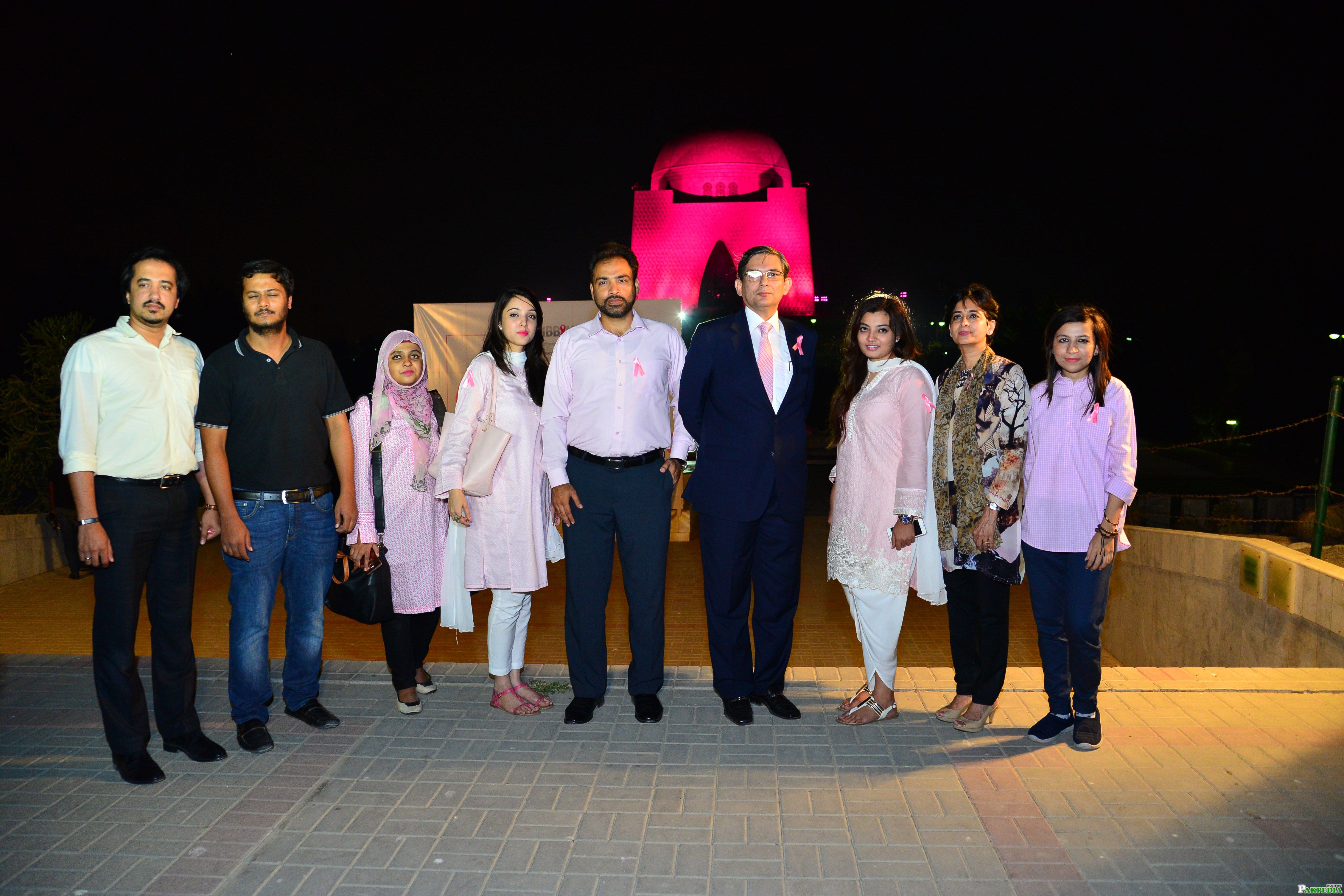 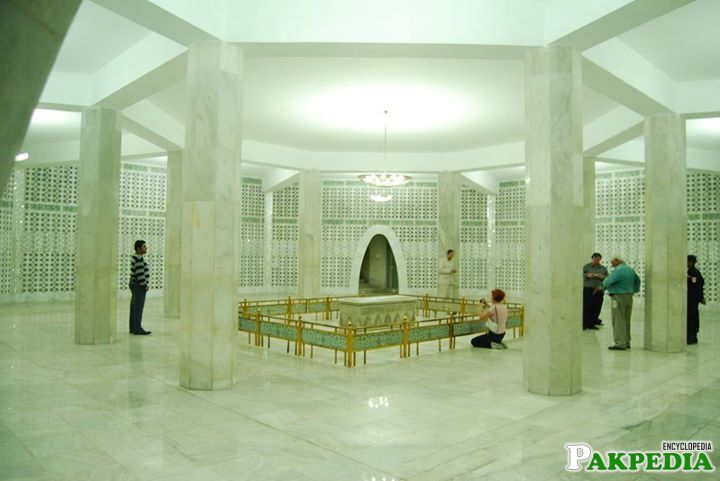 On 31 July 1960, the then president of Pakistan Ayub Khan laid the foundation stone of the mausoleum on Muhammad Ali Jinnah (M A Jinnah) Road. The government of Azad Kashmir provided the wood for the construction of the mausoleum. In the foundations of the mausoleum, copies of biography of Jinnah, some old coins and copy of Pakistan Resolution were also preserved. The design of the mausoleum was prepared by Mr Yaya Merchant. The mausoleum is made of white marble with curved Moorish arches and copper grills reset on an elevated 54 square meters platform. Since the main mausoleum stands on the rear side of the platform and draws the whole attraction by the maximum advantage it takes of the available height, the back portion is shortened and almost closed by a low retaining wall. There are no steps on this side, which faces east.[2] Mazar e Quaid Introduction

Location and the notable ceremonies

The Jamshed Quarters area near Gulshan-e-Iqbal Karachi is the location of the tomb. Quad-e-Azam died in 1948 but the tomb was constructed 12 years after his death in 1960. The location is considerably calm as compared to the city buzz of one of the largest global economies which is centered not too far from the spot. The Karachiites can see the glowing and marvelous tomb from several miles at the night time. There are a few military and official ceremonies held here on annual basis on different notable occasions such as Pakistan Day (23rd August), Independence Day (14th August), Quaid’s birthday (25th December) and Quaid’s Death anniversary (11th September). When some dignitaries or other significant people from different countries visit Karachi then they do visit Mazar-e-Quaid on their official tour to the country which is a gesture of respect for the great Quaid-e-Azam.[3] Mazar e Quaid Location & Notable Ceremonies

“No nation can rise to the height of glory unless your women are side by side with you. It is a crime against humanity that our women are shut up within 4 walls as prisoners. There is no sanction anywhere for the deplorable condition our women have to live in”.[4]Quote by Quaid e Azam

Idea of the architect

The original idea of the architect was perhaps to leave it in that position and let it remain concealed by the rough ridge that still clings on to the north-east corner of the enclosure. However, the little area available on this eastern side has been developed as a backyard and, without disturbing the original concept, a low flat roofed rectangular building has been put up, five feet away from the platform, to be used as a relic chamber. One part of the chamber is reserved for housing the relics of Quaid-e-Azam and the other accommodates the graves of the devoted companions of the Quaid. This later adjunct is a very simple construction deliberately meant that way so that the attention from the main building is not diverted.
Around the mausoleum there is a park fitted with strong beamed spot-lights which at night project light on the white mausoleum. Thus the glowing tomb can be seen for miles at night. The mausoleum was opened to general public on 15 January 1971.The mausoleum is located in a manner that all main thoroughfares of the city should converge here. The site once lay at almost at the end of the old city, but today it occupies a central place with the new growth of the city. The thoroughfares that impinge on the site strike at the four angles of a parallelogram which encloses the monument. Official and military ceremonies take place here on special occasions, especially on 23 March, 14 August, 11 September and 25 December. Dignitaries and officials from foreign countries also visit this place. On 25 December each year cadets of Pakistan Military Academy, Kakul mount guard of honour at the mausoleum to pay homage to the man whose country they take allegiance to very proudly defend.[5] Mazar e Quaid Idea of the architect

The architecture of Mazar-e-Quaid has magnificent visual appeal. The design of the building was given by Yahya Merchant who is a renowned architect on global scale. The structure is built using the white marble having curved arches. The copper grills of the monument are elevated over a platform of 54 square meters. The covered area of Mazar-e-Quaid is 53 hectare and the dimensions of the center building are 75 x75 meters with a height of 43meters. The platform over which the building stood is 4 meters high above the ground surface. The entrance to the center building is given from all the 4 sides of the wall.There are 15 fountains installed in succession which leads to the main platform from one side. From all the other sides, the terraced avenues lead to the main gates of the place. The inner chamber reflects beautifully the green of the 4-tiered dapper looking crystal chandelier. The chandelier has great relevance at Mazar-e-Quaid as it is a gift given by the People’s Republic of China who is the best friend country of Pakistan. The park that spans all around the mausoleum is decorated with spectacular beamed spot lights giving a charismatic feeling at night time that mesmerizes all its visitors. The beamed spot light is creatively projected at the mausoleum which further adds to the beauty and charm of the place.
In the grave complex, three graves are in succession while one is at the northern side. The northern grave is of Fatima Jinnah which is beautifully decorated with black floral design at its base. For the other three graves, the one at the northern side is of Liaquat Ali Khan. The southern end grave is of Sardar Abdur Rab Nishtar and the middle one is of Noorul Ameen who was the Vice President of Pakistan. All the 4 graves here have a box type exterior and they are made from white marble (Italian).[6]Mazar e Quaid Architecture

Premises of the mazar e Quaid

The premises of the mazar e Quaid is beautiful, serene and peaceful. People come and visit and have a picnic and enjoy themselves. Many people use to visit this historical place every year mostly on the 14th of August to pay the tribute to their leader. people who have plans to visit there, groupin.pk can help them by so there visit can be memorable for them. Groupin.pk can provide you high discounts on various expenses of this tour like, discount on tour package, services, events, services and much more. If you are willing to avail these lucrative discounts then let groupin.pk know what exactly you are looking for on discounts.[7] Premises of the mazar e Quaid

Karachi is the 5th largest city of the world with lots of tourist attractions where Mazar-e-Quaid also holds a pivotal place. Karachi is getting congested with lots of traffic issues so people look for their convenience as well while planning to spend their free or leisure time at any outdoor location in the city. The tomb is centrally located in Karachi with easy road links and access to the location which urge a number of people to spend their evenings at Mazar-e-Quaid. The best way to spend your time is to first go to the center of the tomb to say a prayer for Quaid and then you have options to see the mausoleum in the courtyards of Fatima Jinnah and Liaquat Ali Khan. The gardens on all the sides of the mausoleum are lush green which can be an exciting place to enjoy all day in winters and only night time in summers as Karachi is a relatively hooter area dominated by summer for most time of the year. The garden area has numerous benches on the side where you can sit and enjoy the spectacular green landscape and the amazing white marble architecture of the tomb. Moreover, the 15 number of fountains in the vicinity cools down the hot temperature which is a treat to experience particularly in hot summer evenings.
As it is the last resting place of Quaid-e-Azam who is the founder of Pakistan, so every government gives special importance to the maintenance and preservation of Mazar-e-Quaid. It is the responsibility of the Sindh government primarily to look after its care and they are doing a good job. Proper security and maintenance staff is there who ensure that the place is well maintained with no signs of quality deterioration. Military professionals also take part in the security of Mazar-e-Quaid which significantly improves the level of services. It is probably the most well maintained significant monument of Pakistan which is visited by millions of visitors every year.[8] Mazar e Quaid Visitors Attraction

The construction of the Mazar-e-Quaid was finished in the 1960s.
The monument spreads over an area of 61 acre (3100 m²).
The foundation stone of this monument was laid by the then president of Pakistan Ayub Khan on 31 July,
1960.There are four entrances to the mausoleum.The Mazar-e-Quaid was officially opened to the public on 15 January, 1971.[9] Mazar e Quaid Facts

President Mamnoon Hussain and his Chinese counterpart Xi Jinping Saturday said Pak-China friendship and strategic partnership has been strengthening and moving forward “day by day and generations to generations” in the interest of the peoples of the two countries and for the peace and stability in the region.
This was stated by President Mamnoon Hussain at the unveiling ceremony of a new chandelier gifted by China for the mausoleum of Quaid-e-Azam Mohammad Ali Jinnah. China’s Ambassador Sun Weidong read out the message of China’s President Xi Jinping.
Speaking on the occasion, President Mamnoon Hussain said, “We are moving ahead for attaining our national goals in the light of the ideals of Father of the Nation, Quaid-e-Azam Mohammad Ali Jinnah for democratic freedoms, social justice, economic development and stability.”
The president said, “China’s friendship is our precious asset and the gift of the chandelier is a beautiful symbol of this close relationship.”
President Mamnoon Hussain thanked China’s president and government for this beautiful and lovely gift of chandelier. He also appreciated the Mazar’s administration for looking after the mausoleum.
Chinese President Xi Jinping, in his message read out by Chinese Ambassador Sun Weidong, expressed his delight over successful completion of China-aided chandelier project at Mazar-e-Quaid.
The Chinese president on behalf of the Chinese government, people, and himself extended warm congratulations to the people and government of Pakistan.
He said a crystal chandelier, presented by the Chinese government 46 years ago as a national gift to Pakistan became an often-quoted memory of friendly exchanges between China and  Pakistan .

“Now the maintenance of the chandelier has been completed smoothly. It will become an important symbol of the friendship for generations between our countries and our peoples,” he added.
President Xi Jinping in his message said, “China-Pakistan friendship serves the fundamental interests of our two countries and our people, and contributes to peace and development of our region and the world at large. I attach high importance to China-Pakistan relations, and would like to join hands with you to promote greater development of China-Pakistan all-weather strategic cooperative partnership.
“May China-Pakistan friendship pass on from generation to generation and retain its full vitality forever.”
President Mamnoon gave shields to China’s Ambassador and Commercial Councillor, Joint Secretary National History and Heritage Division Junaid, Mazar Management Board’s Engineer Arif Chaudhry and the representatives of the Chinese company which made the chandelier.
Prime Minister’s Adviser for National History and Heritage Irfan Siddiqui also spoke on the occasion. Senior Sindh Minister Nisar Khuhro and Karachi Mayor Waseem Akhtar, among others, were also present.[11] Mazar e Quaid  China gifts chandelier