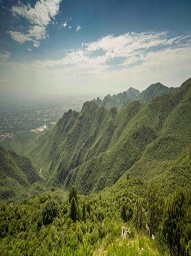 Islamabad gets a lot of attention for its peace, quiet and serenity which is obviously because of the Margalla hills surrounding the city. Exploring these hills make you fall in love more with city . There are several tracks in the hills which end up at Damn-e-Koh, Monal or Peer Sohawa. 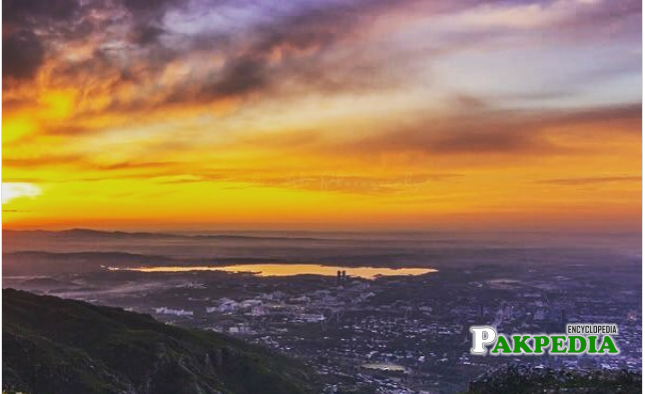 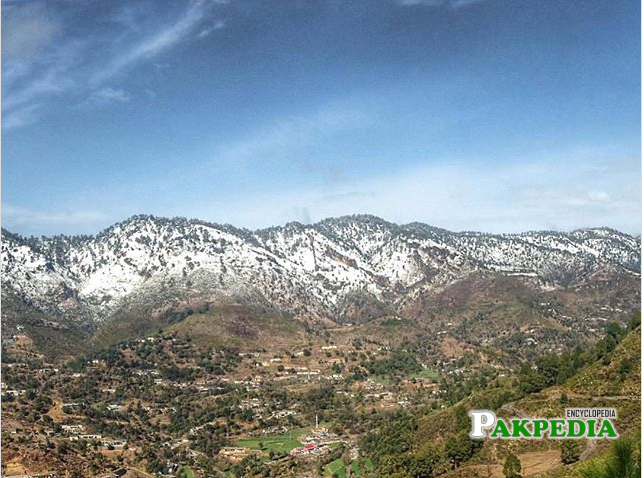 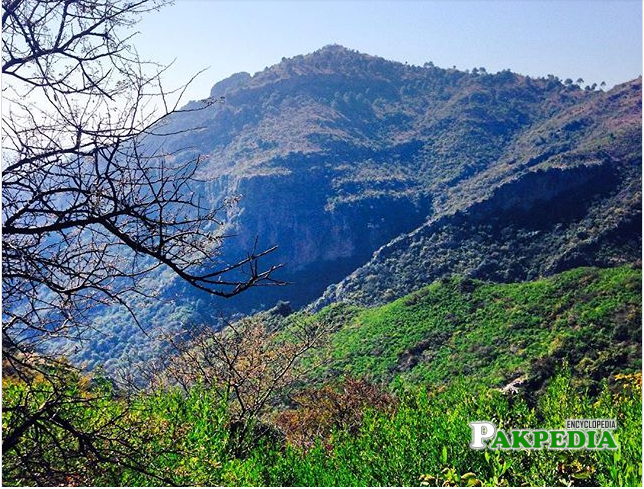 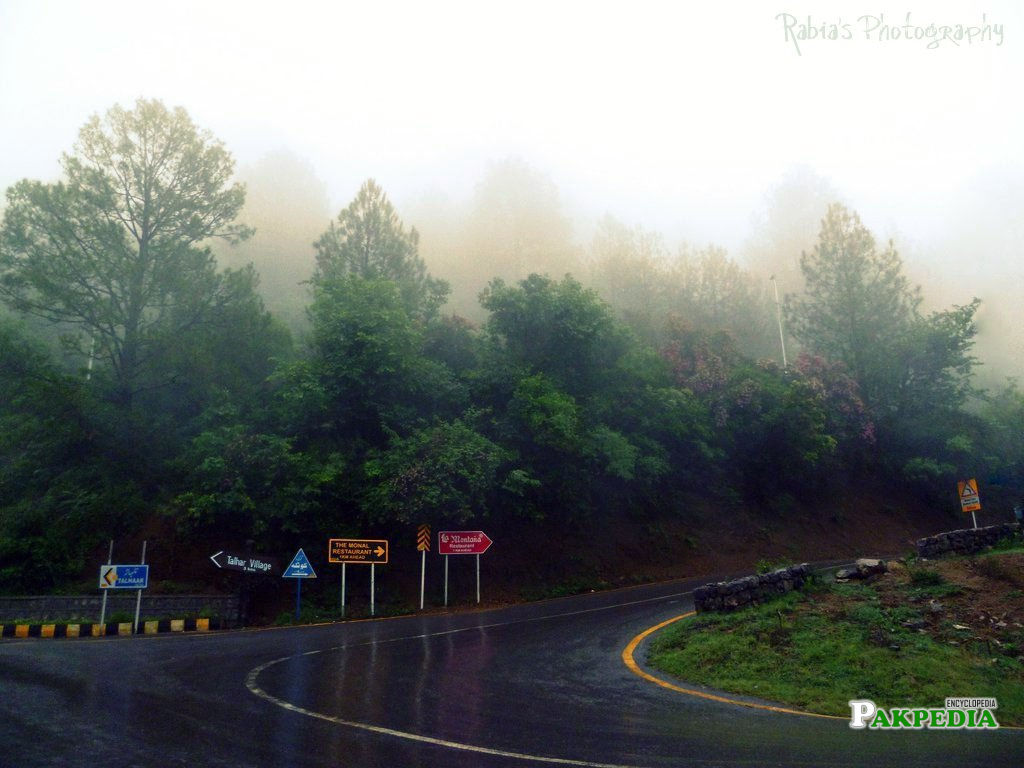 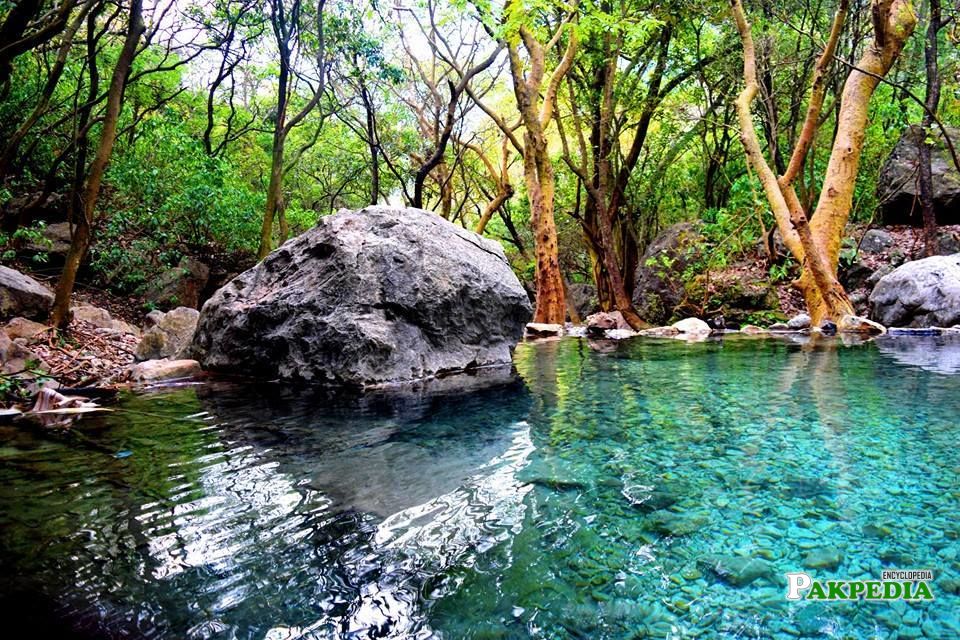 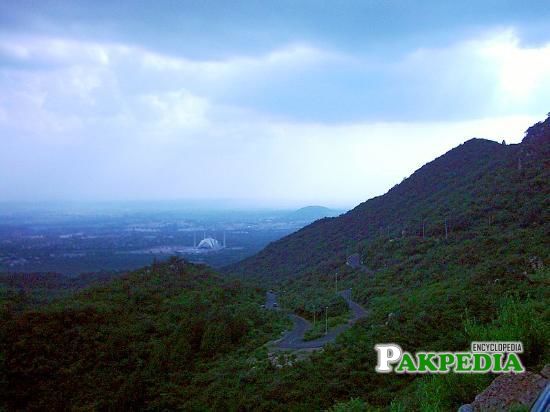 The stagnantly picturesque entrance to the Margalla Hills

It is true that Islamabad came into place here just because of the natural beauty. Margalla hills play a major role in the beauty of the Capital. Just a few minute drives from the city take you the Alpine paradise which is the range of Margalla. In the sector F-8 the Government established some places for the visitors. A zoo is also here for kids and families. Nearby to the zoo you will find a well prepared side for the hiking. If you are nature lover and want to climb on the hill then this one is a right place for you to explore the beauty of hills. Sometimes in the summer this area get affected with the fire.[1]Â  DetailsÂ The Saeed Trail-5 on the Margalla Hills

From the up above you could watch the whole city and famous place in Islamabad. Faisal Mosque is also visible from that place. Daman-e-Koh and Pir Sohawa are few places which are just 1,000 meter above the city and you can climb on them with ease. While climbing on the Margalla hills you are direct to do the activity along that person who is familiar with this area. Local community uses this track on regular basis for the fitness and exercise. 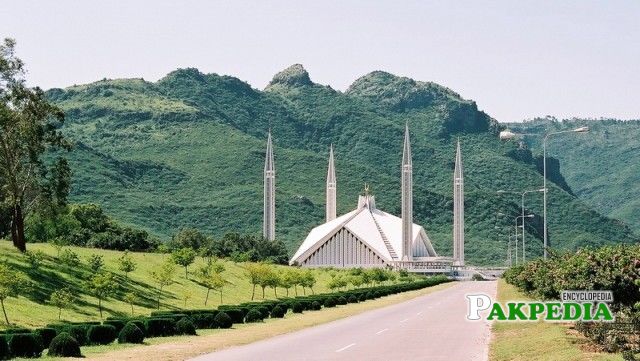 The phenomenal Faisal Mosque is the starting point of Margalla

The Margalla Hills are the continuation of the Himalayan mountain range. The soil on the hill is fertile and completely covered with green trees, herbaceous plants and rocks. The forest on the hills is the natural habitat for a variety of animals and birds. The forestry department of Pakistan and the authorities has tried their level best to revive tourism in this area. Every year, many private clubs along with the authorities conduct a hiking excursion to fetch up the importance of the Margalla Hills among all age groups. The authorities have made possible for people to visit the forest, roam about safely, and explore the natural resort. For people who wants to experience hiking and overnight camping can come here as it is the safest place for the purpose. 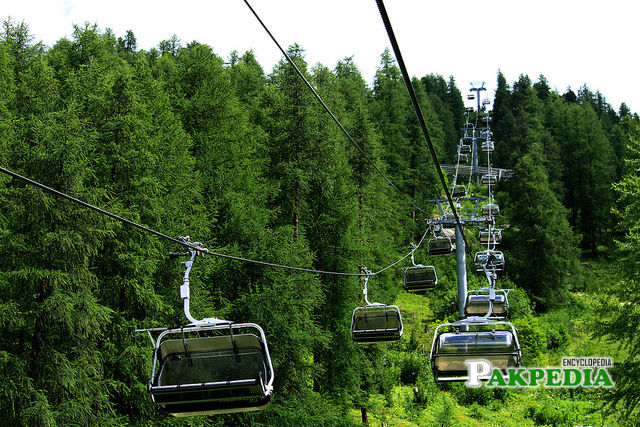 The two sides of Islamabad are surrounded by the hills. Therefore, it is possible and much easier to access. There are eight trails that vary in distances following: 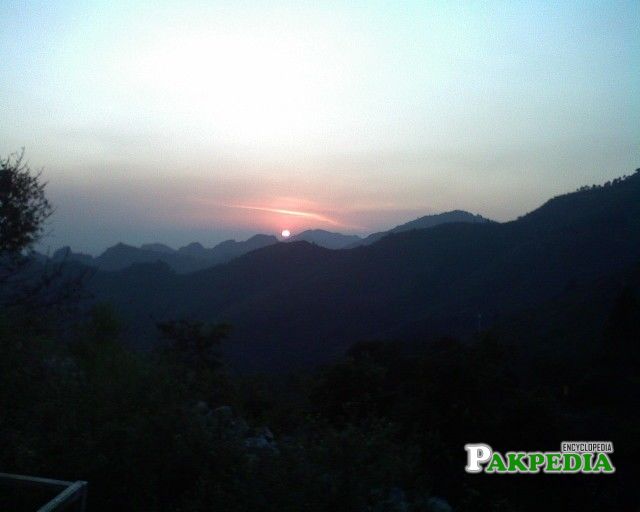 The lovely sunset vista on the Margalla Hills

The Margalla Hills National Park was instituted in 1980 and is located in Islamabad, the capital of Pakistan. It comprises the Margalla Hills (12,605 hectares), the Rawal Lake, and Shakarparian Sports and Cultural complex. The hill range nestles between an elevation of 685 meters at the western end and 1,604 meters on its east.The National Park is the most accessible in Pakistan due to its close proximity to the national capital, Islamabad. There are several hiking trails, with the most famous being Trail 3 and trail 5. It is also home to a large number of birds such as larks, paradise flycatcher, black partridge, shrikes pheasants, spotted doves, Egyptian vultures, falcons, hawks and eagles. Reptiles such as the Russell's viper, Indian cobra and saw-scaled viper are found here. 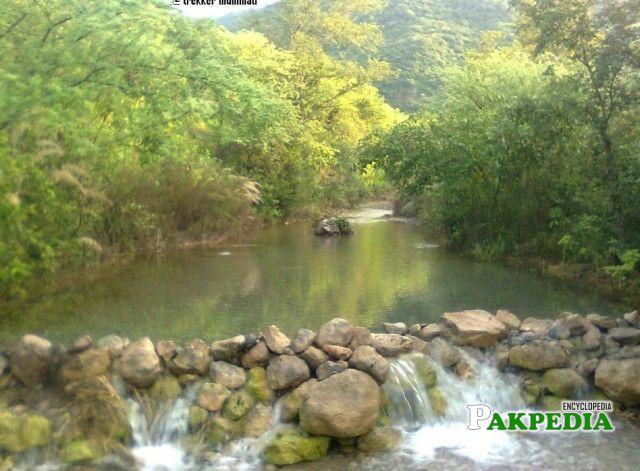 A splendid lake somewhere amidst the Margalla Hills

Margalla hills have beautiful torrents gushing down in the monsoon and also natural springs. Margalla has a variety of mammals, they include the leopard, gray goral, barking deer, wild boar, jackal, red fox and the porcupine among others. 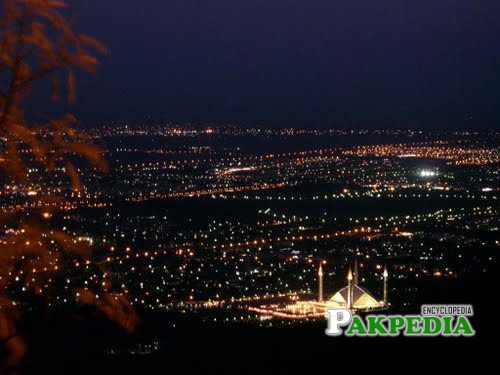 Millions of years ago, these mountain peaks didnâ€™t exist. The Asian continent was mostly intact, but Indian subcontinent was an island floating off the coast of Australia. Around 220 million years ago, around the time that Pangea was breaking apart, subcontinent started to move northwards and travelled some 6,000 km before it finally collided with Asia around 40 to 50 million years ago. Then, part of the Indian landmass began to go beneath the Asian one, moving the Asian landmass up, which resulted in the rise of the Himalayas. It is thought that Indiaâ€™s coastline was denser and more firmly attached to the seabed, which is why Asiaâ€™s softer soil was pushed up rather than the other way around.

A brilliant escapade in the Margalla Hills at dawn

The rock formations are 40 million years old, and fossils of marine life abound, it is a clear indication that before the continent collision, these hills were the seabed of the ancient ocean. Fossils of seashells, plants, petrified wood and early sea life Yorgia waggoneri are abound. These hills are the starting point of the Himalayas. The vegetation of the southern slopes is short stuttered, comprising deciduous and evergreen trees with diverse shrub growth. In the north, stand pines and groves of oak. The fauna is mainly Indo Himalayan, with some overlapping of Palearctic species. The birds found here are residents as well as winter migrants from higher altitudes of the north, spring and summer visitor for breeding, and short day transit species arrive in spring.[3]Â  Margalla Hills National ParkÂ

Mammals in the park include:

Reptiles in the park are: 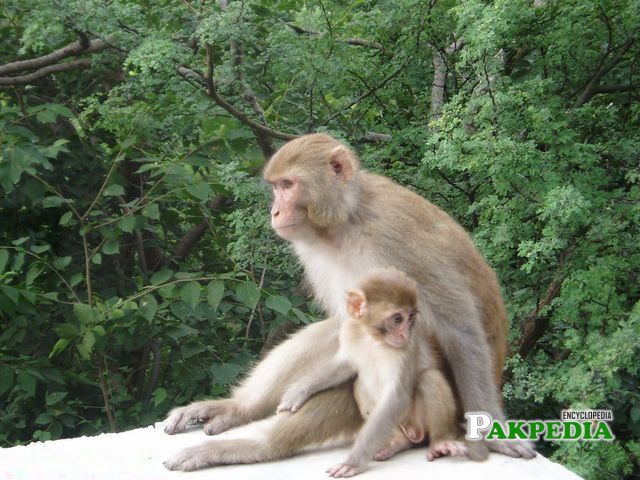 Monkeys around the Margalla Hills on daily basis, an attraction

The things to keep in mind are the wild animals which include the Snakes and Tigers. Local community faces them few times so get well prepared if you want to go on the top. Although there are rare chances to meet some wild animals on the way but your mind should be prepared for it. Local community is familiar to them and know very well that how to avoid the wild animals.Before the 1970s the Magalla hills were un-explored but after the transfer of Capital city this area got the attention of visitors. There are few other species which could be finding on the Magalla hills. This area is full of wild life but only the few numbers of dangerous animals exist here. This place is heaven for the nature lovers and offers them the great scenes.

Margalla Hills caters to wild animals as well, like this recently spotted Leopard

For the first time in six years, leopards have been seen on Margalla Hills.A resident of Talhar, Mohammad Jamroz, said animals of villagers had gone missing during the last few days.He said it was normal for shepherds to lose some animals from their herds, but they always returned. However, for the last few days, villagers have found the carcasses of their animals. Five goats had been found dead in the woods and it had seemed like they had been hunted by an animal. A horse went missing next and was found dead the following day.Villagers had then spotted the leopards in different locations on the hills. The big cats have been spotted near Faisal Masjid and Pir Sohawa and some were seen at different places on the road leading to Pir Sohawa from Marghazar Zoo.Mohammad Jamroz said the leopards donâ€™t come into the villages and do not attack people unless they were teased.The last time leopards were seen in the hills was in 2009. [4]Â  Leopards Seen on Margalla HillsÂ

There are many spots for rock climbing in Margalla Hills. Few crags have been developed but, still a lot of potential available to explore virgin lines.For beginner level climbers, following Crags are suggested:[6]Â  Rock ClimbingÂ  Although, sport climbing is becoming increasingly popular among the youth of Rawalpindi and Islamabad.but, only few local climbers can climb at advance level. Therefore, most of the crags remain uncrowded.
Disclaimer: As an encyclopedia, pakpedia.pk's articles contains shared information which has collected from different sources and people. We welcome everyone for corrections and updates, Thank you.

Murree is a colonial era town located on the Pir P

Gojal is home to the Wakhi People.The Wakhi people

Gulmit is the region of Gilgit territory in the G

Shogran is a hill station situated on a green plat

The Kalash or the Kalasha are the only pagan minor

Passu is a village on the Karakoram Highway, besid