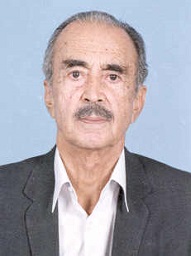 Malik Allah yar khan was a Pakistani politician who fought with the cancer disease and took his last on 5th April.

Malik Allahyar khan was born on 2 June 1927 in Khunda, a small village in Attock District. His father, Malik Khaki Jan, was a landlord of the area given the title of Khan Bahadur by the British government. His mother, Bibi Beherawar Sultan, was the daughter of a Muslim Barrister from N.W.F.P Mufti Fida Muhammad Khan. He had five siblings, four brothers and a sister. He was educated at Gordon College, Rawalpindi and Zamindar College, Gujrat. He had the distinction of being the champion in an all Pakistan debating championship. While in college, he became interested in politics and was a senior member of the Muslim Students Federation. He held long marches against the Cripps' mission Template: Cittaion needed and was imprisoned for a period of six months. He did his LLB from Law College, Lahore. He was married on 28 January 1950 to Bibi Miluk Bano, daughter of Sardar Dost Muhammad Khan. After completing his studies he set up his practice in Campbellpur (present day Attock). [1] Biography and Education

Allahyar Khan worked as member of Pakistan’s first parliament from August 1947 to October 1954. He was the senior most parliamentarian in the previous National Assembly and had been elected from NA-58 Attock-II in the 2002 elections by begging 89,108 votes out of a total 156,440 votes polled under the platform of PML-Q. Later, he was appointed chairman Public Accounts Committee (PAC) of the National Assembly. Despite his affiliation with the PML-Q, he reportedly developed serious differences with the district nazim of Attock and filed a petition signed by 140 parliamentarians with the government to raise some accountability issues against the nazim. Later, he formed a separate group during the last local government elections in coordination with Malik Amin Aslam, then minister of state for environment, named Ehtasab against Khatar group of district nazim Tahir Sadiq Khan. A few months before dissolution of the last National Assembly, Mr Allahyar suffered from a chronic disease which ultimately restricted him from taking part in the February 18 elections.  The PML-Q allotted ticket to his son Mr Aitbar for PP-19 Attock-V, which led to reconciliation with his political rivals, the district nazim [2] political career

Veteran politician and senior parliamentarian Malik Allahyar Khan was laid to rest at his native Kunda village on Saturday evening. The veteran politician died at Fauji Foundation Hospital on Friday night at the age of 85. He was admitted to the hospital about six months back after he suffered some neurology problem and underwent brain surgery. Allahyar Khan has left behind a widow and two sons - additional secretary ministry of science and technology Malik Shehryar Khan and MPA Malik Aitbar Khan - to mourn his death. His funeral prayer was attended by a large number of people from all walks of life. Prominent among them were former ministers Umar Ayub Khan, Raja Basharat, Sarwar Khan, Gohar Ayub, MPA Shujah Khanzada and PML-N leader Malik Sohail Khan.
Disclaimer: As an encyclopedia, pakpedia.pk's articles contains shared information which has collected from different sources and people. We welcome everyone for corrections and updates, Thank you.