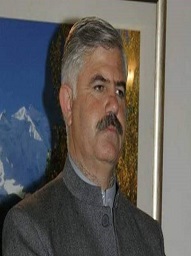 Mahmood Khan served the Ministry of sports in KpK during PTI's government and did a lot of work in sports because of his interest. After winning 2018 General Elections he became the Chief Minister of KpK on August 2018 by giving a major defeat to his opponent.

Mahmood Khan is a Pakistani politician who is serving Khyber Pakhtunkhwa since 2013. He was born on 30th October 1972 in Swat and is fond of sports. His wealthÂ consists of 89 Kanal of agricultural land and 150 shops in Swat's Malta Bazar worth Rs 2.516 billion.

; Mahmood Khan has received his early education in his city Matta from Government primary school and then completed his high school education from Peshawar public school and College. After completing high education he did Masters in Science from Agriculture University Peshawar.

Mahmood Khan is fond of sports and has a huge interest in it since childhood. He also served as the sports Minister during PTI government in KpK. He organized 6000 sports for players in 2015, 8000 sports in 2016, while in 2017 he organized 11000 sports for the players of KpK. Other than that he also gave the educational scholarships to the winners and sponsorships to the players.Â Because of his interest in sports, he did a lot of work in Peshawar related to sports and he is the only politician who did a lot of work for the players in order to promote sports.

His political career started in 2005 when he was elected as Union Council Nazim in his own city where he was born. Previously he was the member of Pakistan Peoples Party but he quit PPP and joined PTI in 2012.Â He elected the General Elections 2013 and won by securing 11071 votes while his opponent ( member of Awami National Party) gathered fewer votes. After that his actual political career stated and he was appointed as the Provincial Ministry of KpK for sports, culture, and Museum. In 2018 he elected the General Election from Pk 9 Swat and won the Elections by securing 25630 votes giving defeat to his opponent Muhammad Ayub Khan (candidate of ANP).

Elected as Chief Minister of KpK

After winning 2018 elections his name was recommended for the chief minister of KpK by Pervaiz Khattak.Â On 16th August 2018,Â he won the seat by securing 77 votes while his opponent Mian Nasir Gul lost the battle by securing only 33 votes which is a major victory indeed.Â
Disclaimer: As an encyclopedia, pakpedia.pk's articles contains shared information which has collected from different sources and people. We welcome everyone for corrections and updates, Thank you.

Chaudhry Nisar Ali Khan is a senior politician in