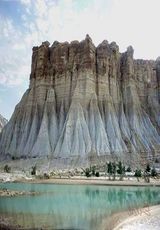 Lasbela is a coastal district of Balochistan province of Pakistan. It became a separate district in Kalat Division on 30 June 1954. The name is derived from the words Las which signifies a plain, the greater part of the area being a flat plain, and Bela which means “jungle” and is also the name of the principal town of the district. Uthal is the district headquarters. The district is divided into 9 Tehsil and 21 union councils.[1]  Lasbela Lasbela was notified as a district on 30th June, 1954. In October, 1955 the unification of the former provinces of Punjab, NWFP, Sindh and Balochistan took place. The Balochistan States Union was formed into Kalat division. But in December 1960 Lasbela became a separate district and was placed as a part of Karachi division. Later on it was transferred to Kalat division of Balochistan Province.

The district of Lasbela derives its name from the words LAS which signifies a plain, the greater part of the area being a flat plain, and Bela, the principle town of the district. Uthal is the district headquarters.[3] Derives Its Name The main river is the Porali with its tributaries, Winder and Wirhab rivers. Other rivers are the Phor and Hingol which rise in Awaran District before flowing through Lasbela on their way to the Arabian Sea.[4]  Geography

The population of Lasbela presents many features of special interest to the ethnologist. The first historical reference to the ancient population of Lasbela and Makran is to be found in Arrian, who divides the population into two distinct classes. The people of the coast whom he names the Ichthyophagoi or fish-eaters and the population of the interior, the Arabi, the Oreitai and the Gadrosia of Gadrosia or Gedrosia. Several other authors have described the strange race of the Ichthyophagoi who are undoubtedly identifiable with the present fishermen of the coast.

The principal tribes among the Lasis claim to be descendants of the Sumras and Sammas who formerly resided in Sindh. Their tribal names certainly indicate that many of them are of Hindu origin. The term Lasi is a geographical name, which is applied to all the tribes other than Baloch and Brahvi, Med, Khoja and Hindus who are settled in Lasbela. The principal Lasi tribes are only five in number, namely Jamot, Ranjha, Sheikh, Angaria and Burraf. These are called the Panjraj or the five tribal confederacies. Under each Raj are a large number of heterogeneous groups.

The few Afghans are mostly nomads, except the Buzdars, who are flock owners and wander about in Niabat, and the Gichkis who are connected with the Jam of Lasbela. Minor tribes include the Gunjas, Sinars, Sangurs, Burfats, Chhuttas and Khojas. A good number of Hindus are also residing in Uthal, Bela and Hub. They are all of the Arora caste. The Hindus are mostly of the orthodox school, but they are not strict in the observance of their religious rites and have modified several of their ordinary daily customs. Among other tribes are the Babbar, Gadras, Langhas and Koris. [7]  Minor Tribes These are the most central hotels in Lasbela. Lasbela in Sindh (region) is a place in Pakistan – about 703 mi (or 1,132 km) South-West of Islamabad, the country’s capital city.[11]  Lasbela Hotels

The district of Lasbela is divided in 5 tehsils and 22 Union Councils.[12]  Administration of Lasbela Cultivation depends upon flood irrigation, with jowār (sorghum) and oilseeds being the chief crops. Sheep, camels, and goats are bred extensively, and fishing is important along the coast. Sonmiāni is the principal seaport.[13]  Cultivation

The tomb of General Muhammad-Ibn-Haroon, who accompanied Muhammad-Bin-Qasim. is a place of historical importance in the town of Bela. On the west-side of the Purali river, the tomb of Sir Robert Sandeman, made of granite and white marble and surrounded by beautiful gardens, bears a testimony to the cultural heritage of this town. The Jamia Masjid is an exemplary accomplishment of Islamic architecture. The caves at Mai Goudrani, hewed out of solid conglomerate rock situated 20 km. to the north of Bela town, are worth visiting.[14] Famous Tomb
The tomb at Himidan is situated near the confluence of Himidan rivulet and Hub river about 85 km. from Karachi. The cemetery in which these tombs were placed contains a considerable number of  Muslims graves.