He was born on 1 Apr 1967. He was enlisted in the Army on 10 December 1984. He was serving in Northern Light Infantry Regiment when skirmishes broke out in Kargil in 1999. Havildar Lalak Jan of the Northern Light Infantry Regiment fought from the forefront to thwart heavy Indian attacks. He volunteered himself to be deployed on the front positions located at the jagged peak in May 1999. Havildar Lalak Jan repulsed back many aggressive ventures by the enemy and imposed colossal losses on them. On 7 July 1999, Havildar Lalak Jan sustained serious injuries as enemies pounded the area with heavy mortar shells. But despite being injured, he retained his position and frustrated the Indian assault. Due to severe injuries he embraced martyrdom. [1] Lalak Jan –  Pakistan 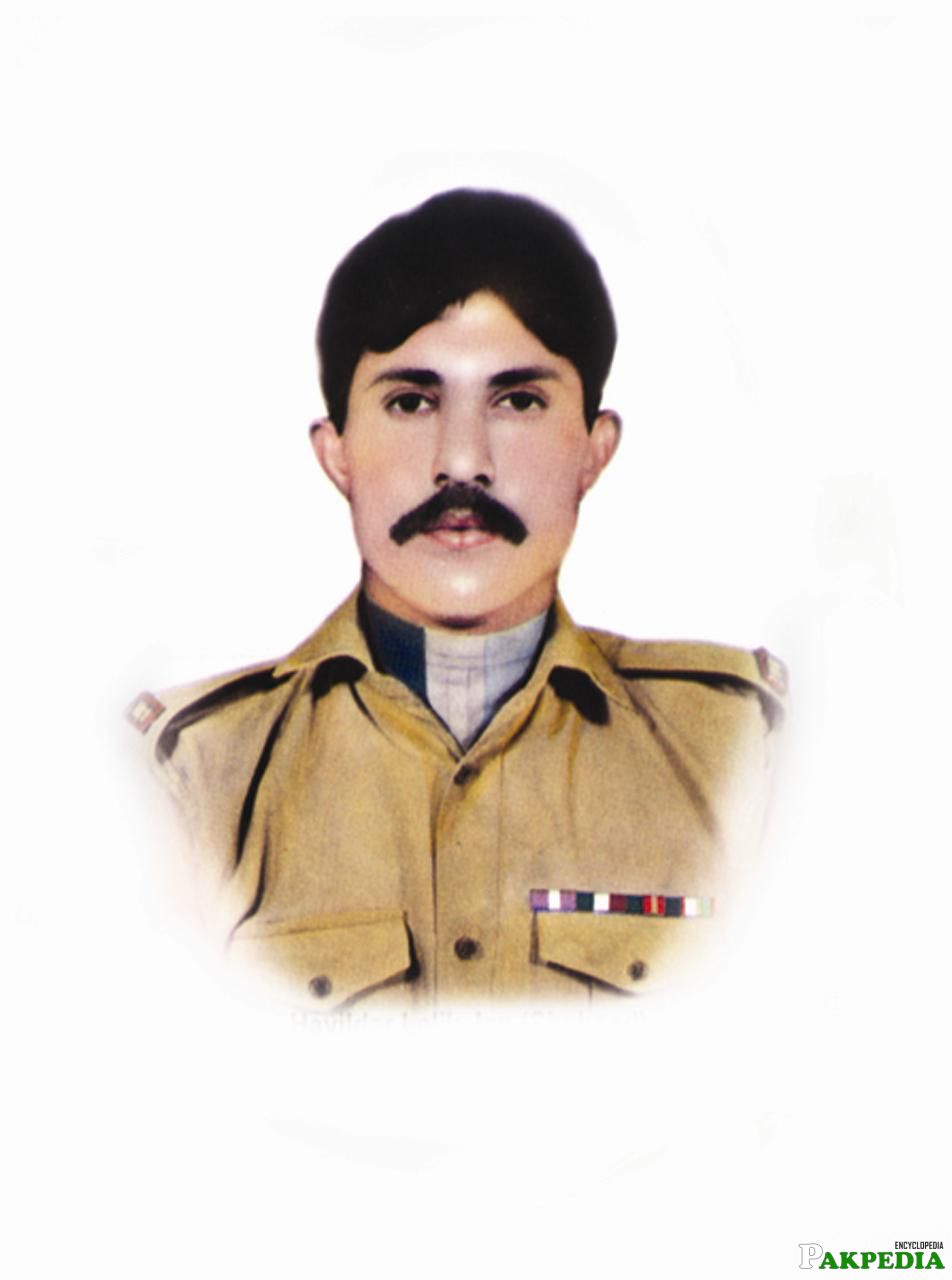 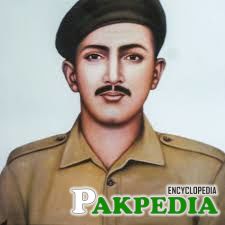 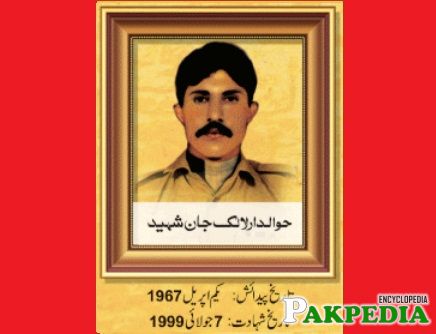 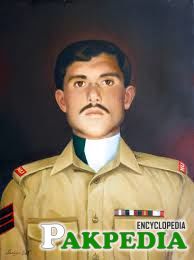 Tiger Hill in the Kargil Sector had been occupied by around 130 men of 12th NLI (Northern Light Infantry) unit of the Pakistan Army. These men were under the command of Subedar Sikander, who was given the responsibility to capture Indian territory (which was under Indian control after the Indo-Pakistani War of 1971). Havaldar Major Lalak Jan was his 2IC (second in command).[2] Kargil War of 1999 –  Lalak Jan The men of 12th NLI were ordered by the Subedar to change their positions while firing back at the Indian forces.

In 1984, India occupied the Pakistani posts at Siachen glacier. These posts had been vacated due to winters and snowing in the northern areas of Pakistan. India had in fact violated the Line of Control (LOC) in order to capture these posts. Pakistan’s efforts to take these areas back from Indian possession turned out to be futile, and a war was fought in the worst possible circumstances for 15 years without any significant reward to either side. [3] India occupied –  shaheed-martyrdom
The Indians posted an entire Division at Siachen Glacier. The ammunition and food was supplied to this division through the Srinagar-Leh Highway, the road joining the area of Leh (Siachen) with the capital of Jammu and Kashmir, Srinagar. The area surrounding the road was mountainous, with Tiger Hill being the peak that offered the best view of the entire northern area, providing those who were on it with a terrific aerial advantage. The Indian had previously used this peak to attack some defensive positions of Pakistan from time to time.[4]  associated sectors –  Havildar Lalak Jan Tiger Hill, located in the associated sectors of Batalik, Kargil and Drass, provided and aerial view of the Srinagar-Leh Highway. In September 1998, the posts had been vacated by India as part of a routine winter exercise, they were to reoccupy them in the summers.

On 15 September 1999, the commanding officer of 12th NLI sent two Special Service Group Comando groups to Tiger Hills to recover the body of Lalak Jan. The two forces were designated ‘Ababeel’ and ‘Uqaab'(Eagle). Ababeel provided the fire cover while Uqaab went into the destroyed enemy bunker to retrieve the body of Lalak Jan. When his body was found, Havaldar Lalak Jan had his AK-47 firmly clenched to his chest.[5] 15 September 1999 – Shahadat

Pakistan awarded him the Nishan-e-Haider, Pakistan’s highest military award, for extraordinary gallantry. Only ten soldiers have ever received this honour. Jan was the first person from the Northern Areas of Pakistan to receive the award.

On 1 July 1999, the 18th Grenadiers Battalion (India) launched a fierce attack on Tiger Hill, occupied by the Pakistani Army, under cover of heavy artillery shelling around the bunkers. Subedar Sikandar sneaked across the Line of Control and placed his men in well-entrenched positions, and managed to repulse the attack without any loss of life on their own part. Exact casualty figures for the attacking Indian 18th Grenadiers Battalion, are not available.[6] attack on Tiger  Hill – Lalak Jan Shaheed

On the morning of 2 July 1999, hoping to use the cover of the mist, the 18th Grenadiers launched another intense attack on Tiger Hills. Realizing the great difficulty in holding their previous positions that had been spotted and zeroed-in by the Indian artilliery deployed below, Subedar Sikandar ordered his men to retreat to secondary positions around a secret bunker. Once the men were secure, he directed Lalak Jan to descend Tiger Hill and, amidst the Indian Artillery shelling, plant the landmines in the area in front of the Indian forces. Though this was deemed a nearly impossible task by all, the Subedar and the 2IC agreed that this task was very important, if they were to make a dent in the Indian offensive. Planting the landmines was the only way for them to neutralize the Indian armor and artillery, as the men of 12th NLI did not have any heavy/armour-piercing weaponry; their light-attack unguided (RPG-7)s were inadequate for the task. They were hoping that the mist under which’s cover the Indians were attacking, would help Lalak Jan as well, and that the Indians would not be expecting such an audacious and surprising move from the men holed up above.

Lalak Jan put a bag of explosives on his back, and while shouldering an AK-47 descended Tiger Hills for the second time, again amidst heavy Indian shelling. Managing to avoid being seen by the Indian forces, and utilizing his knowledge of the surrounding hills to take cover, he located the secret bunker and threw the explosives inside the bunker.
The bunker, which incidentally was also an ammunition dump, blew up in a very big blast. Lalak Jan managed to take cover, and the Indian Army lost 16 men inside and nearby the bunker. The other Indian soldiers saw Lalak Jan and opened fire on him. Surrounded from all sides by Indian fire, Lalak Jan made a valiant effort to resist and returned fire.[7] secret bunker  – Pakistan

Lalak Jan is officially known as Havaldaar Lalak Jan Shaheed Nishan-i-Haider. He was born in Yasin, District Ghizer, in the Northern Areas of Pakistan. After schooling he joined the Pakistan army and was promoted to the rank of Havaladaar.[8] officially known – Lalak Jan
The Monument of Freedom, standing tall in Chinar Bagh – Gilgit city, is a testomony of the fact. In the 1948′s war of independence the highest number of martys belonged to Hunza Valley and the Ghizar Valley, both predominently Ismaili regions. [9] Nishan-e-Haider – Shaheed Havaldar Lalak Jan Shaheed Havaldar Lalak Jan (Nishan-e-Haider), an Ismaili, is the modern icon of patriotism and martial commitment. He was awarded Pakistan’s highest military award, Nishan-e-Haider (named after Hazrat Ali), by the government of Pakistan in recognition of his unrivaled bravery, comradship, sacrifice and military leadership

Havildar Lalak Jan was born on April 1, 1967. He was awarded Nishan-e-Haider for his dauntless courage and devotion during the Kargil war in 1999.

Lalak Jan was enlisted in the Army on 10 December 1984. He was serving in Northern Light Infantry Regiment when skirmishes broke out in Kargil in 1999.