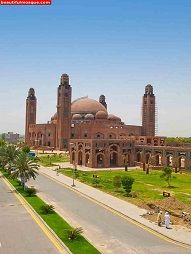 
Lahore Museum includes a collection of musical instruments, ancient jewellery, textiles, pottery, and armory. There are important relics from the Indus Valley civilisation, Gandhara and Graeco-Bactrian periods as well as some Tibetan and Nepalese work on display. The museum has a number of Greco-Buddhist sculptures, Mughal and Pahari paintings on display.The Fasting Buddha from the Gandhara period is one of the most famous objects of the museum. The ceiling of the entrance hall features a large mural by renowned Pakistani artist Sadequain 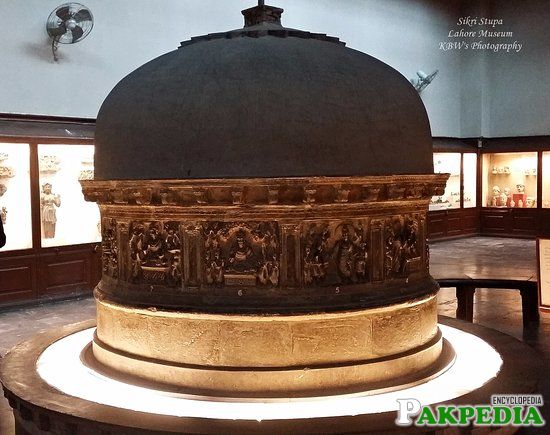 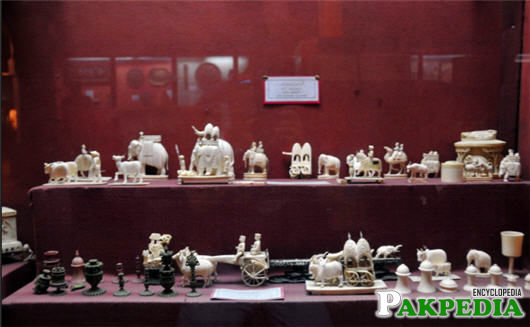 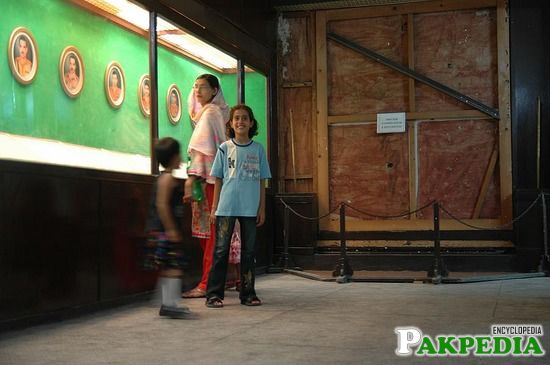 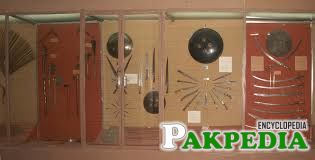 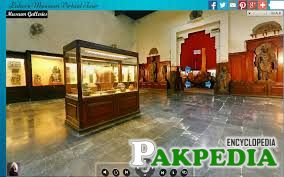 The Lahore Museum , was originally established in 1865-66 on the site of the hall or building of the 1864 Punjab Exhibition and later shifted to its present site located on The Mall, Lahore, Punjab, Pakistan in 1894. Rudyard Kipling’s father, John Lockwood Kipling, was one of the earliest and most famous curators of the museum.Over 250,000 visitors were registered in 2005.The current building of Lahore Museum was designed by the well-known architect Sir Ganga Ram. The Museum is the biggest museum of the country. A number of rooms have been under repair for a long time and others still show a rather old-fashioned and often rudimental display of objects, with Urdu captions only. [1] Museum  History

Collection of art in Museum

The Museum contains some fine specimens of Mughal and Sikh door-ways and wood-work and has a large collection of paintings dating back to the Mughal, Sikh and British periods. It includes a collection of musical instruments, ancient jewellery, textiles, pottery, and armory. There are important relics from the Indus Valley civilisation, Gandhara and Graeco-Bactrian periods as well as some Tibetan and Nepalese work on display. The museum has a number of Greco-Buddhist sculptures, Mughal and Pahari paintings on display.The Fasting Buddha from the Gandhara period is one of the most famous objects of the museum. The ceiling of the entrance hall features a large mural by renowned Pakistani artist Sadequain. The Museum displays archaeological material from pre-historic times to the Hindu Shahi period. It has one of the largest collections of archaeology, history, arts, fine arts, applied arts,ethnology, and craft objects in Pakistan.It also has an extensive collection of Hellenistic and Mughal coins. A photo gallery is dedicated to the emerging of Pakistan as a state.Its treasure of modern paintings, arts and crafts and ethnology are a national heritage beyond comparison. These collections attract research scholars, students and tourists from all over the world and constitute a unique cross-section of the cultural history of the Subcontinent. The Museum houses artifacts from many countries and regions such as Burma, Bhutan, Nepal, Tibet, Central Asia, the Middle East and Africa. [2] Collections Collections 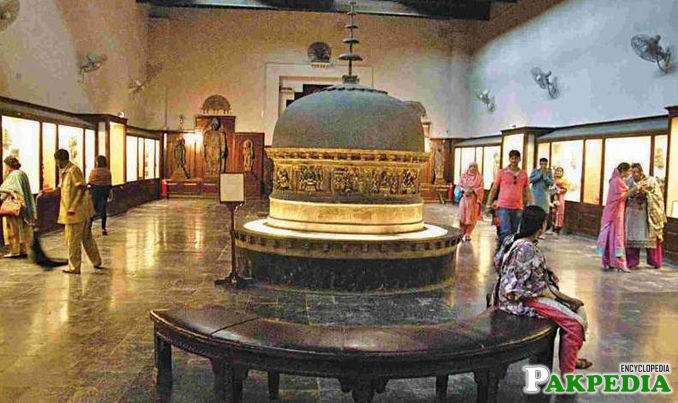 The Gandhara Gallery presents a number of friezes, panels and statues depicting the life story of the Buddha, from his previous incarnations, birth, youth, enlightenment, preaching of the law (Dharma) and death (Mahaparinirvana). Beyond these, along the other walls of the gallery, are the statues of the Buddha and the Bodhisattavas, panels and pieces showing foreign influence, architectural fragments, stucco and terra-cotta sculptures. Among the masterpieces are the famous Fasting Buddha, the Miracle of Saravasti (now usually identified as Sukhavati Heaven), a small Buddha head with traces of original gilding, and the standing figure of Athena. The friezes and other pieces of a reconstructed Stupa (in the centre of the gallery) are from Sikri near Jamal Garhi, District Mardan. In two display cases are displayed toilette trays, metal and stone objects, pottery and terra-cotta figurines, reliquaries and more, belonging to the Greek, Parthian, Scythian and Kushan periods. Placed next to them are a number of beautiful stucco heads from Rokhri in district Mianwali and terra-cotta heads from Akhnur in Jammu

The statue of Fasting Siddhartha ranks not only as one of the finest specimen of Gandhara Art but also as one of the rarest antiquities. This image shows an exceptional degree of Gandhara devices employed in the sculpture. This stele is traditionally believed to depict the scene of the Miracle of Sravasti. However, another opinion holds that it depicts Sukhavati -the paradise of the Buddha Amitayus. In the Miracle of Sravasti, the Buddha was challenged by six teachers of Rajagriha to participate in a contest of miracles before the King Prasenajit. The Buddha walked in air, flames leaping from his shoulders and water running from his feet. He then transformed himself into many images which floated in the air reaching up to heaven while he preached the Law.  [3] Gandhara  Art

The Coin Collection, with 40,000 pieces, is one of the largest in the Subcontinent. It includes the earliest examples of punch-marked coins issued in the seventh/sixth century BC during the time of the Achaemenian Empire. This collection represents almost all the ruling families of the region like Graeco-Bactrian, Indo-Greek, Mauryan, Indo-Parthian, Kushan, Indo-Scythian, Huns, Hindu Shahia, Arabs, Ghaznavids, the Sultans, the Mughals, the Durranis, the Sikhs, the British and the modern coins of Pakistan. This collection attracts the attention of scholars from all over the world for its rarity and richness.

The Indus Valley Civilization Gallery represents various stages of pre and proto history. The objects include Stone Age tools from Soan Valley - among the earliest objects produced by humans. The oldest in the gallery is from 500,000 years ago. The beginnings of civilization are represented by objects from Mehrgarh, a Neolithic period site in Balochistan famous for its continuous occupation by humans from 7000 to 2500 BC. The rest of the gallery exhibits objects from two large Indus Valley sites - Harappa and Mohenjodaro (3500 – 1500 BC), first excavated in 1920 by teams led by British archaeologists. The objects include: wheel-turned pottery, jewellery of terracotta, paste and semi-precious beads, measuring weights, toys, gaming objects, various other items of daily use made of clay and bronze, and bronze arrow heads and implements.

The Collection of Miniatures

The Lahore Museum  has one of the largest and most representative collection of miniature paintings in the Subcontinent. The collection was built in the early part of the 20th Century. It includes over a thousand paintings, ranging from early 16th Century to the 20th Century. These include leaves of Jaina manuscripts; significant examples of Persian, Imperial Mughal, Provincial Mughal and Bazar Mughal paintings; Rajput  miniatures from Rajasthan, and miniatures from the Punjab hill states, such as Guler, Basohli, Kangra, and Nur(pur). Specimens of Sikh portraiture and miniatures on ivory are also  interesting parts of this collection.

These have four sections - Nepalese, Tibetan, Burmese and Subcontinent. Most objects belong to the late 19th and early 20th century, however, a few pieces date back to 8th-10th centuries. The Hindu art collection in the Museum contains a good number of sculptures, images, statues and other objects made of stone, marble, wood, ivory and other materials. Various architectural pieces depicting outstanding artistic achievement are also part of the collection. Some of the highlights of the collection include a large lingam with the head of Shiva discovered from a site near Jhelum, a beautifully carved figure of Vishnu, a stone piece with sculpted figures of Shiv and Parvati dating from 7-8th Century found from a site in Lahore, and a large sculpted architectural piece depicting Durga as Mahishasuramardini (slayer of the buffalo demon).There are several architectural pieces from ‘Murti’ a Jaina temple in Salt Range in this collection. The gallery has a collection from Nepal - wood carvings, painted tankas, papiermache objects, metal work, jewelry, statues of gilded bronze predominantly representing the Tantric cult. These objects date from the sixteenth to the twentieth centuries. Tibetan art in this gallery’s collection comprises of sculptures, paintings and jewelry while the Burmese contains mainly lacquer work objects, and wooden craft and a beautiful gilded Buddha sitting on a throne under three umbrellas.

Approached through a magnificent carved wood doorway from Jhang, the Manuscripts Gallery has sections comprising Quranic, Persian and miscellaneous manuscripts such as of Hadeeth, history, geography, encyclopaedia, guides, biography and literature. Quranic manuscripts are in Kufic, Magharabi, Naskh and Bahar styles of Arabic scripts. Most of the manuscripts have been scribed either in Naskh and Nasta’aleeq or some variants of the two. Manuscripts are illuminated, decorated and illustrated.

The Museum has a unique collection of modern Pakistani paintings by well-known artists of the country and a number of Bengal School paintings. It also has the only ceiling mural ever made in Pakistan, by Syed Sadequain Ahmed Naqvi. Comprising of 44 panels, each 8' x 5.6", this mural spans 96'x24', and symbolizes Pakistan's cultural and artistic heritage.

The Collection of Islamic Art

The advent of Islam in the beginning of 8th century from the South and 11th century from the North ushered in a distinct era for the arts and crafts of the subcontinent, a selection of which is presented in the Museum's Islamic Arts Gallery. The Sura Yasin from the Holy Quran has been calligraphed by the famous artist Sadequain all along the top of showcases in this gallery and runs over a length of 269 feet.

The Freedom Movement Gallery narrates, with the help of paintings, photographs and newspaper cuttings, the story of the struggles for freedom, from 1757 to the creation of Pakistan in 1947.

The Arms and Armaments gallery presents an array of Hindu, Muslim, Sikh and early British period arms and armoury. It features arrows, Khandas (the straight bladed daggers of the Rajputs), sacrificial dahs (sword), elephant goads and more. Weapons from the Muslim period include spears, curved swords with steel blades soaked in black crystal water with plain and engraved hilts, inlaid and enameled shields, mail coats and helmets, breast plates, and arm and leg-guards. Sikh period weapons include knives, daggers, spears and lances. At one end of the Gallery is a gun barrel, mounted on wooden pedestal, belonging to a Sikh, Sardar Fateh Singh and dated Samvat 1855 Bikrami / 1798 A.D. It was found in a village near Pattoki, Punjab. During the British period, a shift in the weaponry of the region took place, with the introduction of match-lock and flint-lock pistols, and guns and cannons.

In the next hall to the left are stucco sculptures

Pakistan Maritime Museum is a naval museum and par