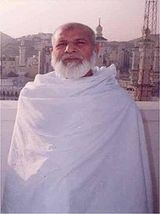 Allama Khalid Masud was a well known Muslim scholar of Pakistan.He spent the most part of his life with Moulana Amin Ahsan Islahi. He spread ideas and thoughts of his teacher and Imam Farhi to general public.Allama wrote a number of books,articles and delivered lectures on Islam, science and other subjects. By professionally, he was a chemical engineer but he spent his life in serving Farahi’s school of thought.[1]  Allama Khalid Masud He joined Industries Department, Govt of Punjab in 1958. He worked there for 27 years. In 1985 he was offered position of Research Scholar in Quaid e Azam Library, Bagh e Jinnah Lahore. He worked there till his retirement in 1996.

During his student life (from 1956–1958), he remained in-charge / Nazam of Islami Jamiat-e-Talaba Lahore. In 1958 Maulana Amin Ahsan Islahi separated from politics and Jamat-e-Islami and created a Halqa Taddabure Qur’an-o-Hadith. Khalid Masud was one of his early pupils who joined his Halqa. He associated himself with Maulana Amin Ahsan Islahi in 1958 and remained with him till his death.

Khalid Masud did a major role in converting knowledge of his teacher from his lectures into text for the benefits of the public. He also helped him in writing his famous tafseer Taddabur-e-Qur’an. Maulana Islahi had admired a number of times his efforts in spreading Farahi’s school of thought. Maulana Islahi appointed him Nazam of his Idara Taddabure Qur’an-o-Hadith and chief editor of his quarterly journal Taddabur in 1981. He served his teacher and idara for twenty two years till his death in 2003.[2] Major Role

He wrote a number of article during his service in Punjab Industries Department Lahore.

Number of Books for Children

He had been suffering from hepatitis C for a number of years. He died on 1 October 2003 at 2:20 pm in Jinnah Hospital Lahore.Famous scholar & Companion of Islahi School of thought Allama Javed Ahmed Ghamidi offered his funeral prayer at Dongi Ground Samanabad Lahore. He was buried in his native village Lilla District Jehlum with his ancestors.

After death of Maulana Islahi, management of Madras Ul Islah, Siray Mir Azam Garh UP India arranged Imam Farahi Seminar in January 1999 and especially invited Allama Khalid Masud in place of Maulana Islahi.He presented two papers there. They offered him chair of Imam Farahi for presiding the seminar. He wrote a number of books on Qur’an, Hadith, Grammar, Islam and Science for all ages. Abridged version of Maulana Islahi’s Tadabbur-i-Qur’an in one volume. Based on Allama Hamiduddin Farahi’s Arabic books. He converted it into Urdu Language for the benefit of the general public. He converted audio lectures of his teacher Maulana Islahi into books by editing and adding and deleting necessary / unnecessary portions. In this book he tried to discuss and to clear some issues related to life of Muhammad in the light of Qur’an with a different and non-traditional approach. In this book he adopted a different non-traditional approach. He put Quran as first source of history. Then he accepted those narrations which match the Quran’s statement. He did not accept any narration which was in contradiction Quran.