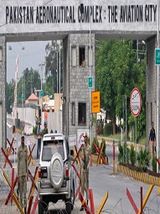 Kamra Airbase situated at Kamra, Attock District Punjab Pakistan.It also called Minhas base and Kamra Airbase is a PAF Airbase.It was given name in the respect of Pilot Officer Rashid Minhas Shaheed. He was awarded the Nishan-e-Haider for bravery in the Indo-Pakistani War of 1971.Pakistan (related to space travel) Complex is Situated in kamra Airbase, which manufactures aircraft like CAC/PAC JF-17 Thunder, PAC MFI-17 Mushshak, Hongdu JL-8. Pakistan Aeronautical Complex is situated 70 Kms from Islamabad near Attock city. Complex houses four aviation factories and is spread over 10 square kilometers. Over 10,000 employees support the role and task of PAC Kamra. It is governed by an autonomous body known as PAC Board. The Board comprises the Chairman and five members. In addition to exercising executive control over the Board, the Chairman directs and guides functioning of all the four factories of PAC which are headed by respective managing directors.[1]  Pakistan Aeronautical Complex

The militants were said to be armed with automatic weapons, grenades and suicide vests. Intense exchange of fire between militants and security forces ensued after the attackers infiltrated the base located in Attock, Punjab.PAF officials confirmed that all seven attackers had been killed. One Pakistani soldier also lost his life in the attack, confirmed officials.[2] Confirmed Several squadrons of fighters and surveillance planes are said to be housed at the Minhas base. Over 30 planes were parked at the base, including JF-17 Thunder fighter jets at the time of attack.[3] Attack